WHAT DOES IT MEAN TO BE A SUSTAINABLE DESIGNER TODAY?De-tangling the web the creative industry spins.

As creatives, one of the biggest challenges we face today is how to position ourselves in a society of rapidly changing economics, climate emergencies, and muddied legal waters.

Concerns such as these will inform the discussion we aim to digest this December at the radical collaboration lab, Doughnut Economy. Kindly supported by Pictoright Fund, we hope to identify what role factors like ethics, profit, creative rights and authorship play in integrating sustainable designers into a circular economies, such as Kate Raworth’s Doughnut model. Growth in economic terms is no longer sustainable in meeting both social and planetary goals, but does this mean as creatives we need to sacrifice our own economic success? Freelancers, corporations, and charities alike all have a responsibility to protect our future, but how we achieve this is often unclear.

Below, we’ve compiled a list of examples in which the creative position is examined through the lens of business, circularity and ethics. From a publication documenting the often precarious situations of an artist, to the public backlash against controversial corporate funding of major art institutes, to an online site that identifies employers who pay their interns a living wage. Through topics like these, the question of what it means to be a designer in the 21st century is explored.

THIS IS A WORK OF FICTION

This is a Work of Fiction is a 160 page book that documents the precarious position of living and working as an artist. Alina Lupa comprised the story of both real and imagined situations to lead us through the vulnerability of artistic profession, calculating the many compromises made along the way. Alina is a post-conceptual artist and writer, whose work often explores the social aspects of an artist’s life, and the impact they can have on their surroundings. 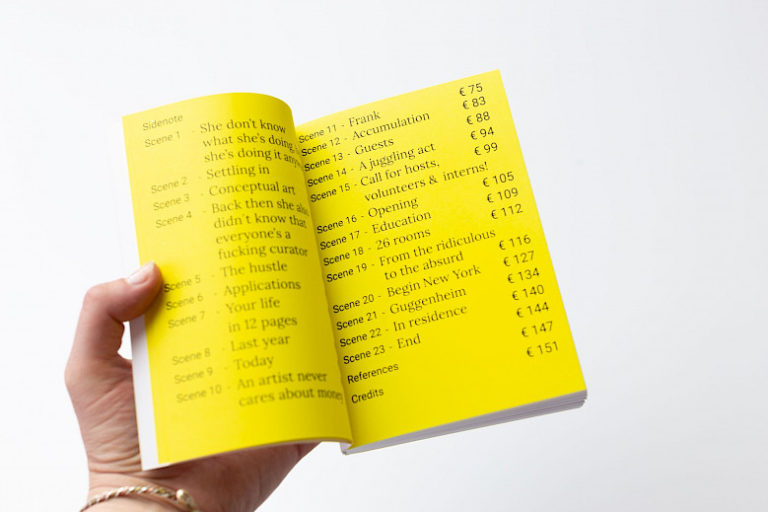 Alina Lupa – This is a Work of Fiction

Scottish filmmaker Duncan Cowles uses humour to approach the difficulties of being a freelancer in his film, Taking Stock. The film tells the story of Cowles’ recent endeavours to make some extra cash by producing stock footage, and the grim reality that working in the creative industry can bring – such as still needing to live at home, and making little money for a lot of effort. The film, both funny and relatable, stands as a representation to what many creatives and freelancers face everyday. Cowles hopes to inspire those in similar situations to cut themselves a bit of slack, especially in a career that isn’t exactly straightforward or predictable. Cowles also uses his experience to give workshops and lectures to aspiring film-makers and creatives: from drop-in children’s classes, to universities, to platforms such as Nicer Tuesdays. 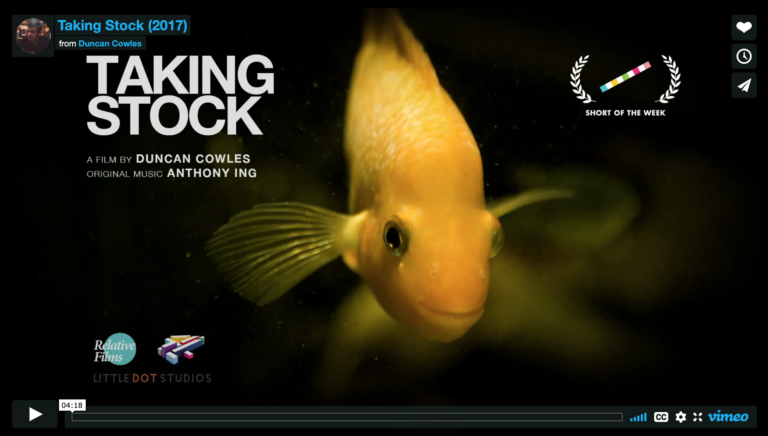 Anna Zimmerman’s 2019 DAE graduation piece explores the possibility of creating modular tools for freelancers. The tools are designed to create improved working conditions and ownership for the growing number of freelancers today: Freelancing lacks the obvious benefits of working in an office, and New Office aims to replicate to an extent, the variables of such benefits. The new visual identity, such as a fake shirt for video calls, a reversible vest with a ‘free’ and ‘busy’ side, or a barrier to mark an individual’s working area, creates the playful reference to a traditional office, allowing users to claim their space and boost confidence. 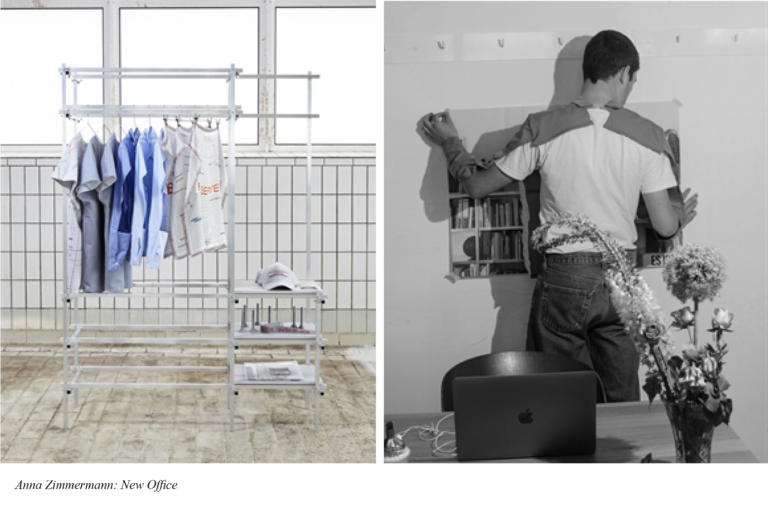 Dara Huang’s modular housing system Vivahouse allows for disused commercial buildings to be turned into co-living spaces, with young freelancers and the self employed designed in-mind. With the first model opened in London’s empty Whitely shopping centre, the company aims to tackle the UK’s low housing availability and high freelance population by providing accommodation, communal working spaces, bills and toiletries at around £600 per month – 50% less than most short-stay urban spaces. The units can be built up to form communities, providing the beneficial social interactions that freelancing often lacks. 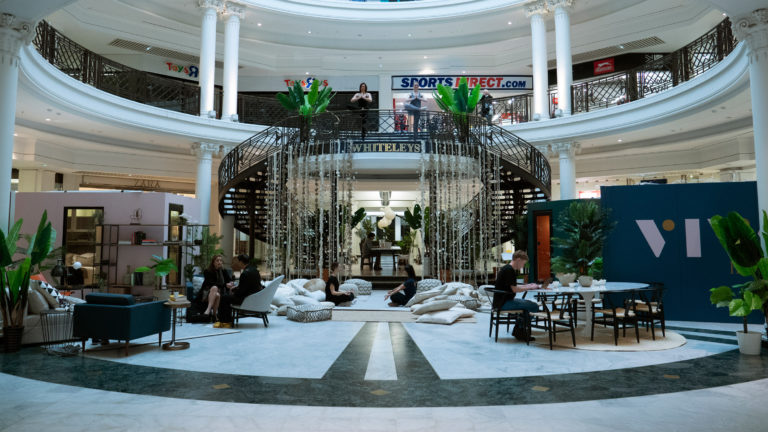 Anna (Absolutely no nonsense admin) is the world’s first ‘design-led’ banking service. It aims to help small businesses manage their invoicing and payments. Comprising of a business current account, debit card, app, and hybrid AI service, Anna seeks to bring a sense of emotion to finance, and ease of admin for small, creative businesses. The brand’s identity of orange illustrations and simple layout is designed to be approachable and relatable, in which users can feel a sense of calm and enjoyment in otherwise mundane tasks. The app permits start-ups, freelancers and creative organisations to feel in-control of their finances, which can often be a daunting prospect starting out. 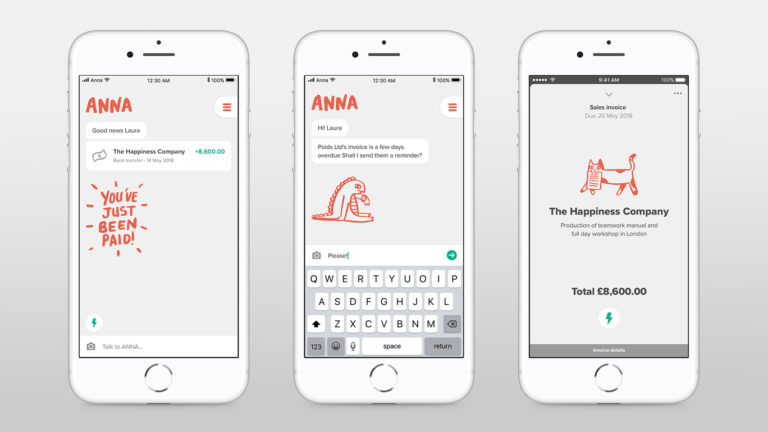 MAKE YOUR OWN MASTERS

When British design graduate Stacie Woolsey learnt she’d have to save around £40,000 to take a masters course at schools like the Royal College, she decided to take matters into her own hands. Even when such a broad range of courses exist, Woolsey couldn’t justify the value of taking a course of such expense, when it wouldn’t be exactly tailored to her needs. She explored the possibility of creating her own masters by approaching four designers and studios whose work directly interested her, and asked them to set her a brief to complete in her own time. By approaching different industry professionals for mentorship, she was able to gain project-specific help for each of the briefs. Over 18 months of self-directed study, in addition to part time work, Woolsey completed the four briefs and exhibited the results in her own ‘degree show’ titled ‘Make Your Own Masters’, at Somerset House in London this year. She hopes the exhibition will encourage others to do the same, showing that self-directed study can be a productive alternative to elitist education systems. 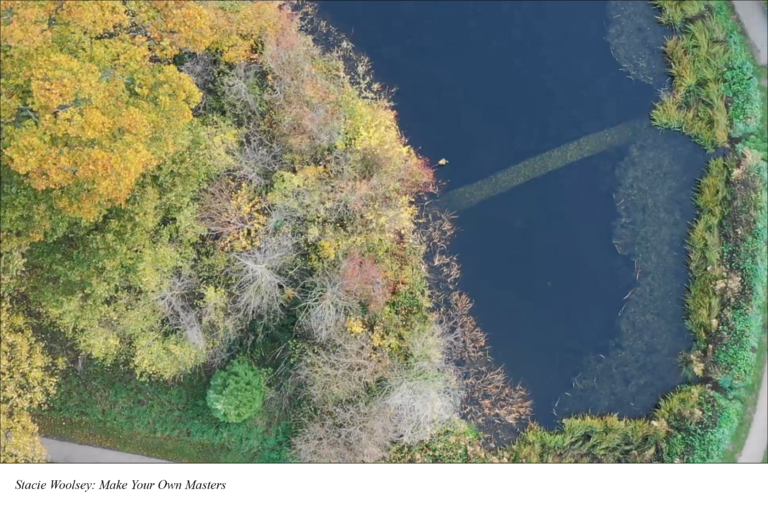 Woolsey, in partnership with Somerset House is now calling for 10 multidisciplinary creatives that have faced barriers to post-grad education to apply for the 2020 Make Your Own Masters Programme, an 18 month explorative programme taken from that of Woolsey’s experience. Applications close 30th November. If you’re interested, check our their website here.

Payinterns.nyc is an online platform that shows which creative agencies in New York are paying the living wage for interns. Anyone who wants to get a foot into the industry are encouraged to take internships, but this often proves challenging without sufficient pay in cities as expensive as NYC. The simple initiative created by graphic and interaction designer Barron Webster, relies on data gathered from the companies themselves, or from previous/current employees. Recently, UK designer Gabriel Keogh used the open-source code to create a London version; payinterns.london. The open-source code is of vital importance to Barron: poorly-paid internships is not a problem confined to one city. This way, sites for any city can be easily replicated and engineered – brining fair pay to creative interns worldwide. 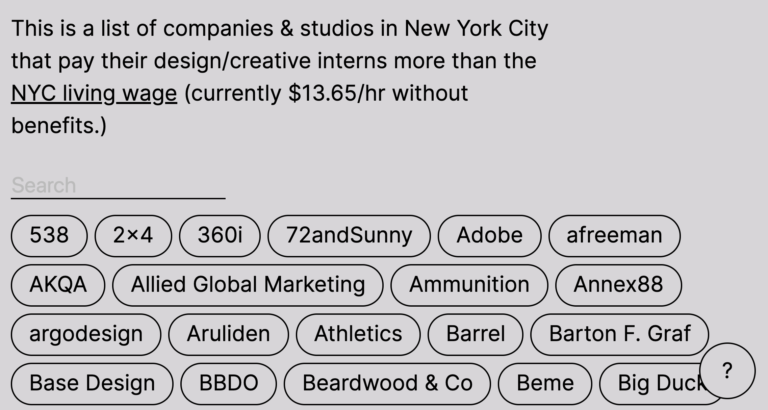 In addition to such support platforms and resources as these, the question of ethics and sustainability has become a highly charged subject amongst the larger art and design world. For example, the Louvre’s recent removal of the Sackler family name, following anti-opioid demonstrations led by photographer Nan Goldin. Prior to this, Goldin also helped influence the UK’s National Portrait Gallery in its decision to refuse a Sackler donation, which in turn, inspired other institutions including the Tate and the Guggenheim to follow suite. Thanks to public protests, the oil sponsorship of several institutions has also been removed, including the Van Gogh Museum, Tate, Southbank Centre, Field Museum Chicago, Edinburgh International Festival, and many more. 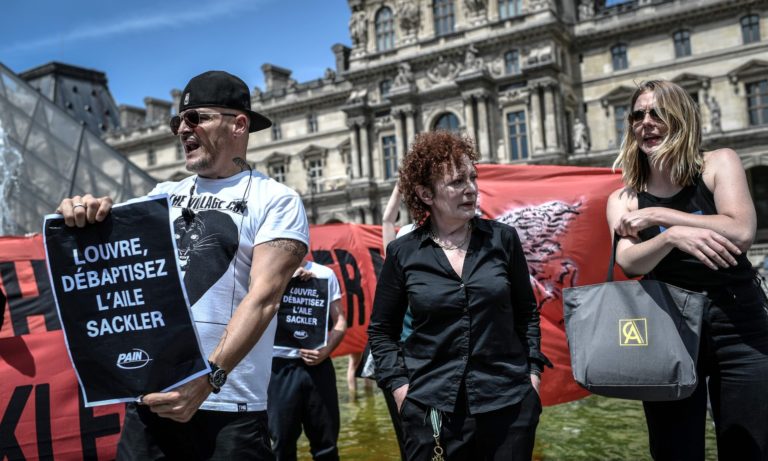 The struggle between wanting to help the world and building your career can often be tricky to navigate. Large organisations like the Louvre are accountable for their actions, and as expressed – have a responsibility to listen to their audience. However, as a young designer, freelancer or small creative organisation, how can we work in a more sustainable and ethical path, without sacrificing personal/creative development?

WDCD speaker Naresh Ramchandani of Do The Green Thing wrote a useful guide in which he explains what we, as creatives can do to tackle the climate crisis. His words – urgent, but hopeful, express the need for change across all boards of our careers. From everyday working culture, like switching to plant-based lunches, or using public transport over uber, to client choice; researching and understanding the client and their actions before choosing whether to promote or reject them. He understands that this can often be a complex choice – and may be the difference between paying an employers salary and letting someone go. He suggests then, to ask “if not now, then when?” and draw a manifesto for future policies that kickstart this change. If you, like many of us wonder “what on earth can I do?”, Ramchandani seeks to make some sense of it. Read the full guide here. 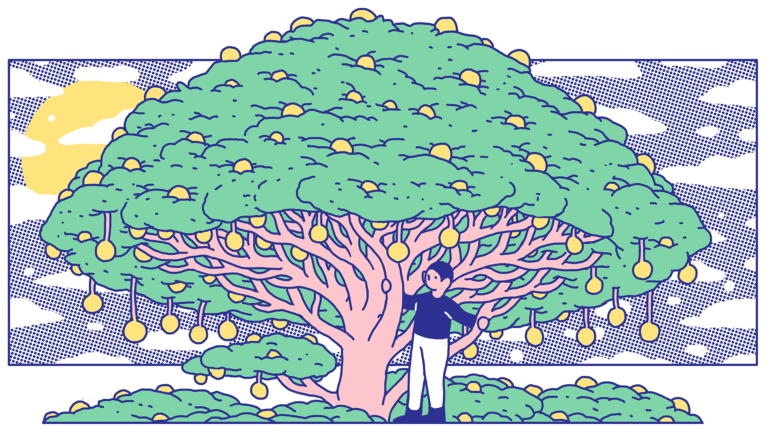 Evan Cohen for Its Nice That

Pali Palavathanan of creative agency Templo, wrote a similar article about making money and staying ethical. Is this an achievable goal, today? Palavanthanan recalls Templo’s experience in the controversial Hope to Nope Exhibition, in which they pulled their work from the show due to The Design Museum’s choice to host a dinner adjunct to a yearly meeting of the world’s largest arms dealers. Templo works on a creativity for change ethos: work shouldn’t just look good, it should do good. Palavathanan too, recognises it’s often not that simple – but encourages creatives to start anywhere, no matter how small: redacting the industry wide “but what can I do” mentality through power in numbers. She also notes the favours of a “robin hood” approach – taking profit from unethical organisations to do good, but warns this needs to be as transparent as possible, as “consumers are more socially aware than ever”. As concluded: the creative industry shouldn’t demand total purity, but can make the necessary steps to unite as part of the solution. Read the full story here. 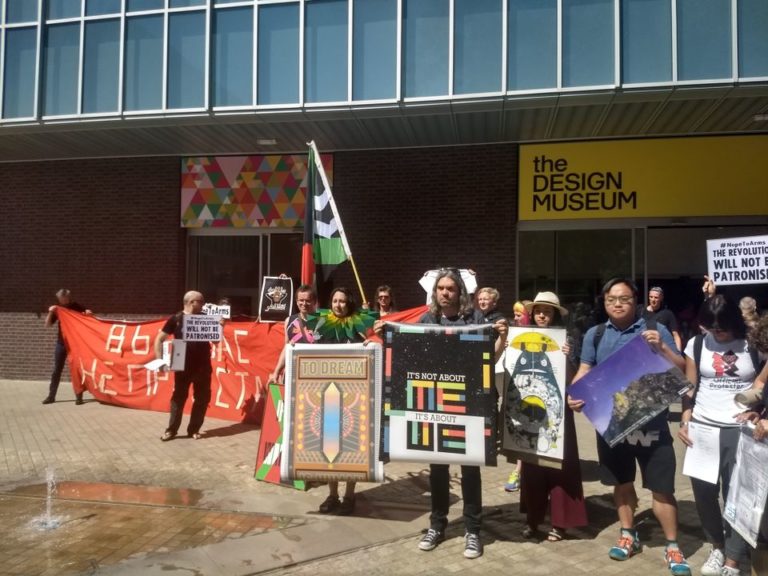 It’s acknowledged the world faces a lot of challenges. And as creatives today, we cannot simply ignore these facts. But in addition to finding future solutions, derailing major corporations and changing the world, we also need to protect and support ourselves; emotionally, physically and financially. As Palavathanan notes, change isn’t possible through just one person or organisation – rather, we need to unite our actions through a shared investment in the future. Making these small changes like Ramchandani suggests, is just the starting point. Whether you’re a student, freelance designer, or established expert in your field – we all share the responsibility to change. The doughnut model is one way we can envisage a regenerative and circular path in our practice, but this doesn’t mean it will be easy. The Doughnut economy Lab on December 6th will seek to explore this complex path in more depth – bringing together a unique group of individuals to discuss what it means today, for tomorrow.

Are you interested in circular economies and their relationship with the creative industry? Maybe you’re just starting out in the creative field, or perhaps you have expertise on the issues discussed; now’s the time to get involved with the Doughnut Economy lab! Apply to one of our limited community places today.