Are creative cities safer cities? That’s one question we hope to explore in further depth at this year’s Radical Collaboration Lab, Safer Cities. The desire to improve urban safety is shared worldwide, but to what extent does creativity play a role in this? Looking at examples of existing creative initiatives; from virtual learning environments, to traffic mimes, to the removal of advertising –- we can explore how design can help shape (or inadvertently invoke) the future of social integration, crime prevention and enhanced safety.

Currently, over half of the global population are believed to be living in an urban area or city, with the percentage set to rise close to 70% in the coming decades. Urbanisation, especially in developing countries, has been accompanied by increased levels of crime, violence, lawlessness, and societal conflict: The Global Network for Safer Cities (GNSC) reveal that sixty percent of all urban residents in developing countries have been victims of crime, with women, young people, and those living with insecure land tenure who face the most acute risks. Although stronger juristical measures have evolved over time, the need for preventative measures are still necessary to tackle this issue head-on.

So how can creativity play a role, and what can we learn from existing projects in order to strengthen future initiatives? Here are some examples of organisations and creatives taking new directions in urban safety.

As the GNSC points out, violence against women and children unfortunately remains a huge issue worldwide. In this case, there are many examples of organisations using creative approaches in an attempt to increase safety and raise awareness. A recent experiment by Free a Girl and DDB Unlimited, fights against child prostitution using face-swap technology to confront the Dutch public with a stark reality that hits home. The screen, which first presents a young girl in a brothel in India, replaces her face with those of young female passers-by, out on a normal day with their mothers, grandparents, sisters etc. Paired with the words ‘Fight child prostitution as if she was your own’, the provocative installation hopes to inspire everyone in the Netherlands to stand up and support the cause, either through donations or going to see the movie ‘Sold’.

In a similar vein, WDCD’s 2018 No Minor Thing Challenge sought to combat the sexual exploitation of children in the Netherlands. After learning children from other countries residing in The Netherlands are 14 times more likely to be victims of sexual abuse, one project by Nonstopcollective, created a game to try and safeguard such children. Compass uses virtual technology to guide children through the rules of society in an efficient and playful way, equipping them with knowledge of the culture and how to defend themselves. On reflection, the collective expressed their surprise at the large taboo surrounding the subject, therefore outlining the importance of spreading awareness: ‘Complex social issues as sexuality, respect and power are not really talked about and are misunderstood. In that sense there is a lot of improvement possible for families and schools.’ 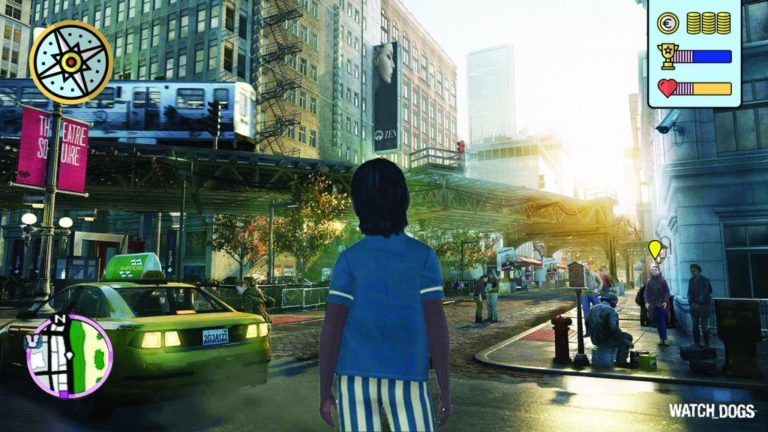 Still from the Compass game

In Brazil, an interactive map by Think Olga, also uses technology to combat sexual violence. The Chega De Fiu Fiu map (which translates to ‘No More Catcalling’) provides locations and in-depth accounts of each attack. It is designed to show women where attacks are more prominent, but also gives survivors the confidence to stand up and use their voice. 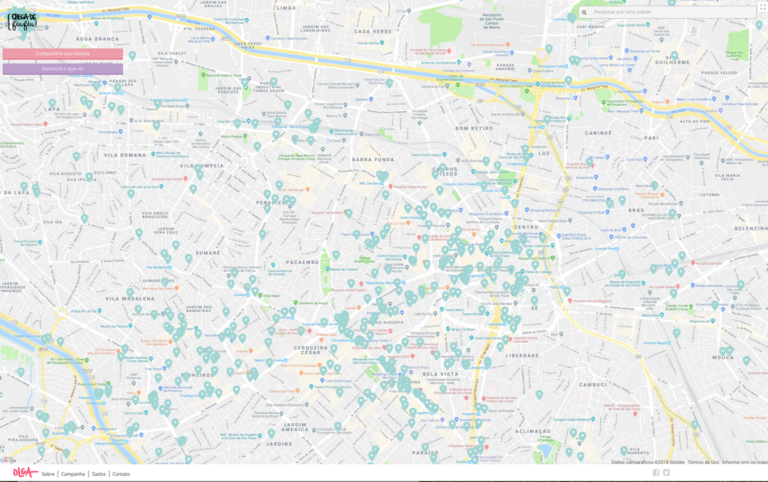 Between 1995 and 2003 in the Columbian city of Bogatá, Major Anatas Mockus took an extremely  nontraditional approach to urban safety initiatives. Famously, one took the form of mime. This often overlooked creative expression was used to replace famously corrupt traffic police, in an attempt to reduce the city’s sky-high traffic crimes and fatalities by humouring or humiliating them. The mimes spread across the city, mocking lawbreakers, dramatising the frustration of citizens, and inviting courtesy through praise of good driving and behaviour. The result of this experiment was a 50% drop in fatalities, reduced gridlock, and a general cultural shift in the city’s traffic. 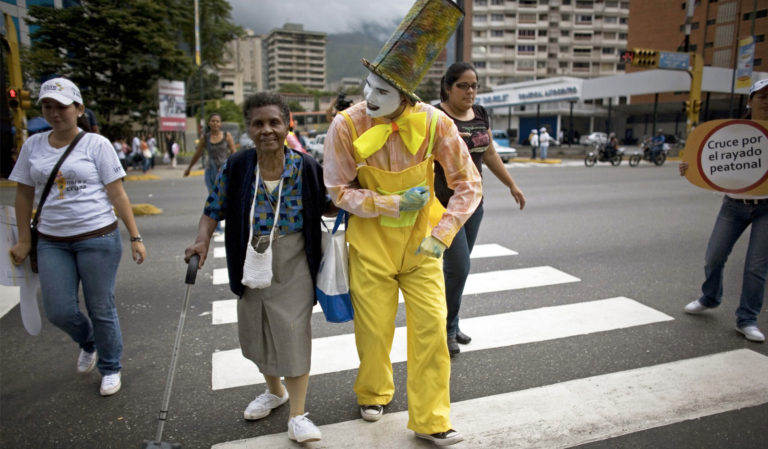 Other, more artful approaches to designing urban safety, can be viewed through cities like Sao paulo and Grenoble, who both enforced a ban on public advertising. The connection between advertising and crime may not be obvious at first, but, if seen through the perspective of the 2011 London riots, in which £100 million worth of damage was sustained through looting (stealing), the link between the bombardment of consumer advertising and crime could be argued. In addition, the removal of the ads in Sao Paulo revealed many issues that needed to be addressed, including poor living conditions of refugees living in the factories they worked in. Cleaning the adverts provided more space for artists to work with, encouraging the spread of creativity and positive imagery within the city. 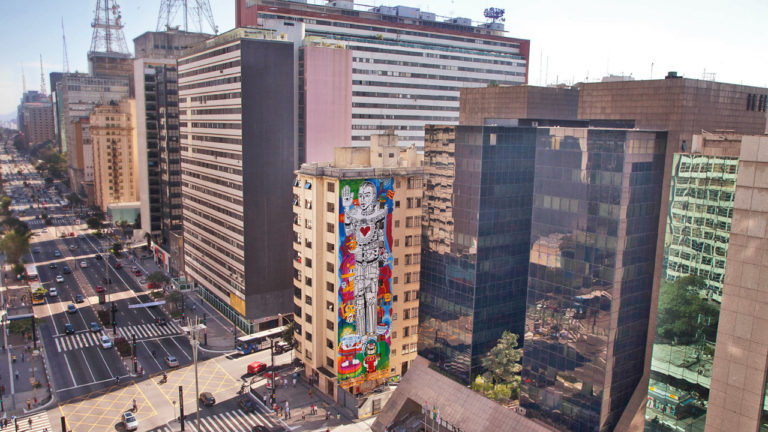 THINKING OUTSIDE THE BOX

There are examples of course, in which ‘creative’ approaches aren’t so successful. The recent #knifefree chicken box campaign in London, aimed at reducing the high levels of knife crime in London, was deemed extremely embarrassing and ‘borderline racist’ by critics. The home office distributed 321,000 chicken boxes to local outlets with printed motivational stories of young people who’d chosen to pursue positive experiences over owning a knife. The campaign was seen as wildly missing the mark, and in response, members of the public wrote responses back to the home office on the boxes, including practical solutions to knife crime. This, inadvertently, did invoke change, but not quite in the way it was intended. Through its unacceptance, the public worked together on suggesting alternative solutions, connecting the evidently detached policymakers to the people living the reality. 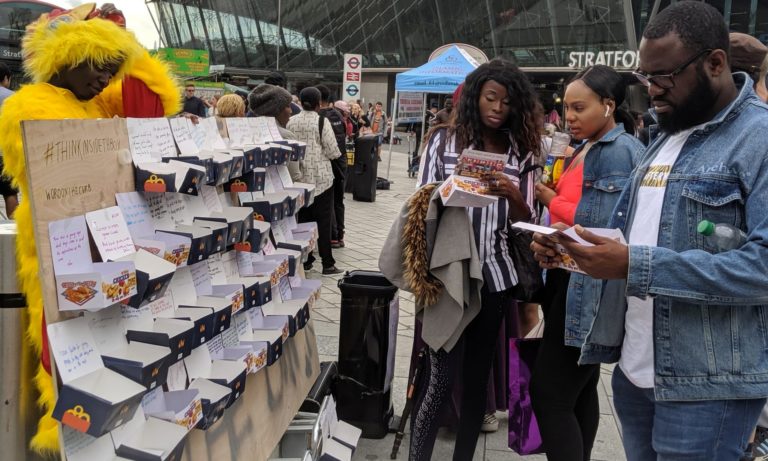 Whether it’s through digital innovations such as those of Free a Girl and nonstopcollective in the Netherlands, integrating play and empowerment in Bogota, or accidentally invoking collective action through tone-deaf campaigns in London, we can understand that creativity does indeed play a role in urban safety. As we work towards Radical Collaboration labs, we’ll keep exploring whether creative cities truly are safer cities. Stay tuned for updates from the workshop, where creatives, experts, policymakers and stakeholders will work together to explore this issue directly, with the aim to start the planning for setting up urban living labs in two pilot cities: Durban and Nairobi.