Stories from Latin American creatives, from Mexico to the world

Just before the news of the pandemic José de la O, industrial designer and founder of delaO Studio, and Miguel Melgarejo, innovation strategist, brought back Fuera de Contexto (Out of Context, in English), an old podcast project that returned with more strength, after a lot of us are sheltered at home as a result of the quarantine and social distancing policies. Fuera de Contexto is a podcast produced and created by José and Miguel about the stories behind creative people in Latin America.

The idea of ​​making this podcast began in the Netherlands when José and Miguel lived and studied there. Their love for podcasts, doing new things, and highlighting the work of Spanish-speaking creatives led them to an inevitable conclusion: let’s join forces, brains, contacts, and skills to generate a podcast aimed at the Latin American creative community. Both believed it was a good opportunity to demystify and take out of context several circumstances and events: hence the name of the podcast, Fuera de Contexto.

A week ago, Alain Pescador, Director General of WDCD Mexico, interviewed Jose and Miguel to hear more about the rebirth of Fuera de Contexto, podcasts in times of the Coronavirus and their thoughts on the future of design in Mexico. 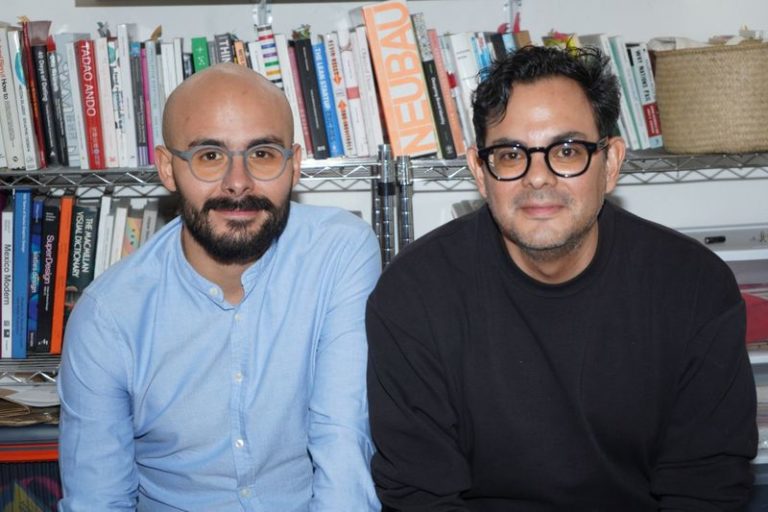 Alain: Where are you in this contingency and what plans do you have for Fuera de Contexto in these complicated times?

José: At home. I haven’t been out in over a month and I’m really enjoying it, as we keep uploading new episodes of Fuera de Contexto. Just a few days ago we released an episode with Gabriel Lopez from Sonido Gallo Negro, an incredible designed-inspired cumbia band.

Miguel: At my parents’ house. I came to Monterrey to quarantine, and the truth is that

I’m also enjoying it quite a bit.  And we believe that Fuera de Contexto has a responsibility to play in the current situation, which is that of sharing relevant and quality content. And so we work on the podcast with more energy and enthusiasm than before.

Alain: Public discussion and debate is important for a healthy democracy, and Fuera de Contexto adds to this effort. How do you consider that Fuera de Contexto adds to the public discussion about the role of design plays in our society? What topics do you consider are the most important to discuss in a context where design in Mexico is just beginning to gain value as a discipline for business, but also as a tool for social and environmental change?

José: I don’t know if that is the role of Fuera de Contexto. Maybe it was at the beginning but I think what we focus on the most is in understanding and highlighting the creative process of people who we admire. We love to hear more about what their transformation process looks like and how they use creativity to solve problems.

Miguel: I have always believed that design is an important tool, but personally I do not agree with the perspective that the design is necessarily at all times useful or good in society. It is a tool and like any tool can be good or bad, everything depends on people’s intentions – design does not equal positive change. So I think it is very relevant to know the stories behind creative people, that contribute much more to discourse and to understand how we can better articulate ourselves as a society.

Alain: What future do you foresee for design in Mexico at a time when large strategic design agencies are opening offices in the country (Fjord, frog design, McKinsey Design, to name a few)?

José: Well, that speaks to the demand for creative consulting.

Miguel: There’s no doubt that this is good. It contributes and adds to the credibility of creative/design consulting. That said, I don’t think this is a reflection of a different reality in Mexico, since most of the consulting firms that you mention are acquisitions of companies that existed previously. This is simply a recognition of the efforts and level generated for design in Mexico – this has to be celebrated. As these big consulting firms continue to work in Mexico, they will experience adjustments, since talent is limited, the market is tight and fintechs are taking over the market, with greater purchasing power to recruit potential talents.

Alain: It seems that the world of strategic design is becoming, or has already become, the new essential consulting service for large companies. Do you think this trend, focused on human-centered design consulting, is it here to stay? OR Is it simply a new trend that will cease to be relevant in the future?

José: I think it is important to note that, as long as there are products and services and people who consume, companies will need other people to give them new points of view on how to improve. And what better than designers to meet this goal.

Miguel: It is a trend that I think is reaching its peak, will plateau for a while and then start losing steam. It is an essential service, but if it is analyzed in detail it has also been diversified a lot, what is known as “strategic design” is being pulverized in many other things. I am more of the idea than human-centered design, which is an old practice, has contributed enough and it is time to renew this practice and create something new, something more relevant.

Alain: You could say that “managerialism” in the business world has been exacerbated by the growth of the business consulting industry, where large companies make important decisions based on the recommendations of a small group of people who have a biased business training. In my opinion, this is not entirely positive and I think “managerialism” has not done much for the development of humanistic and social processes in the business field. Do you think that strategic design consulting is moving in the same managerial direction?

José: I think this question is more about the quality and ethics of the people who offer a creative consulting service. In my experience as a consultant working with Spotify, for example, I was surprised by the horizontality and commitment with which they make decisions that ultimately influence millions of people (always returning to using data that comes from its users, for the benefit of them). Similarly when I worked with WDCD on the What Design Can Do Challenges, the
decisions we made always pointed to evidence from those involved to all levels of the development of the Challenge.

Miguel: I personally think that managerialism is based on satisfying the wishes of
people and, most importantly, businesses. For this, a lot of stunts are performed, “gurus” are hired and studies are bought, all to tell the story that businesses want to hear. I think that this objective is fundamentally wrong, it is what has led us to generate a culture focused on generating addictive applications and systems that have positioned us where we are. I believe it is time for new leadership that is not seeking to justify their work through studies and advice from others but to work on a process that takes on a deep responsibility to promote a better society. 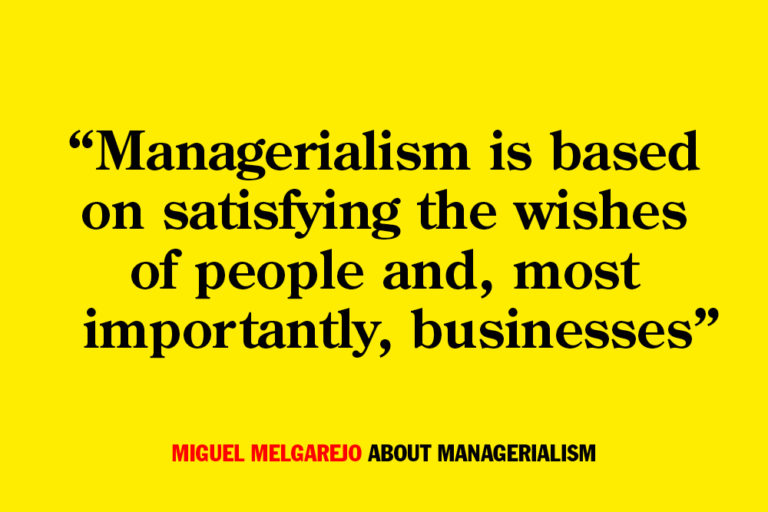 Alain: What do you think is the most important differentiator between strategic design consulting and traditional business consulting?

Miguel: Suits vs sneakers … Usually, traditional business consultants base their success model on solving problems with formulas that have worked in the past. They end up filling templates without much analysis, justifying their work on previous business cases.

On the other hand, I think design consulting isn’t quite there yet, it is definitely getting closer to achieving its objective, but I still think that there is more creativity that can be put in place and much more to explore to strengthen the outcome of strategic design consulting.
José: There are many types of business consulting. From accounting, financial advisers,
administrative, etc. Sometimes they are intertwined with creative consulting and sometimes not. At the end, they always have an end goal that is to benefit their users and consumers.

Alain: I would like to get back to Fuera de Contexto and the digital space it covers today. What do you think is the future of podcasts (a technology that we saw die in its beginnings and then resuscitate in a surprising way)? What other alternatives (digital spaces of dialogue) do you think will gain importance in the future?

Miguel: I think podcasts are and will be a niche medium, as they are the most modern and replicable means we have to tell stories as we did in past times, that is, without visual elements, using only a voice and a conversation. The importance of content in podcasts is not represented by likes, amounts, and virality. The relevance of its content is defined by the ability of the podcast to touch people in a significant way. From this perspective, I think podcasts have been important, are important, and will be important.

José: The growth of podcasts in Mexico was something that motivated us to return again with Fuera de Contexto. When we started Fuera de Contexto a few years ago, it was a more landscape since there were not so many streaming services and it was difficult for people to listen to us. Now it is much easier.

Alain: What is the most important contribution that Fuera de Contexto has in this time of COVID-19?

José: Give the company to our listeners. For example, Andrea, a collaborator of delaO design studio wrote an article for our platform “Desde Casa” on how hearing voices can give you the feeling of not being alone and I think this describes the contribution of Fuera de Contexto.

Miguel: Meeting someone you didn’t know before with the same feeling of intimacy and depth that you would feel if you were sitting with her/him in your living room. The contribution is a human feeling and connection.

Alain: In this time of COVID-19 we have seen that digital platforms have grown in reach and in a certain way they have become indispensable from various perspectives. Do you think that digital spaces will continue to grow in importance/relevance? Or do you think that, after the pandemic, the physical spaces, and the physical interaction between people will return with much more strength, displacing the space that digital initiatives are now covering?

Miguel: I think we will be hungrier for sincere human connections, either physical or digital. Anxiety and fear has only one solution, real and sincere connections between people. 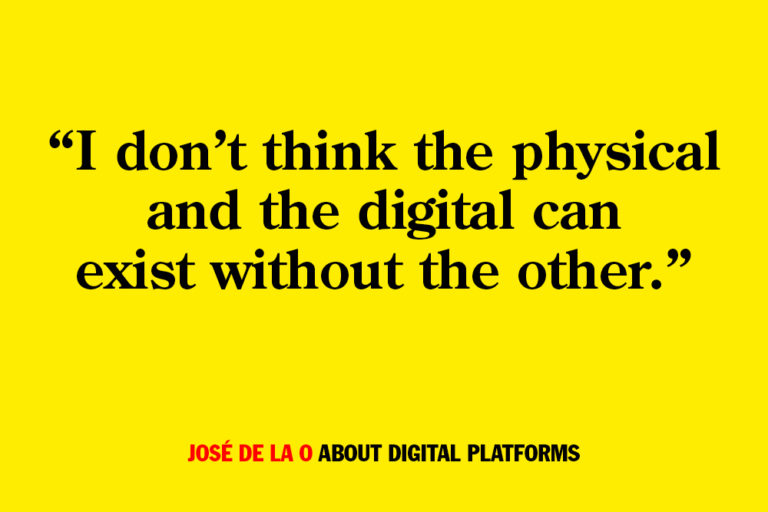 Alain: Finally, for the Fuera de Contexto audience, what can be expected in the next weeks and months?

Miguel: That José and I continue having fun doing what we do, and sharing content in the best way we can with whoever wants to join us.

José de la O: Trained as an industrial designer and with a Master in Conceptual Design at Design Academy Eindhoven, José is the creative force behind delaO Design Studio. The studio focuses on
epistemological design, which studies the role of design in society and visualizes the future possibilities of how technology could affect society. José is a full-time professor at the Department of Industrial Design at the Tecnológico de Monterrey University.

Miguel Melgarejo: innovation strategist trained at TU Delft, has participated in projects such as the Reinvent the Toilet Challenge from the Bill & Melinda Gates Foundation, Cirklo and Cocolab. Miguel is part of the founding team of TOCTOC, directed the documentary Design The New Business, among other things. Miguel focuses his work on developing initiatives, projects, and experiences that are relevant and transcendental for people. He has collaborated on projects for companies such as Facebook, FEMSA, Gentera, MABE, UNICEF, Sura, CIE, among others.