The Rise Of The SidewalkPhysical spaces for interaction, exchange and expression – designing the 1.5 meter society

Now, in times of social distance and various forms of lockdowns around the world, the good old sidewalk takes on new functions as communication platforms. A physical space for interaction, exchange, and expression. Could stories portraying different ways of using such spaces spark inspiration for designing the 1.5 meters society?

Sidewalk Stories every day at 17:00

Sidewalks are not spaces we usually give a lot of attention to. They are functional, mondain, necessary – they are simply there. Sidewalks are definitely not ‘the place to be’ nor are they leisure hotspots. At least not until a couple of weeks ago.

With the restriction to stay home or in some countries very close to home, the importance of that little-bit-of-outside-space nearby our dwelling increases. An opportunity arises to create new functions of public/semi-public spaces we can still use while keeping to the safety guidelines.

In Utrecht, a Dutch lady took the opportunity when she decided to turn her sidewalk into a storytelling theatre. The retired professional storyteller, Ankie Hoyera, has been performing outside her house every day for the past few weeks. Just before 5 o’clock every afternoon, she takes out a few little stools and places them 1.5 meters from each other. Some minutes later, facing her enchanted audience, she tells a story accompanied by only her body gestures and sounds. Since Ankie started telling stories, the audience grew. The neighborhood kids now bring out their chairs every afternoon, joining Ankie on their shared sidewalk.

The sidewalk is your canvas, use it

Sidewalks are also used by inhabitants of cities all around the world as canvases for sharing messages with one another. Sparked by the #ChalkYourWalk on social media, many sidewalks have been covered with drawings and messages of support and solidarity. In New York, children who can no longer play together leave messages for each other on the sidewalk next to their house.

This is particularly interesting when thinking of the age of social media and digital communication. With almost any communication device we own, one could type a message and share it with the rest of the world in about a minute. So what brings people to spend hours drawing their message on the sidewalk for the neighborhood to see?

One answer could be –  it’s not one or the other.

The intertwine and the constant dialogue between the analog world and the digital world is probably one of the most unique characteristics of this period. 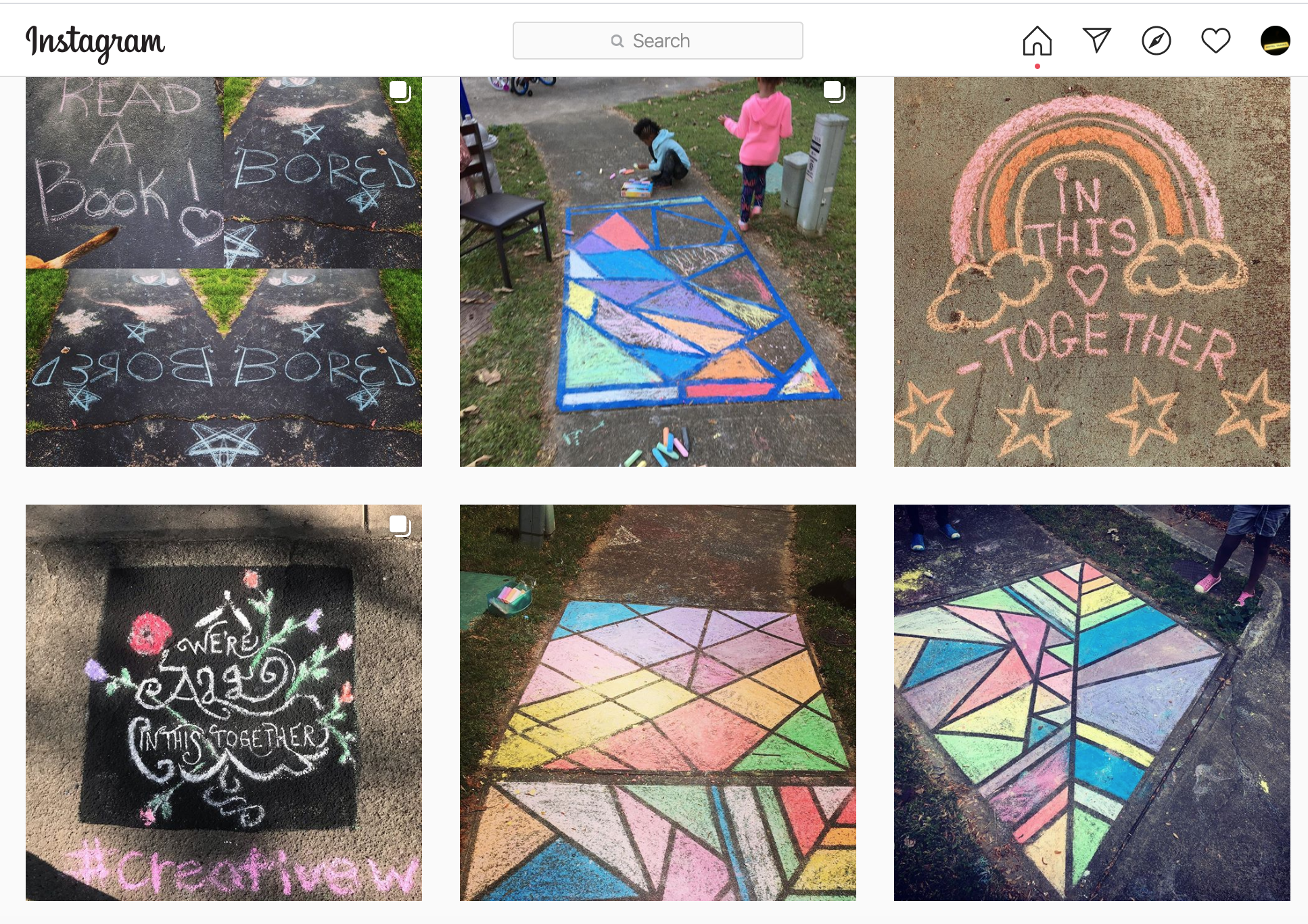 Not only the sidewalk is gaining functionally and popularity these days. The windows, another space separating the private and the public domain, is now being used for communication and interaction.

Over the past weeks, the typically unblinded Dutch house windows have been covered with messages to the public. Many people, mostly children, hang decorated shirts, drawings and letters expressing support and solidarity with the care sector and other groups.

While these expressions are all examples of one-sided communication, windows also offer the opportunity for conversation. What became known as window-talking is the phenomena of people visiting their relatives, mostly elderly, and calling each other while standing on the other side of the window. It is not an alternative for a hug, but for some, it’s the best they can do right now.

A woman in Leeds reached out to her neighbors by using her window as a communication tool. She hung a sign against her window with the question: ‘what is the black + white cat called?’.

Starting to think about the 1.5m society

One of the aspects that binds these stories together is the spirit, energy, and creativity that comes with the notion of crisis. Just like in a design process,  it is usually the limitations that open up new possibilities. These stories inspire us to rethink how we interact with one another in the 21st-century society, in a pre- and post-corona world. It raises questions about the importance of the physical, tangible communication experience next to the digital one. As designers, let’s use the current limitations and turn them into an opportunity. Can a space like the sidewalk become a platform for education or an extension of the theatre? Could windows of cultural institutions become the new main stage?

These simple stories can inspire us to design experiences in the physical realm, connected with the digital realm, in a world possibly going towards a ‘1.5 economy’.

By Shay Raviv, social designer and design researcher. In times of lockdown, Shay draws inspiration from stories around us that us to think about design challenges and opportunities.