As social issues go, sex trafficking is as complex and insidious as they come. The crime is often silenced by cultural taboos and hidden behind closed doors. So what can we do to break them open? Launching this month is a brand new platform which could at least make the hospitality industry a safer place for those at risk. No Place for Sex Trafficking is a certification program designed by What The Studio, an Amsterdam-based creative agency founded by Sara Landeira and Ekhiñe Domínguez.

The idea for the project first took shape during the What Design Can Do No Minor Thing Challenge in 2018, in which a dozen design teams were invited to collaborate on innovative solutions to help end the sexual exploitation of minors. Fast forward to today, and No Place for Sex Trafficking has been developed into a fully-fleshed-out platform which offers hospitality services both the incentive and the tools needed to become empowered and responsible allies. When a company joins the program, all of its employees are given an online training course in which they learn how to spot the signs of sex trafficking at their workplaces. The company will be awarded the No Room for Sex Trafficking certificate when 60% of its staff have completed the course. 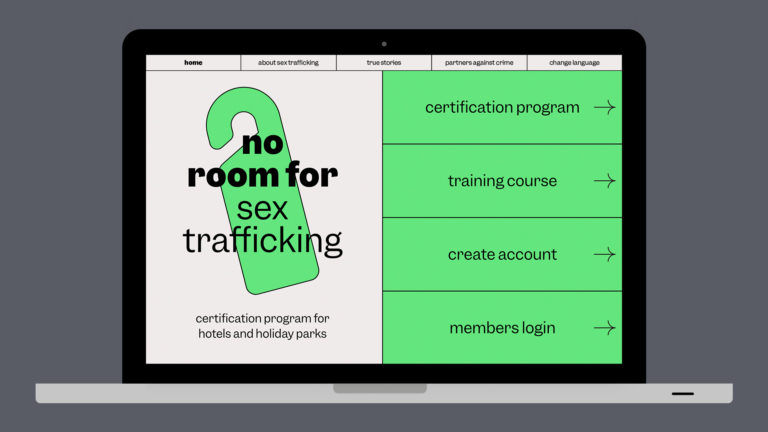 To learn more about the people and the process behind the program, we lobbed a few questions over into Sara and Ekhiñe’s mailbox.

Firstly, congratulations on the launch of the program! How are you feelING?

Thanks, we feel relieved! After such a long process, we are very happy that No Place for Sex Trafficking has finally seen the light, and to see how more and more hotels are signing up to enrol in the certification program. We are also curious to know how it will be received by the hospitality industry, and what the public opinion will be. 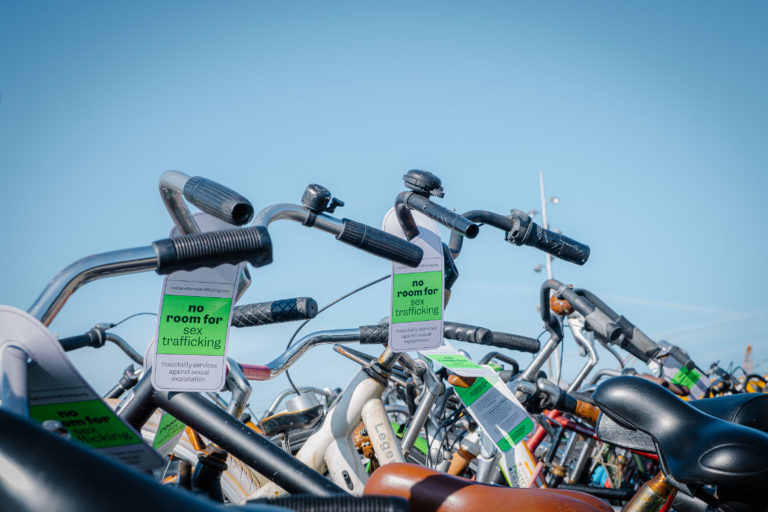 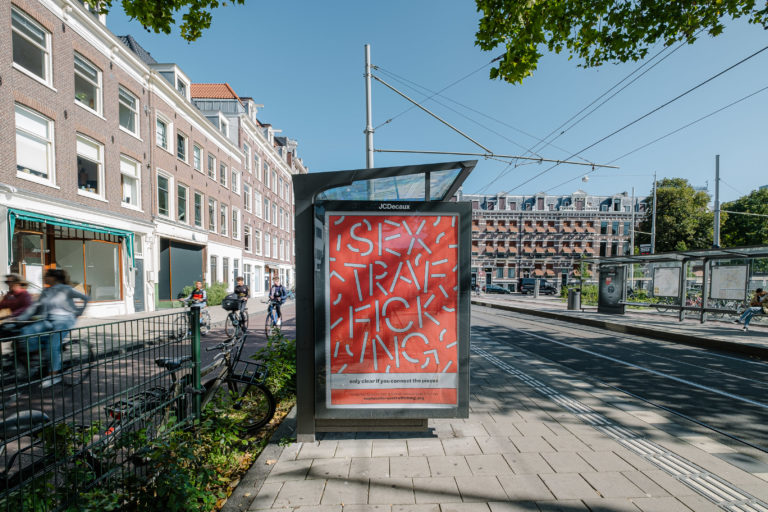 Print campaign announcing the launch of the program.

Can you tell us a little bit more about where the initial idea came from?

During What Design Can Do’s No Minor Thing Challenge we were provided with a broad range of research materials and were connected with experts from the Dutch Public Prosecutor’s Office (OM) and the Ministry of Justice & Security. We learned that the hospitality industry currently plays an important role when it comes to facilitating or preventing sexual exploitation; and that most initiatives trying to do something about it have been lacking in impact and scale.

We decided to create a certificate which awards hotels and holiday parks for taking steps to actively combat sexual exploitation. Next to educating employees about prevention methods, the certificate is something that hotels can communicate about. This will bring visibility to the problem, and function as an ongoing awareness campaign for the general public. You can compare it to a TripAdvisor or Booking.com certificate, but then on a social responsibility matter.

The point was also to introduce a strategy and communication approach through which a large amount of people can be trained, and to make it easy and attractive for companies to engage.

How has the project changed or developed since then? What are some considerations that guided your design decisions?

There were two aspects that we were very clear on from the beginning. First, in order to create impact and draw attention, we should stay away from the visual language that is commonly associated with campaigns from NGOs on social issues, because people don’t react to that anymore, unless they are already sensitive to these kinds of topics. Secondly, as designers we are not experts on sexual exploitation, and therefore if we want to create a service that is actually useful, we need to collaborate with other parties that know more than us.

The OM suggested that we take a broader perspective and target the hospitality industry at large.

Overall, we can say that the project has been executed as we originally envisioned it, in large part thanks to the sponsorship from the Ministry of Justice. Our partners also helped us further shape the project in a concrete direction. For example, initially we only planned to target hotels and holiday parks. The reason was that there is more information on how sexual exploitation happens there than in other hospitality branches. Then the OM suggested that we take a broader perspective and target the hospitality industry at large. So, we included bars, restaurants and taxi drivers in the program.

Regarding the visual identity of the project, our design process evolved from drafts that looked quite corporate, to the final visual identity, which is quite far from the branding styles which are commonly used in hospitality, education and social/humanitarian issues. The visual identity we have created has a sense of urgency and lightness that works better to surprise and motivate people to join the initiative. 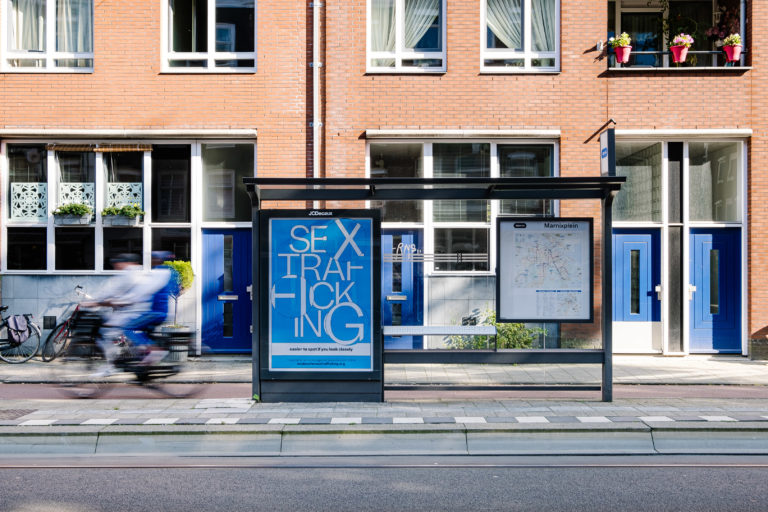 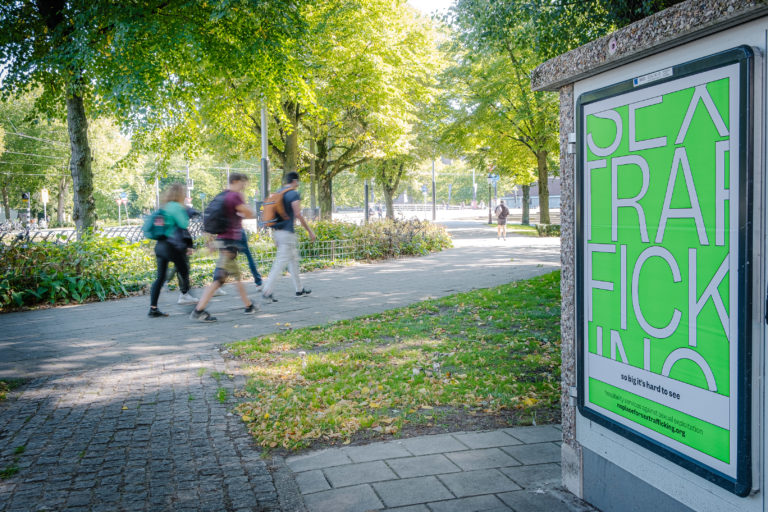 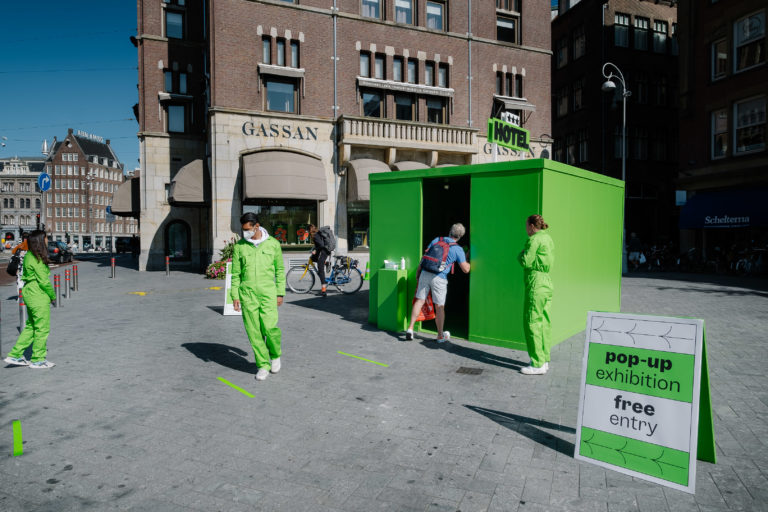 Pop-up exhibition announcing the launch of the program.

As a designer, what drives you to engage with social projects like these?

Compared to other types of projects, designing for social causes has the incentive that your work is applied to something that the world actually needs. It is also great to create a project from scratch, where the subject is there but the way in which it should be tackled is up to us. Normally clients already have a project that is quite predefined, and they call a designer to make it look nice. In this case, we have been asked to create the complete project itself, which is much more interesting and challenging for us.

The chance to prove to organisations such as the OM, the Ministry of Justice and Security or the police how useful it can be to team up with designers is also quite motivating, because it ‘educates’ other sectors on the potential benefits of collaborating with creatives. Hopefully this will happen more and more in the future.

Lastly, is there anything you learnt in the process that you want to pass on to other creatives?

Unfortunately for designers, we have to accept that the boring part of the process is just as important as the creative one. We invested a lot of time in making a proper project plan and budget, before we started designing. Unexpected issues will come up anyway, but that saved us some headaches and made the whole process much smoother.

Partnerships are also important; for instance, the OM has been very supportive and having them on board also helps to get more people interested. Finally, and needless to say, you need to team up with people who are as motivated as you about the project, who have no hidden interests and who are willing to give their best.

No Place for Sex Trafficking is a project by What The Studio, developed with the support of Defence for Children, the Dutch Ministry of Justice and Security, the Public Prosecution Service (OM) and What Design Can Do. Campaign photography by Thijs de Lange. Images courtesy of What The Studio.