In Indian society, repair is a dying skillNo Waste Challenge in Delhi: On frugality, sharing and craftsmanship

Indian homes weren’t equipped with a dustbin for the longest time — some still aren’t. Most traditional households utilised everything, unfamiliar with the concept of waste. Even choosing to call it ‘waste’ brings in a bias, viewing it as a problem to solve, rather than a resource. In that sense, frugality has always been a part of Indian tradition. Crafting and repair skills have also been an essential component of this culture. How is this changing in modern times?

In the past, the prohibitive costs of certain products and amenities meant that Indian families would often pool funds and share resources within the community. For example, families would buy one set of large utensils to share and simply borrow whenever one is hosting a gathering. This has been true even for appliances like mobile phones, TVs, water pumps, tractors and many others. People would take great care of the material things they owned, fixing and repurposing them whenever necessary. As little as twenty years ago, every Indian household had a repair toolbox. Meanwhile, a network of cobblers, tailors, and mechanics formed the backbone of a robust repair economy.

Today, mindsets are changing. Cheap commodities are just a click away on numerous e-commerce portals. New objects are more attractive than repaired ones. Brand manufacturers make products that bank on a fast-fashion culture with a declining sense of durability and value for money. In this throwaway era, hands-on repair skills are increasingly considered a vocation for the uneducated, and repair culture in Indian cities is steadily declining. 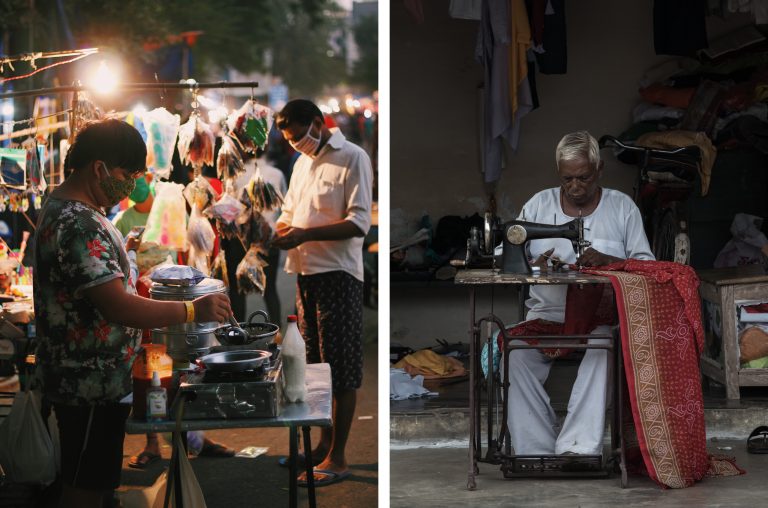 The mounds of waste keep growing

With local challenges such as shifting consumption patterns, limited awareness, and the lack of collective will, India faces some complex problems when it comes to waste.

Prakash Javadekar (MEFCC) has stated that “India will, in another couple of decades, generate nearly thrice the waste it currently does–165 million tonnes by 2030 and 450 million tonnes by 2050.” Delhi alone produces around 10,000 tonnes of garbage every day. A huge portion of this waste is being dumped in three overflowing landfill sites – Bhalswa, Okhla and Ghazipur — which exceeded their maximum capacities over a decade ago. Today, Delhi is one of six major cities partnering with What Design Can Do on the worldwide No Waste Challenge. In this open call, we’re especially interested in solutions that are grounded in a deep understanding of the local context. So, where are the opportunities for design to make a difference in Delhi?

Shifting consumption patterns: There is a booming use-and-throw mentality amongst the city’s growing middle class. E-commerce is also exacerbating the desire to continuously and mindlessly consume, with demand for imported products contributing to a depleting Indian crafts sector. The opportunity is to rekindle our relationship with objects and design products and systems that are made to last, or made to be repaired.

Limited awareness: The issue of waste has generally been addressed through a “mopping approach” i.e. collection and disposal of waste. After waste is generated, it is typically transported away from our lives without much thought — it is out of sight, out of mind. There is also a lack of education and few people are aware of the true consequences of waste. Hence, it is difficult to understand the problem at hand, its effects on human life and ecology. To help tackle this problem, one can think about investing in education as a way to promote sustainable living.

Adoption of Western viewpoints to solve India’s complex local waste problem: Western approaches on sustainability largely do not fit the local context. Rather, we need to be open to learning from existing and historic practices that fit our local resources, climate and culture. We need to instil pride in local traditions and systems that innately build on sustainable practices if we want to go beyond superficial short-term fixes.

Repair Café Bengaluru
Adapting from the model that originated in Amsterdam, Repair Café Bengaluru is a space for repairers, volunteers and enthusiasts to come together and bond over the craft of repair. The café is open to both traditional repairers from Bengaluru’s repair markets as well as hobbyists who are passionate about taking stuff apart and putting it back together. Around it, a community has formed, which strongly believes that instead of discarding or upgrading to a better model, one can try their hands at giving things a new lease of life. This could in turn help reduce consumerism. This is a good way to start connecting to the traditional networks that embody the ‘repair, reuse, recycle’ philosophy, from kabadiwalas, seamstresses, to local bike repairmen and more. 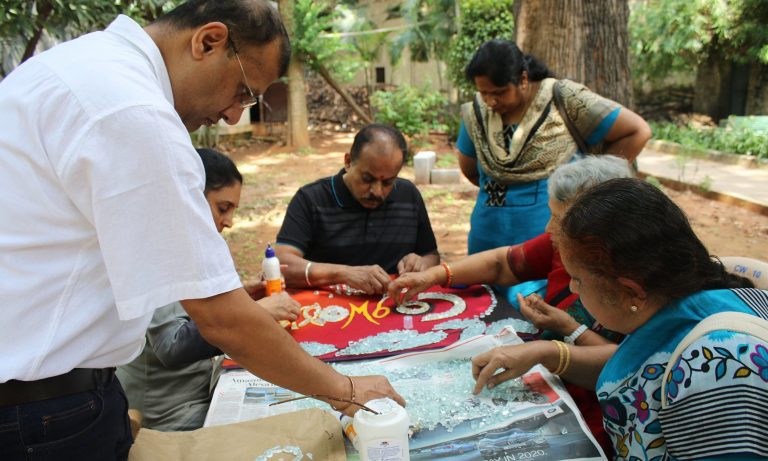 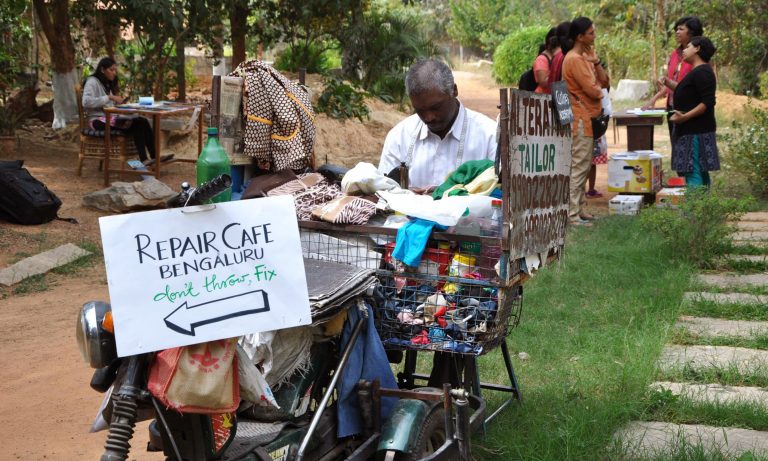 “In Indian society, repair is a virtue lost with the advent of consumerism. It is a dying skill and in this urban bias, repairers are marginalized. We felt it’s time that we rewind our cultural ethos.” — Purna Sarkar (Founder, Repair Café)

Differniture
There are also creatives working to promote traditional forms of production in India. With her furniture brand Differniture, designer Aakriti Kumar connects century-old Indian wood-working crafts with reclaimed wood. The wood that is used for her furniture is imperfect, sometimes studded with holes and marked with age. Most of the pieces come from old floorboards salvaged from dismantled container crates. By celebrating ancient techniques, Differniture mounts a challenge to the fast-furniture industry, while helping to sustain the livelihoods of highly-skilled local artisans, craftsmen, polishers and carpenters. 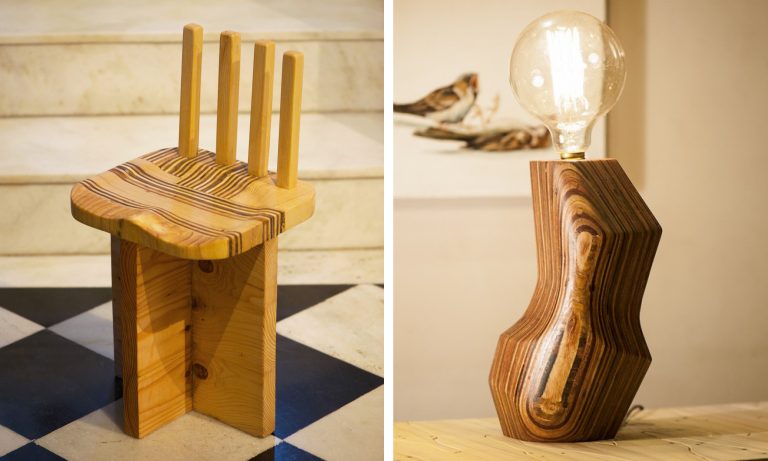 Going back to our roots

Looking back at our culture and traditions, there is so much that we can learn from in terms of values, ingredients and practices. Yet, we regard sustainability as a new-found, future-facing concept. Through the No Waste Challenge we hope to find some ideas to the question: How might design use local vocabularies and frames of reference when defining sustainability?

Ultimately, to tackle the pressing issue of waste in India, we need to consume, produce and dispose of products more mindfully. If we can open the doors to support local materials and lifestyles and eventually increase the demand for them, it can lead to the creation of a more circular economy.

For more inspiring stories like this, follow the No Waste Challenge, a global competition presented by What Design Can Do and the IKEA Foundation. Innovators from around the world are invited to submit creative solutions to reduce waste and rethink our entire production and consumption cycle. In Delhi, the No Waste Challenge is working closely with partners Unbox and Quicksand to offer an extended track inspired by local problems and opportunities. Applications are open until 20 April 2021.