Every empty street is a crowd against the virusArtists use stencils and chalk to share positive, publicly useful messages about social isolation on the streets of São Paulo.

Artists use stencils and chalk to share positive, publicly useful messages about social isolation on the streets of São Paulo.
By Manaira Abreu

Days before the Easter holiday, when he realized that in 2020 friends and family would not get together to exchange the traditional chocolate eggs, graphic designer Victor Ghiraldini had an idea when standing on the balcony of his apartment. He imagined painting phrases of motivation and empathy on the streets to be seen from above and serve as a warning to the population.

‘Despite the recommendations of the health authorities, social distance is being questioned,’ Victor realized. ‘I felt that the movement in the streets had increased and perhaps the perception of the severity of the virus had been lost – how dangerous it can be.’

A city full of love

Quickly a group was formed, including Marcelo Nogueira, creative director of advertising agency AlmapBBDO, who took charge of writing the sentences, as well as photographers, video makers and an extensive list of enthusiastic professionals.

Victor, who is used to graphic production challenges in his professional life, developed matrices in vinyl canvas 15 meters long by 2 meters high that would serve as a stencil. The painting is done with water-based paint, which fades away in a few months without damaging squares and streets. 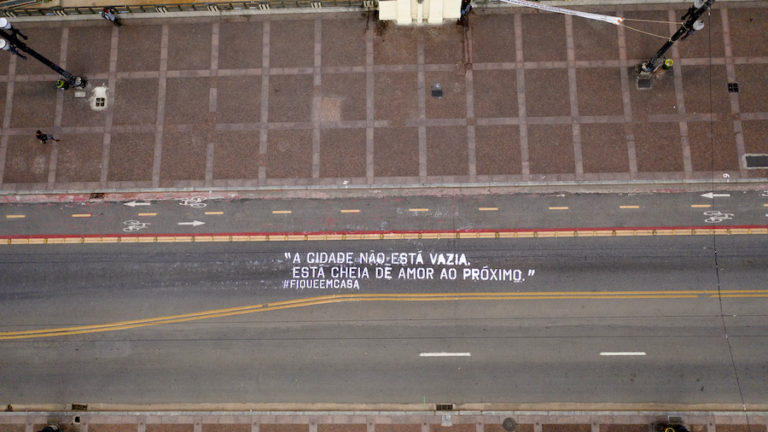 ‘The city is not empty. It’s full of love for the other’ (photo Bruno Sandini)

‘The city is not empty. It’s full of love for the other’ was a first message, painted on the asphalt in front of the Consolação Cemetery in the central region of São Paulo. The message was afterwards replicated on many more points in the city.

‘In this difficult time, everyone helps as they can. By staying at home, through a donation or, as we did, using communication to convey positive messages to the public. The idea is to occupy the streets with words, while they can’t be occupied by people,’ Marcelo Nogueira said to Vogue Brasil.

Arrested for damage to public assets

During the first intervention (on Easter Sunday), the group was approached by the Metropolitan Civil Guard and taken to a police station. Despite the initial allegation of damage to public assets, the intentions of the initiative were soon recognized by the social nature of the messages and, two days later, they were already authorized by the City Hall to continue the project. 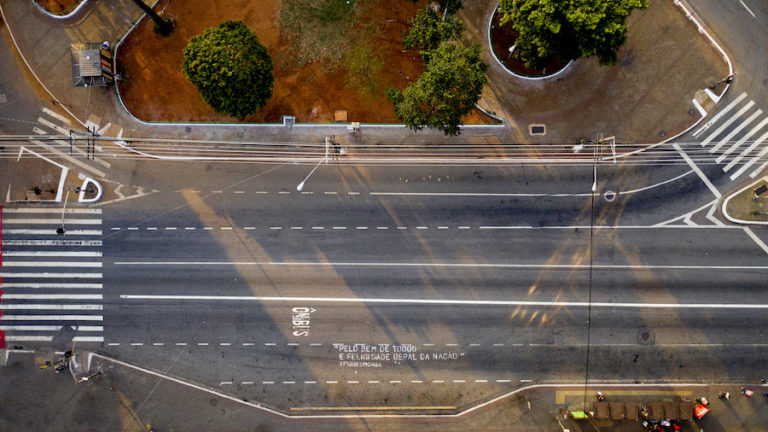 So, with no further impediment, the group got organized and one night the following week painted three different sentences on no less than 18 spots in the city. Later the Minhocão turn and Nove de Julho Ave were added, were people living in the nearby buildings could read these messages: ‘Each empty street is a crowd against the virus’ and ‘For everyone’s sake and the nation’s general happiness: stay home.’

The group now is planning to advance to the outskirts of the city, with phrases adapted to the realities of the communities living there, while also considering expanding the action with the distribution of basic food baskets. Let’s keep an eye out!