Over the last few weeks, we’ve seen revolutionary protests erupt in cities across the United States. In New York, the peak has also been punctuated by a visual change, as retailers, restaurants and luxury brands boarded up their windows in an effort to protect their businesses. Sheets of plywood now line the streets; mounted in anticipation, waiting to be discarded. To save them from landfill, the Plywood Protection Project has launched a citywide collaboration with artists who will transform this perfectly good wood into meaningful public art.

The non-profit behind the project, Worthless Studios, was founded in 2016 to provide space, resources, and technical assistance to aspiring artists. They began collecting discarded plywood back in August, alarmed by the skyrocketing price of the material, which had started disappearing from art supply stores in the city. As the archive grew, they put forth an open call for art proposals. They planned to donate the plywood to five winners, who would also be awarded studio space, tools, and fabrication assistance to complete their artworks, as well as a $2,000 stipend, and an extra $500 in material budget. 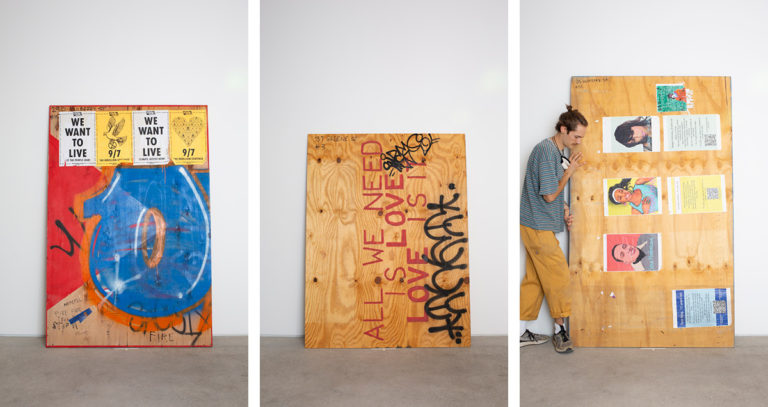 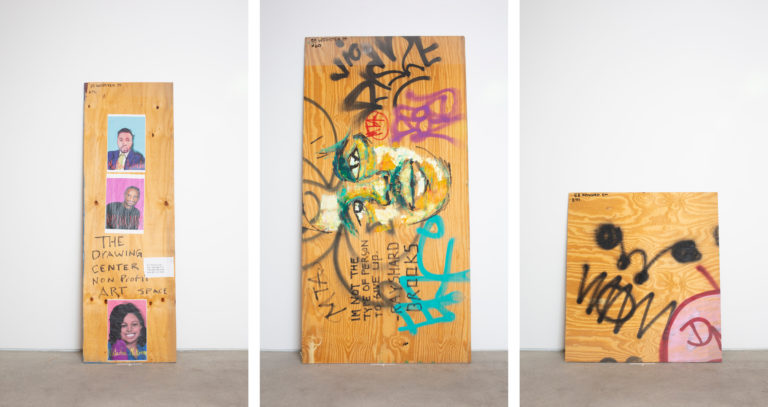 WASTE NOT, WANT NOT

The winning proposals were announced on 11 November, chosen by a jury of local figures the likes of Jean Cooney, director of Times Square Arts; and Elizabeth Masella, public art coordinator at NYC Parks. The selection includes both art objects, like Michael Zeheloski’s monument to protest, and more interactive installations, like Tony Dibernardo’s ode to theatre. Each one is fiercely political in its own way, and — rendered in discarded plywood, some adorned in graffiti — all spark valuable questions about community, responsibility and the irrefutable link between social and ecological justice.

Initiator Neil Hamamoto describes the project as “an effort to engage with our community here in New York and repurpose materials used amidst a moment of crisis.” He is also passionate about preserving the historic meaning of the medium, and hopes that the winning artworks will serve as “important reminders that the issues we’re living through don’t disappear once the physical barriers are taken down.” While the exact locations are still being determined, the plan is for one artwork to be installed in each of the city’s five boroughs, and for all to be in view by Spring / Summer 2021.

Learn more about the Plywood Protection Project, and how you can further support the work of Worthless Studios, here.

A preview of the winning proposals.