The Plastic Elephant in the RoomIs it time to retire the most widely-used piece of furniture in the world?

Is it possible to overlook a big plastic elephant in a room? In the English speaking world this idiom refers to a widely acknowledged problem that no one wishes to discuss. It makes me think of the single most recognisable design item of our times, of which a lot has been written, researched and filmed about. With a production time of less than two minutes, the cheap, durable, and stackable chair known as the Monobloc made its worldwide debut in the 1970s. Mono, because it is made of one single piece of plastic. This affordable design quickly became known and owned by consumers all around the globe, from Africa to the Americas. It is an icon of globalization, a symbol of mass production and of the democratization of every-day functionality.

As such the Monobloc is also the antihero of circular economy propagandists. Each year millions to billions of these chairs are produced around the globe. In terms of design it has long surpassed the global reach of the Thonet bent-wood chairs from the beginning of the 20th century. A hundred years later plastic has overtaken wood, but the question is still the same: how to produce low-cost, easily manufactured items in a way that is accessible to all? Several noted designers have played with the idea of designing an affordable classic, such as the Panton chair by Verner Panton or the Selene chair by Vico Magistretti. The definitive answer came with Henry Massonnet’s Fauteuil 300, the archetype of the Monobloc. 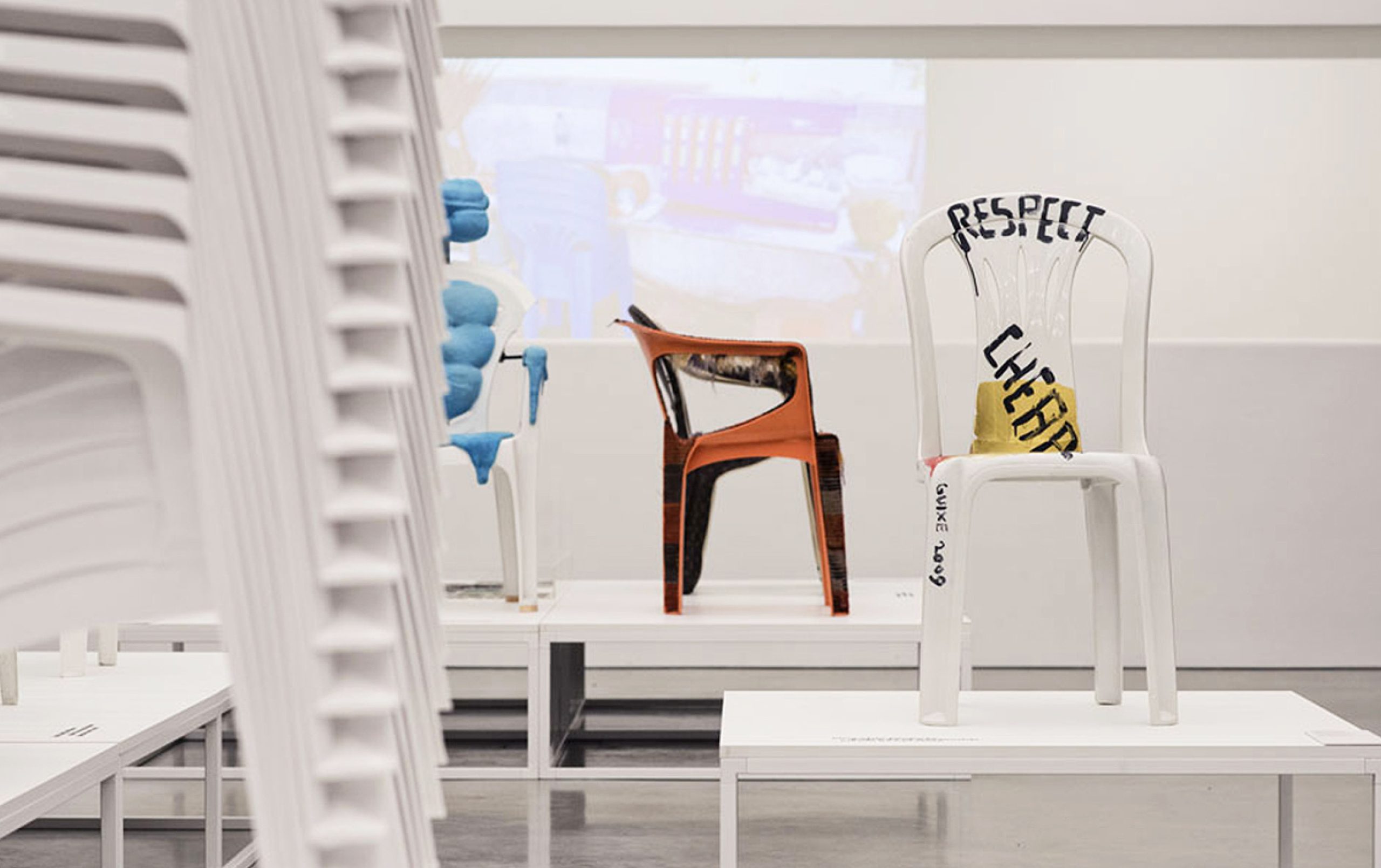 But what is it that fascinates modern-day designers and contemporary artists with this chair? Why do they choose to comment on it or incorporate it into their work? Does art, through its commentary, induce us to think about whether we should produce and consume less, or whether we should continue to sustain the unsustainable? Circular economy concepts could enter the conversation, but here the Monobloc would offer more problems than solutions. In terms of pollution and environmental impact the Monobloc is a true persona non-grata. One has to note that in some countries this item has a rather long life-span, but the truth is that it is not easily recyclable, nor does it offer a zero-waste solution to furniture-making. We as a society and as consumers should decide: is it affordability that we want to invest in, or do we dare to take a definitive step towards removing waste from our lives? 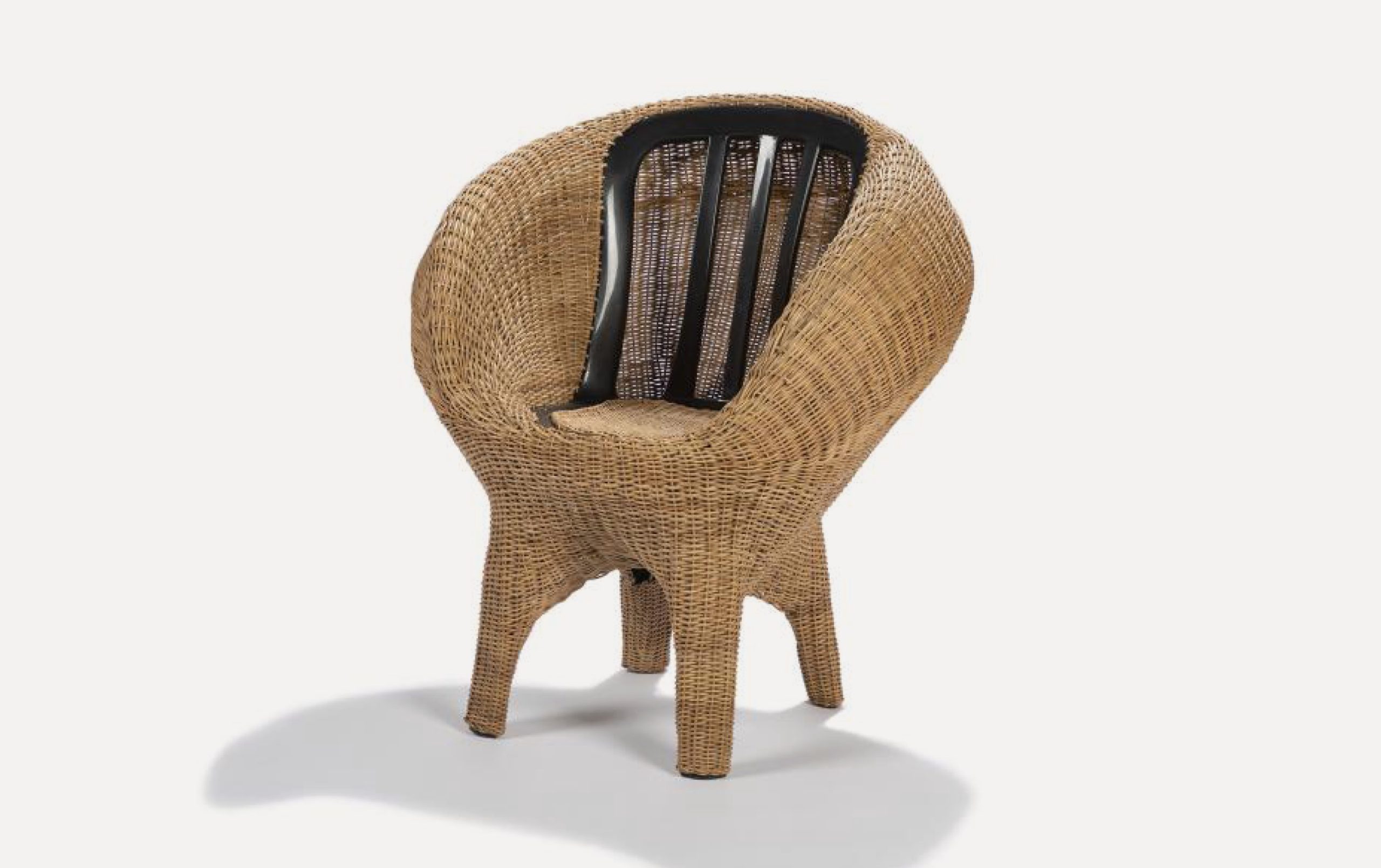 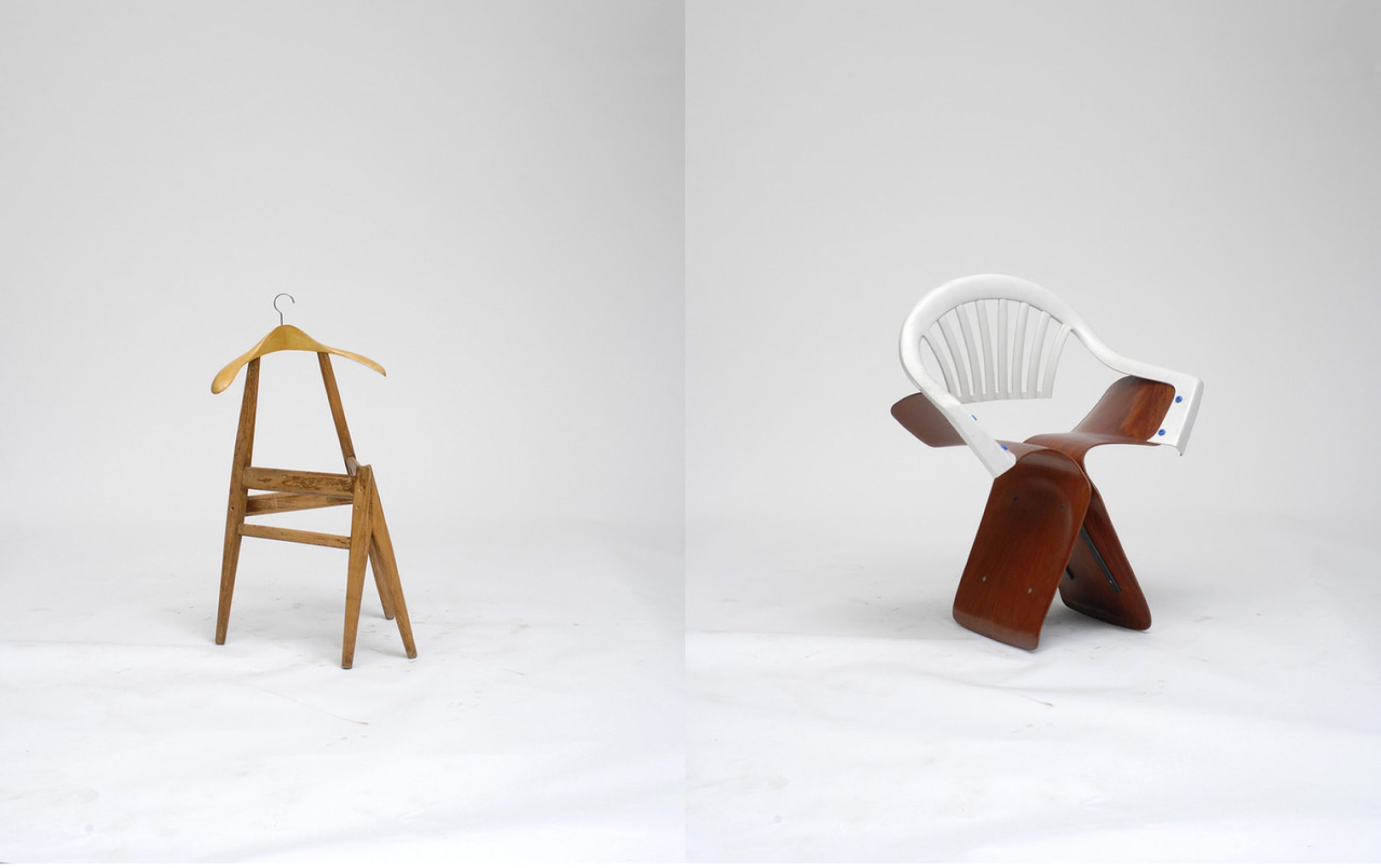 The question at hand is: shall we say goodbye to the iconic white chair, which now stands as a big plastic elephant in the living room? What changes do we need to make so that we might refrain ourselves from buying cheap, non-recyclable furniture? In 2018 the city of Basel took a radical step in this direction: it banned the use of the Monobloc chairs in public cafés and restaurants, and after their initial outrage, business owners eventually gave up. Here it comes to mind that the solution might be a collective stance coming from a public body. Because if we leave all the decision-making to the consumers, we may become just like the protagonist of Ivan Krylov’s The Inquisitive Man, who upon visiting a museum took perfect note of everything he saw, except for a rather large elephant.

Below is a conversation I had with contemporary artist Krassimir Terziev about the Monobloc, as seen from the prism of his work.

In 2022 you showed your work Hot Chairs at Structura Gallery in Sofia. The text accompanying the work says that the garden chair, known as the Monobloc, is one of “the globe’s lowest common denominators”. Can you elaborate on that?

In my solo exhibition at Structura Gallery I included a series of 6 modified garden chairs. Showing the work to an artist friend before the opening he mentioned that this type of chair is the most widely sold product in the world. It sounded interesting and made me pay more attention to the cultural context of the object which I used mainly for its plasticity and easy modification. In the article on the Monobloc in Wikipedia one can find a quote from the social theorist Ethan Zuckerman, describing the chair as having achieved a cultural global ubiquity. That’s what is behind my expression of the chair being “a global common denominator”.

As a contemporary visual artist, why did you decide to work with this design icon, if we may call it that at all?

The key work in the exhibition was a video projection with the title “A Walk in the Gallery” in which I did a reconstruction of the gallery space with the method of photogrammetry, based on a couple of hundred photos made with my phone. The reconstruction model showed a space that resembled the actual gallery space but in some kind of future state of high level of entropy — a ruin. And entropy was one of the key layers on which the entire exhibition developed. But I found that showing the effects of entropy on the projection surface was not enough, for there is still distance between the physical body of the viewer and the virtual space of the moving image. You can’t really grasp the projected image. I felt in need of placing physical objects in the space that resemble the state of decay rendered on the screen. And I wanted the objects to be pieces of furniture, part of our daily dwelling. It took me some time to find the objects that can be easily modified, sculpted really. One day I encountered an abandoned plastic chair on the street, brought it to the studio and found out that with the help of a heat gun I can alter the geometry of the chair and sculpt it in whatever way I want. The deformed chairs resembled closely the deformations on the screen and started looking like animated objects dancing in the space. 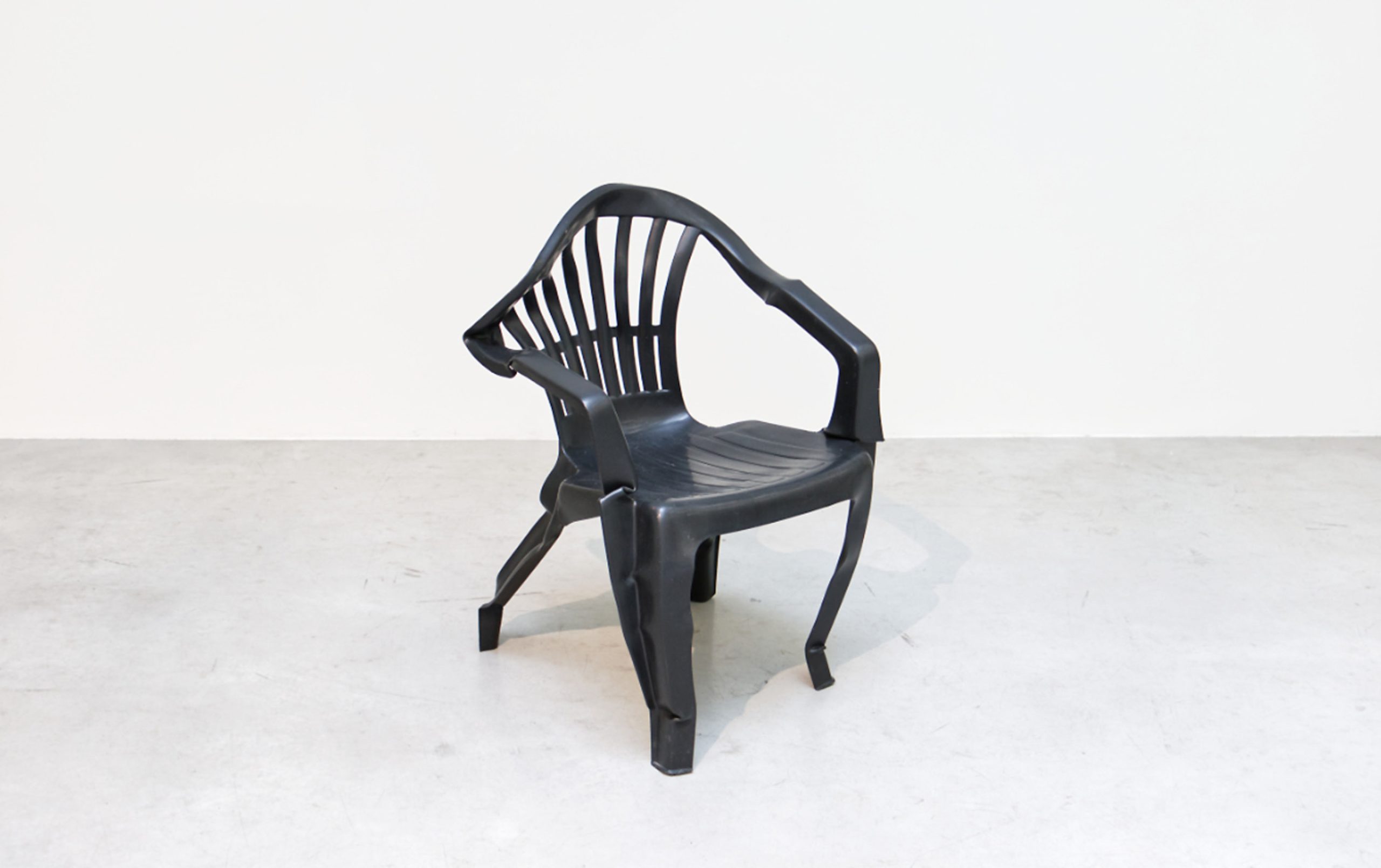 What does the Monobloc symbolize to you?

If I may use in a free style Milan Kundera’s book title: “The unbearable lightness of being”, it is a genius achievement of creativity and engineering following the vector of modernity: to make products faster, better, cheaper and in bigger quantities. But having achieved that, we find ourselves reaching the limits of that vector of development: we inhabit a thin layer of a small planet that can not sustain the speed of production of objects that have relatively short life-span, but do not decompose after their end of life the way natural products decompose. Instead they pile up in the seventh continent with catastrophic consequences.

Art offers a commentary on our ways of living, what in your opinion should we change as consumers today?

We should unlearn living in excess of our desires. We should learn to give away everything we do not really need. We should relearn to live with all the rest of humans and non-humans in mutual understanding and respect. It seems to me, it is no longer a question of choice and lifestyles, it is a precondition for our own survival as species.

Where do contemporary visual arts and functional art meet?

In the art of living. It is actually often hard to make a distinction. Sometimes the difference is only in the methods of production. There is so much art nowadays that is mere decoration, and on the contrary — there are so many great design projects that are more socially engaged than the art aspirations.

This interview has been condensed for length and clarity.

Teodora Kotseva is an art manager, curator and writer working in the fields of contemporary art, design, time-based video art, film and cultural entrepreneurship. Her work can be found in art galleries, fairs and curated exhibitions in Milan, Rotterdam, Berlin and Sofia. Her texts have been published by ArtSlant, now archived by the New York Art Resources Consortium, ADORNO and more. She is also the editor of: The Entity of ZOON, published by Roodkapje Gallery, Rotterdam.