Alarming news in The Guardian: more than 180 billion dollars invested by fossil fuel companies in new oil ‘cracking’ facilities will help fuel a 40% rise in plastic production in the next decade. It means that the ‘global plastic binge which is already causing widespread damage to oceans, habitats and food chains, is set to increase dramatically over the next 10 years’. As if we didn’t have enough problems yet. The article prompted us to review some of the solutions designers have come up with.

The Ocean Cleanup
The Ocean Cleanup is the story of the schoolboy Boyan Slat who thought of using the ocean currents to start cleaning the Great Pacific Garbage Patch. While everybody told him this was not possible, Slat managed to convince others while he had started studying at TU Delft. The project was awarded an INDEX Award in 2015. Now aged 22, Slat is heading an international social enterprise that after extensive trials and test plans to start cleaning the Pacific Ocean by mid 2018. Never say that something is impossible.
www.theoceancleanup.com 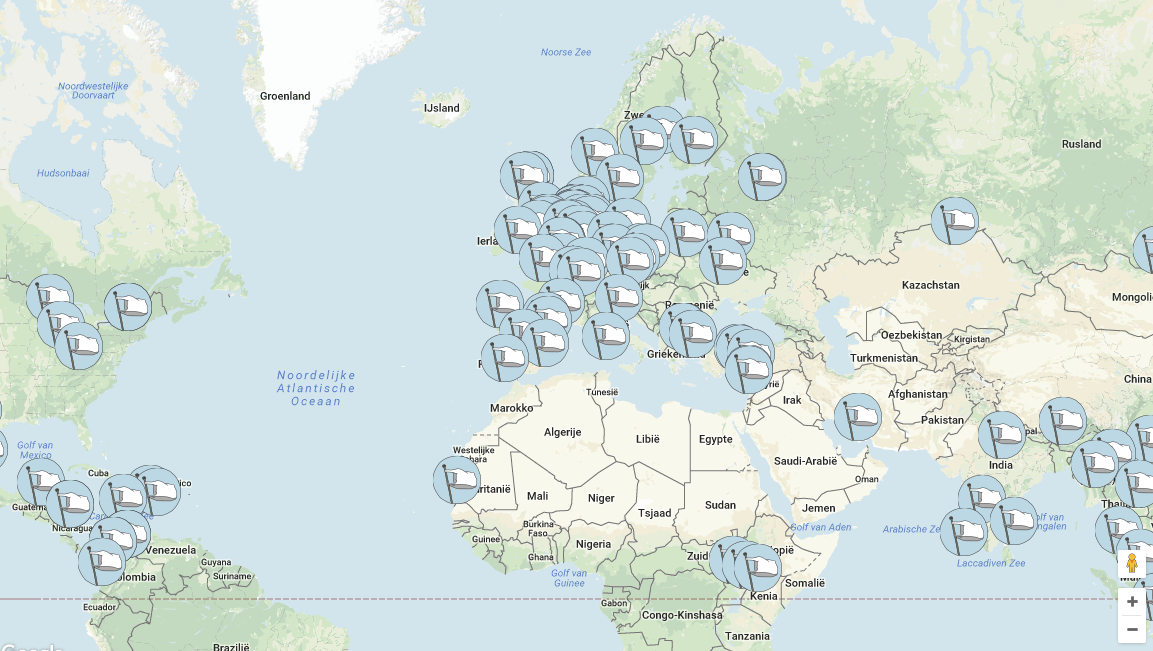 Precious Plastic
Dave Hakkens is a young designer who, confronted with the discouraging numbers related to plastic waste, devised a series of easy to make machines for plastics recycling. With lots of enthusiasm and a good deal of wit he developed an open source system that makes it easier for people anywhere to start recycling plastic. The community page on the website shows that the project now has followers on all continents. In 2017 Precious plastic version 3 was developed with a group of helpers, as you can see in this 2017 Rewind video.
preciousplastic.com

New Plastics Economy
The New Plastics Economy is an ambitious, three-year initiative to build momentum towards a circular plastics system that works. Led by the Ellen MacArthur Foundation the initiative brings together key stakeholders to rethink and redesign the future of plastics, starting with packaging. Collaborating in the project are a broad group of companies, cities, philanthropists, policymakers, academics, students, NGOs, and citizens.
newplasticseconomy.org 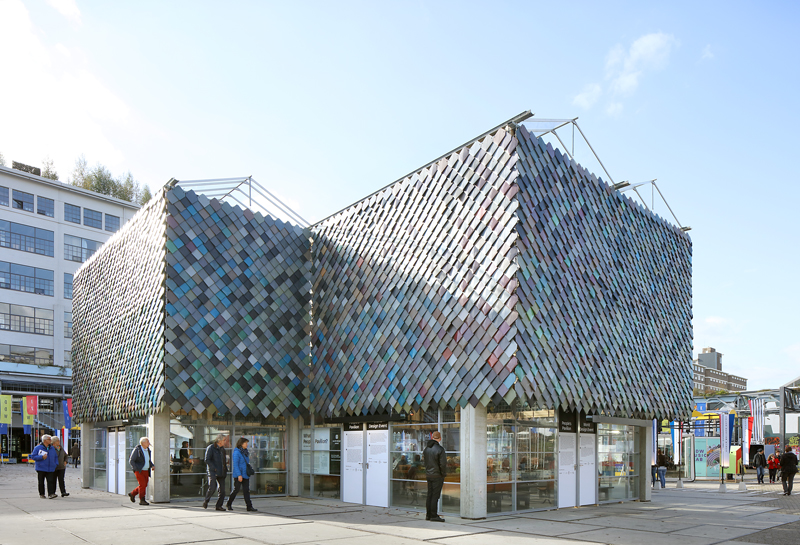 Pretty Plastic Plant
And if you start recycling then you’d better make something beautiful and useful out of it, spatial designers Reinder Bakker and Hester van Dijk of Overtreders W thought. Together with Bureau SLA they invented the Pretty Plastic Plant, aimed at upcycling used plastics instead of downcycling it to inferior products. Such as the hexagonal tiles in different shades the use of which was demonstrated in the temporary People’s Pavilion built for the Dutch Design Week 2017.
Pretty Plastic Plant 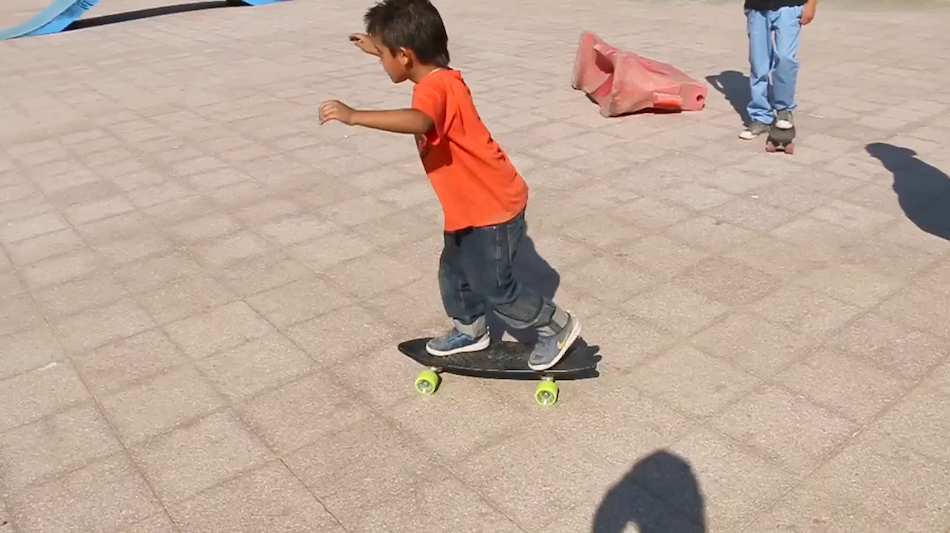 Fishing nets
Several initiatives are aimed at re-use of discarded fishing nets recovered from the sea. A Californian company, Bureo, turns them into fish shaped skateboards. And the flooring multinational Interface uses old fishing nets fished from the waters around the Philippines to produce carpet tiles. The Net Effect collection helps clean the sea, boosts the earnings of Philippine fishermen, and gives us floor coverings with a story.

Next Wave
Bureo and Interface are among the founding companies of Next Wave set up to intercept ocean-bound plastics from waterways to be used for recycling. Other major companies endorsing Next Wave are Dell, General Motors and HermanMiller. The consortium initially starts collecting waste plastics in Indonesia, one of five Asian countries that produces half of the 8 million metric tons of the plastic that flows into the ocean each year.
www.nextwaveplastics.org 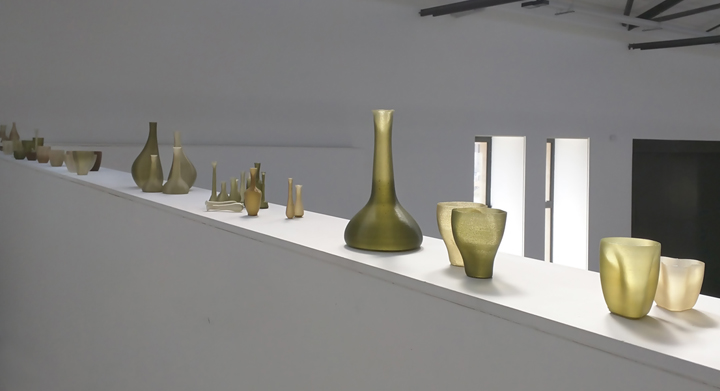 Algae bioplastics
Dutch designers Eric Klarenbeek and Maartje Dros experiment with bioplastic made from algae that can be used to 3D print all kinds of objects. On invitation of LUMA Foundation in Arles in the South of France they established an Algae Lab to research the potential of algae as an alternative for non-biodegradable plastics. To demonstrate the possibilities, they reproduced historical glassware from the collection of the Musee Departemental in Arles with the algae plastic.
ericklarenbeek.com 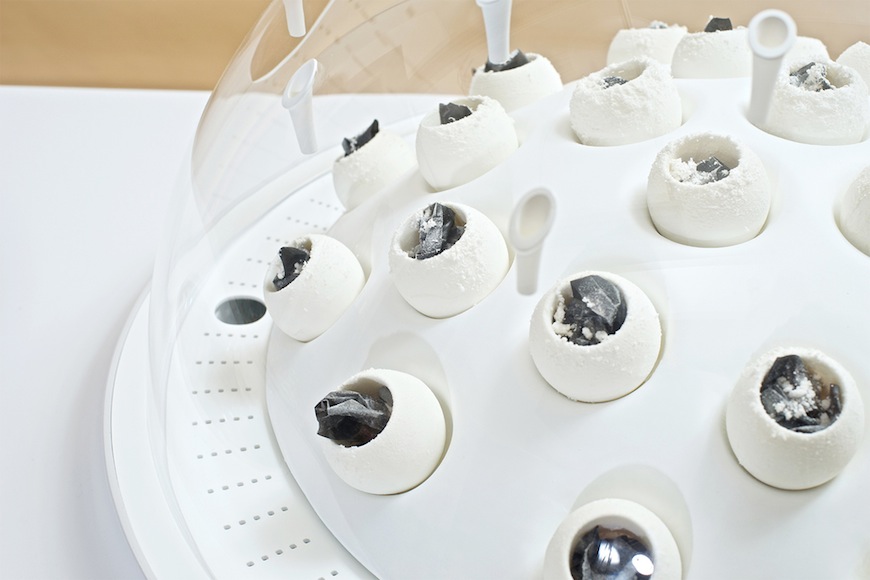 Fungi Mutuarium
Edible mushrooms that digest and grow on plastic waste, that is the essence of Fungi Mutarium. The project of 2015 is a collaboration between Austrian designers Katharina Unger and Julia Kaisinger (Livin Studio) and University Utrecht. In a prototype bowls made of agar are filled with plastic waste and a solution of fungal spores. In a few weeks the plastic is gone, while the agar bowl, called FU, is overgrown with edible mycelium.
www.livinstudio.com

Ethical filament
With the rise of 3D printing, several companies aim to make sure that the filament used for 3D printers is made from recycled plastic instead of virgin material. Amsterdam-based ReFlow developed an open source system for filament production that presents waste collectors in developing countries with a high value alternative that can increase earning potential by twenty times.
reflowfilament.com 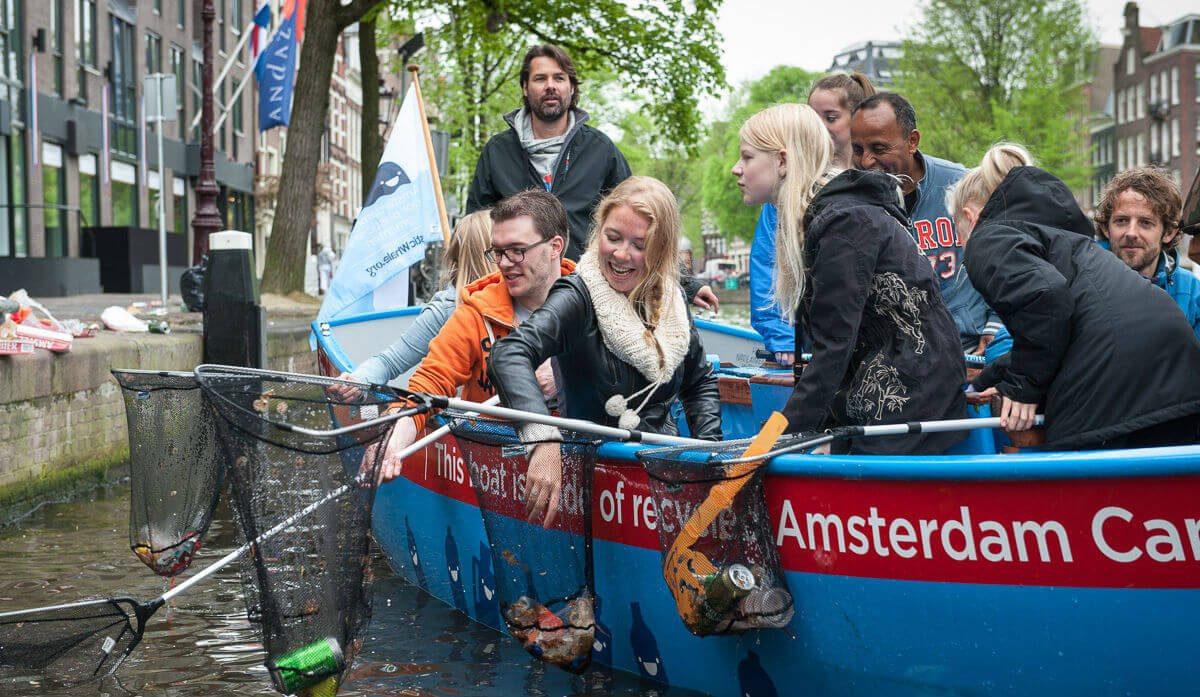 Plastic Whale
Plastic Whale is the first professional plastic fishing company in the world. Founded in 2011 by marketing professional Marius Smit, Plastic Whale has developed into a social enterprise that aims to make the world’s waters plastic-free and create value from plastic waste. PET bottles fished from the Amsterdam canals have been recycled into already ten boats that are used for sponsored waste fishing trips for companies in the waters of Amsterdam and Rotterdam.
plasticwhale.com 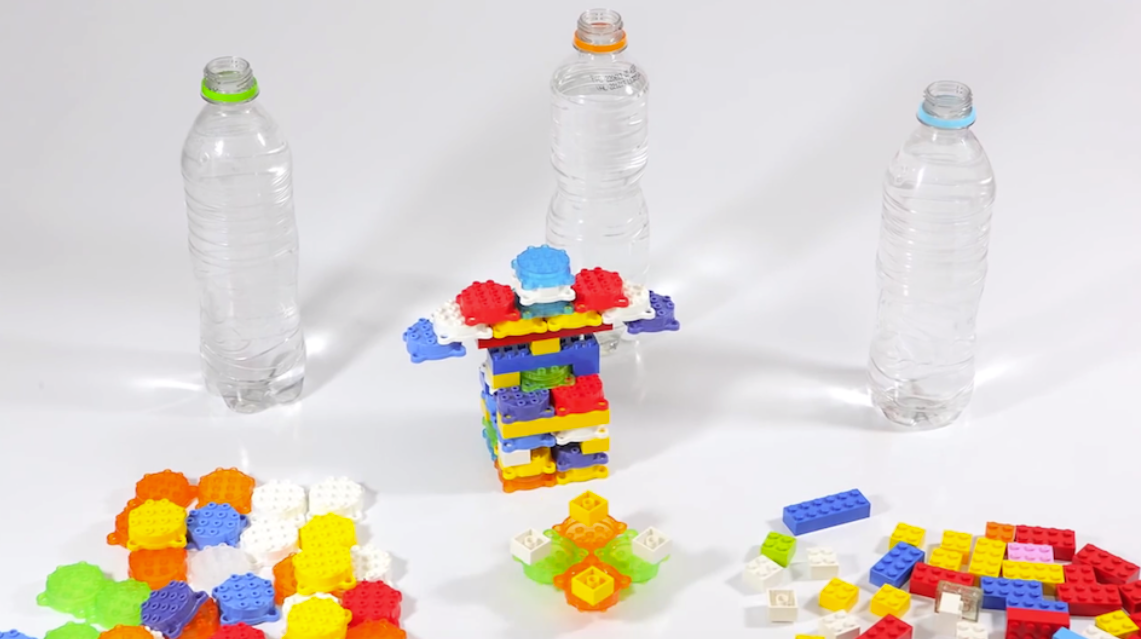 Clever caps
Better reuse than recycle is the motto of Clever Caps. The Brazilian factory designed plastic bottle caps that after use can have a second life as building blocks. Even more clever is that the caps are made compatible with Lego building blocks. One of the company beliefs: ‘We believe in the power of smile’.
www.cleverpack.com.br

SLOactive
Sustainable Luxury Oceanwear is a new social enterprise founded by Janaya Wilkins, who grew up in New Zealand. The company’s mission is to help clean up earth’s oceans through selling sustainable, eco-friendly oceanwear and sharing its sales profits with ocean-related partner charities. The company compiled a beautifully comprehensive webpage on plastic pollution, the problem, the causes and possible solutions.
sloactive.com/plastic-pollution