The world’s first brick made from urine was recently presented by a student of civil engineering at the University of Cape Town, Suzanne Lambert. She has developed a way of turning loose sand into a rectangular brick with the help of human urine. Her discovery has the potential to change the way we use waste to create new products, which is good news for the environment.

The method used to produce the brick is similar to the way that seashells are formed. An enzyme called urease breaks down urea, which is excreted in urine, while producing calcium carbonate through a complex chemical reaction. This cements the sand into any shape, whether it’s a solid column or a rectangular building brick. The sand can be moulded into other shapes.

Lambert and fellow student Vukheta Mukhari have spent recent months testing bio-brick shapes and strengths in the laboratory. They discovered that they can increase the strength of bricks by allowing bacteria to make the solid stronger. 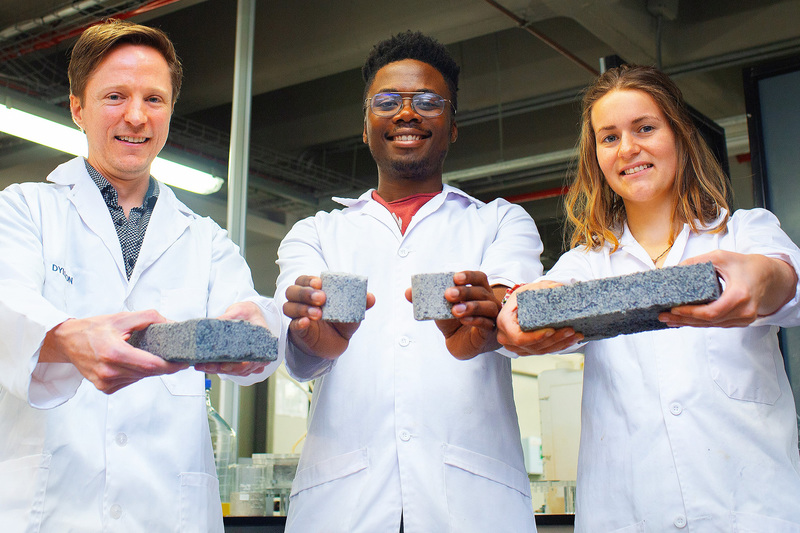 The world’s first bio-brick made using human urine presented by (from left) the Department of Civil Engineering’s Dr Dyllon Randall and his students, Vukheta Mukhari and Suzanne Lambert (photo: UCT)

The potential environmental benefit of the bio-brick is huge. While normal bricks are fired at temperatures of around 1,400 degrees Celsius and produce vast quantities of CO2, bio-bricks are produced at room temperature and produce no CO2.

According to the United Nations Global Status Report 2017, buildings and construction currently account for 39% of energy-related CO2emissions. The report states that over the next 40 years, the world is expected to build a staggering 230 billion square metres in new construction – adding the equivalent of Paris to the planet every single week. Constructing buildings that don’t produce emissions is therefore vital to reducing the sector’s environmental impact.

That’s why reducing energy consumption in buildings and construction is the subject of the WDCD Clean Energy Challenge in Delhi, a city expected to add 20 million new homes in the next ten years. Designers have until 5 December 2018 to submit fresh ideas to deal with the problems that cities like Delhi face when it comes to clean energy.

But the bio-brick’s benefits don’t stop there. In terms of chemicals, the researchers say that urine is ‘liquid gold’. Although it makes up less than 1% of the volume of waste water, it contains 80% of the nitrogen, 63% of the potassium, and 56% of the phosphorous of this waste water. Almost all of the phosphorous in urine can be used to create calcium phosphate, a main ingredient in solid fertilizer.

Once the material for the bio-brick has been extracted, the remaining liquid can even be used to create a second fertilizer. That effectively results in near zero waste, with the urine used as the raw material for three useful products.

While the logistics of collection, transport and processing of human urine need further study, there’s no doubt that this breakthrough could have major consequences on making the most of waste. Something worth considering when using a urinal.

If you want to join the Clean Energy Challenge, here’s how to submit

Receive the latest on the challenge