Clean energy, by and for the peopleHow community & creativity is helping Europe reach its climate targets

Until now, conversations about clean energy have tended to focus on questions of policy, technology or economy. But in Europe, a rising tide of energy cooperatives and citizen-led initiatives is putting something else at the heart of the transition: community. Their vision of net zero is one based on a system that is inclusive and fair, as well as 100% renewable. This means giving power back to the people, one solar panel or wind turbine at a time. Could grassroots organisations like these be the key to a fossil-free future?

Energy as a common good

In most countries today, energy production and supply is left entirely in the hands of a few large companies. Unfortunately, top-down systems like these leave little room for radical change or civic participation. They are opaque, prone to corruption and greenwashing, and often result in more pledges than meaningful action. That is why many yearn for an alternative landscape—one that is designed for citizens, not consumers, and that treats electricity as a common good. Community-owned energy cooperatives allow people to upend the narrative, and take control over the way every kilowatt is managed and distributed in their own neighbourhoods or towns. They are self-organising and funded by their own members, which gives them the freedom to set their own agenda based on the issues they care about the most, whether that’s reducing tariffs, creating jobs, or educating residents.

Many are yearning for an alternative energy landscape—one that is designed for citizens, not consumers, and that treats electricity as a common good.

Since the first cooperatives emerged in Europe in the 1980s, many have shifted their goals to include climate neutrality. Today, the movement stands not just for the decentralisation of our energy system, but also for its decarbonisation. As of 2021, reports suggest that there are more than 3,400 energy cooperatives across the continent who are committed to replacing fossil fuels with renewable sources like sun, wind, heat or biomass. Many of them are located in Germany, where community energy projects are given the green light to sell their electricity directly to third parties.

One award-winning example is located in an old town called Heilbronn, with a population of 126,000. Here, a co-op founded in 2010 now boasts more than 1,000 members, who collectively own 63 solar plants in the area. The impact is remarkable; the scheme is currently responsible for supplying almost 10% of all solar power in the region. Crucially, it’s also helping to raise awareness about the vital role that local communities can and should play in tackling climate change.

Today, renewable energy cooperatives are finally flourishing in countries like Denmark, France, Belgium, Italy and the Netherlands. In the latter, more than 100,000 citizens are currently participating in at least 623 different initiatives across the country. Siward Zomer, cooperative director of Energie Samen, the Dutch federation of energy communities, explains: “We saw an exponential growth of the number of energy cooperatives in the last six years. This year the growth in the number of new initiatives slowed down, but the activities and projects of the existing ones grew and became bigger and more professional.” He notes that many of them also diversified their activities, to include innovative heating, renovation and even mobility projects like car-sharing.

The take-up has been slower elsewhere in Europe, where legal and political barriers abound, but there are signs that a positive change is coming. Spain, for example, now boasts some 30 renewable energy cooperatives, many of which have been influential in training other emerging communities across the continent.

Support for the movement has also been growing at the EU level. In 2019, the commission adopted the Clean Energy for All Europeans package that, among others, introduced to the EU legislation the concept of ‘energy communities’. While the package was not perfect, it represented a huge milestone. For the first time, Europe had officially acknowledged the need for citizen participation on the path to zero emissions. 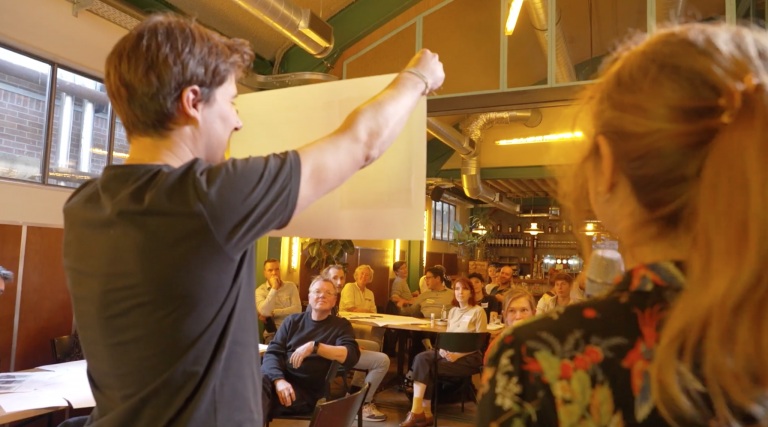 Of course, with big change often comes even bigger resistance. Keeping an energy cooperative off the ground isn’t easy, and the movement is facing pressure from many angles. Big energy in particular, is doing everything they can to defend their share of the market. For community energy to make a significant enough difference in the long run, it will need more streamlined support from policymakers, but also from all other sectors in our society. Where do the creative industries fit in?

The narrative should also be about joy.
So not a story of less, less, but a story of more, more.

Last year, this was the question that led What Design Can Do (WDCD) to participating in the research project, A New Narrative for the Energy Transition. The primary task was to explore a better way to communicate the many challenges and opportunities of a more sustainable system to the wider public. When it comes to making the switch, the report found that ‘in society there is enthusiasm, but also resistance.’ For many people, climate neutrality remains a distant and difficult concept. If we want greater acceptance for renewable energy projects—whether they are smaller or larger in scale—we first need to understand that the way we talk about them matters. Therefore it is crucial that governments, civil organisations and other stakeholders ‘start telling a new story.’

To arrive at this new story, WDCD facilitated a series of research and design meetings between creatives, economists, scientists, philosophers and various municipalities in the Netherlands. One of the most interesting outcomes from the research is the importance of better communicating the ‘promise’ of a clean energy future. Instead of focusing on necessity—on all the things we have to do and change—experts suggest that we focus on how the transition could actually enrich our lives. ‘The narrative should also be about joy,’ said one participant. ‘So not a story of less, less, but a story of more, more—though not in the flat economic sense. In the sense that you become more human, and more opportunities arise.’

The report also reaffirms that there is untapped potential in exploring the social aspect of the energy transition. It is vital to emphasise that the task ahead is not just about cutting carbon emissions but also about promoting a healthier living environment, reducing energy poverty and increasing social cohesion between friends, family and neighbours. By linking the energy transition to broader social issues, we create more room for linking opportunities.‘In the end, it’s more about empowerment than about participation,’ explained an expert. ‘People want to feel like they have control over their lives, and co-ownership of innovations is a good motivator.’

All signs, then, seem to point towards the need for a more human approach to the energy transition. But even with increased participation by local communities and cooperatives, the road ahead is long. Right now, EU targets state that renewables should make up 40% of all energy consumption by 2030. Many will point out that the heavy lifting required to achieve this remains in the hands of the energy industry at large. Of course, what we probably need to see is more collaboration, as well as competition. To avert climate catastrophe, we’ll need both David and Goliath, working in tandem. Until then, community and creativity may be two of the best tools we have in imagining—and building—the energy future we want.