‘We must rethink the way we design our world’WDCD Live Amsterdam 2018 report: Main stage, Day 1

For its eighth edition WDCD returned to the beautiful and intimate setting of Amsterdam’s main theatre hall, the Stadsschouwburg. Along with the impressive line-up of speakers, this edition marked the closure of the Climate Action Challenge with a spectacular Demo Day, as well as a simultaneous design jam in Amsterdam, Nairobi, New Delhi, São Paulo, and Mexico City in preparation of our new global Clean Energy Challenge. At the same time WDCD Live Amsterdam saw the kick-off of the No Minor Thing Challenge on sexual exploitation of children, organized in collaboration with the Public Prosecution Service. In every way the atmosphere was vibrant and activating.

Activation is just what WDCD is all about, as co-founder and creative director Richard van der Laken told in his introduction to this eighth edition of WDCD Live Amsterdam. In different parts of the world the platform aims to mobilize designers, NGO’s, government bodies and companies to use design as a tool to address urgent societal issues. The platform’s activities, including live events, media and design challenges, provide a mixture of inspiration and activation. Over the years the focus is shifting towards the latter with a growing amount of challenges that ask for new ideas to address pressing problems in society. 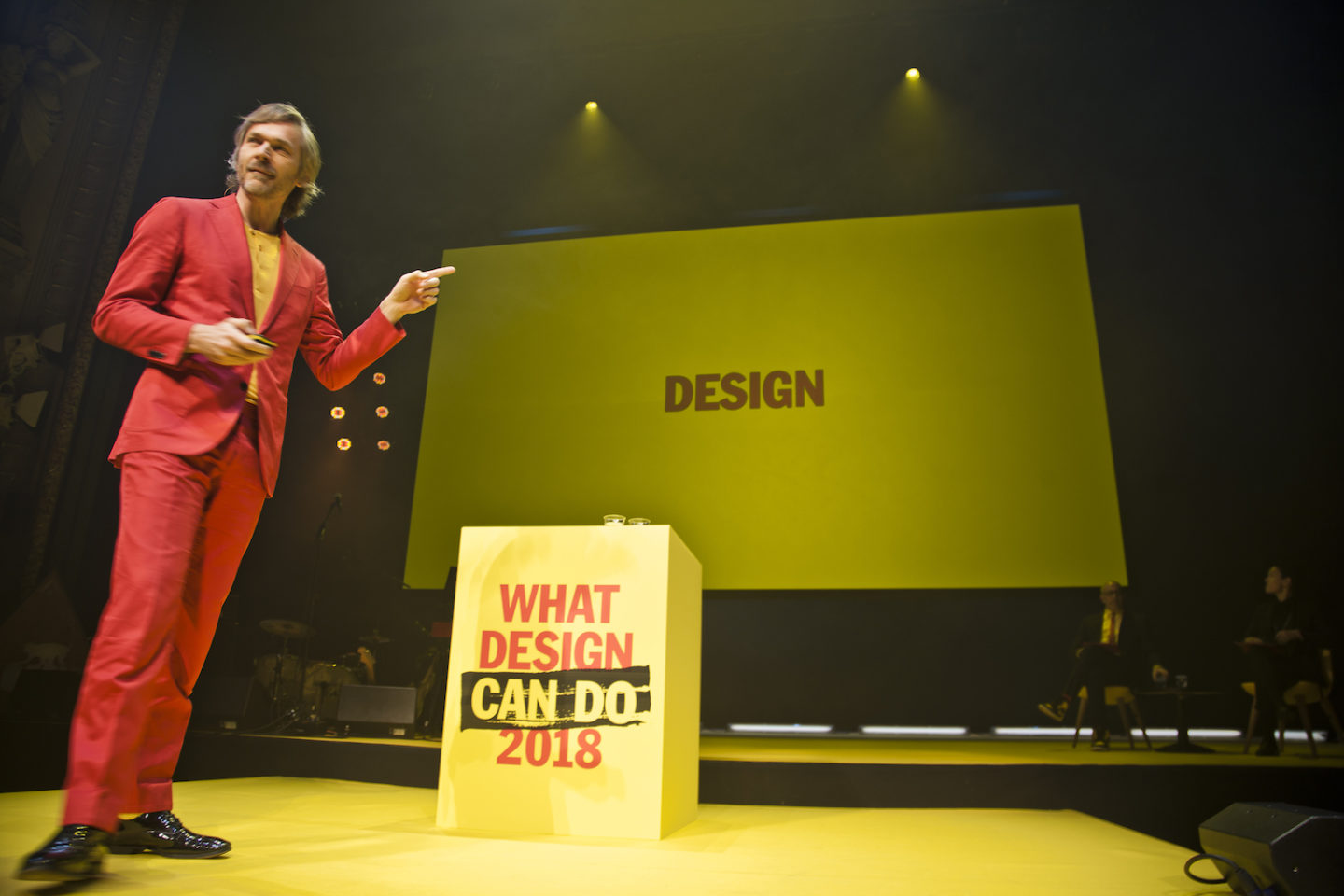 Van der Laken revealed that the next challenge, due to be launched in September, will address energy issues in the metropolitan area, as most energy is consumed here. To investigate the topic, teams of designers and experts joined in a simultaneous design jam in five cities around the world. Over the two days of WDCD the teams gave short impressions of their activities in live connections, proving that WDCD is reaching out from Delhi to Mexico City.

The fierce urgency of now

Opening the main stage programme of Day 1, the dean of Parsons School of Design in New York, Joel Towers, sketched the huge tasks mankind is faced with, meanwhile expressing his optimism that we will be able to adapt and make change. Towers explained that the era we live in, also called the Anthropocene, is a time in which human action is the dominant force of change. So far for the worse, as he illustrated with a convincing graph on the rise of average global temperatures. ‘The moment we live in is the result of our own actions,’ he said. ‘So, we have to rethink the way we design our world.’ 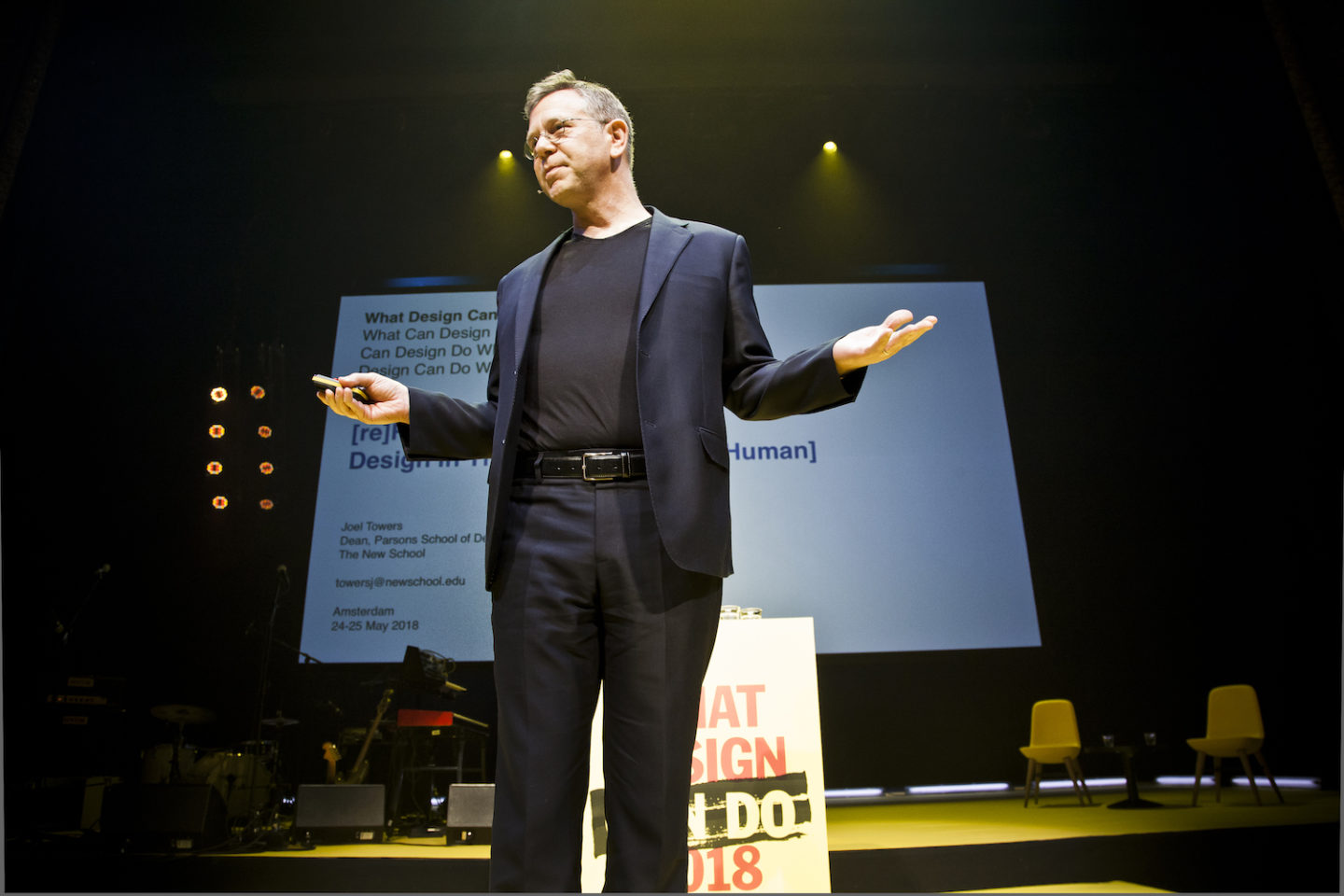 Referring to some examples of work by Parsons graduates, Towers shared his optimism that we will be able to mend what we wrecked. Quoting Marten Luther King he said: ‘We must confront the fierce urgency of now. That is what the Anthropocene means. It is the time in which design must play a transformative role in rethinking how we are to live in this world. As an architect and educator, I find this an incredibly optimistic moment to live in. If we take the agency of design and work collaboratively, if we reframe the criteria by which we evaluate the success or failure of our actions, then the Anthropocene is a turning point in history in which we realize the potential of our species to transform this planet for the good.’

As if to prove Towers’ point, Marjan van Aubel presented Power Plant, the project that made her one of the thirteen winners in the Climate Action Challenge. As a self-declared solar designer, Van Aubel seeks to incorporate advanced solar techniques in our daily lives in more aesthetic ways. She integrated transparent solar panels in her Current Table and also in new versions of stained glass in windows. Power Plant combines transparent solar glass, hydroponics and LED light in greenhouses to efficiently grow food on any location, be it on rooftops in the city or in remote desert areas. 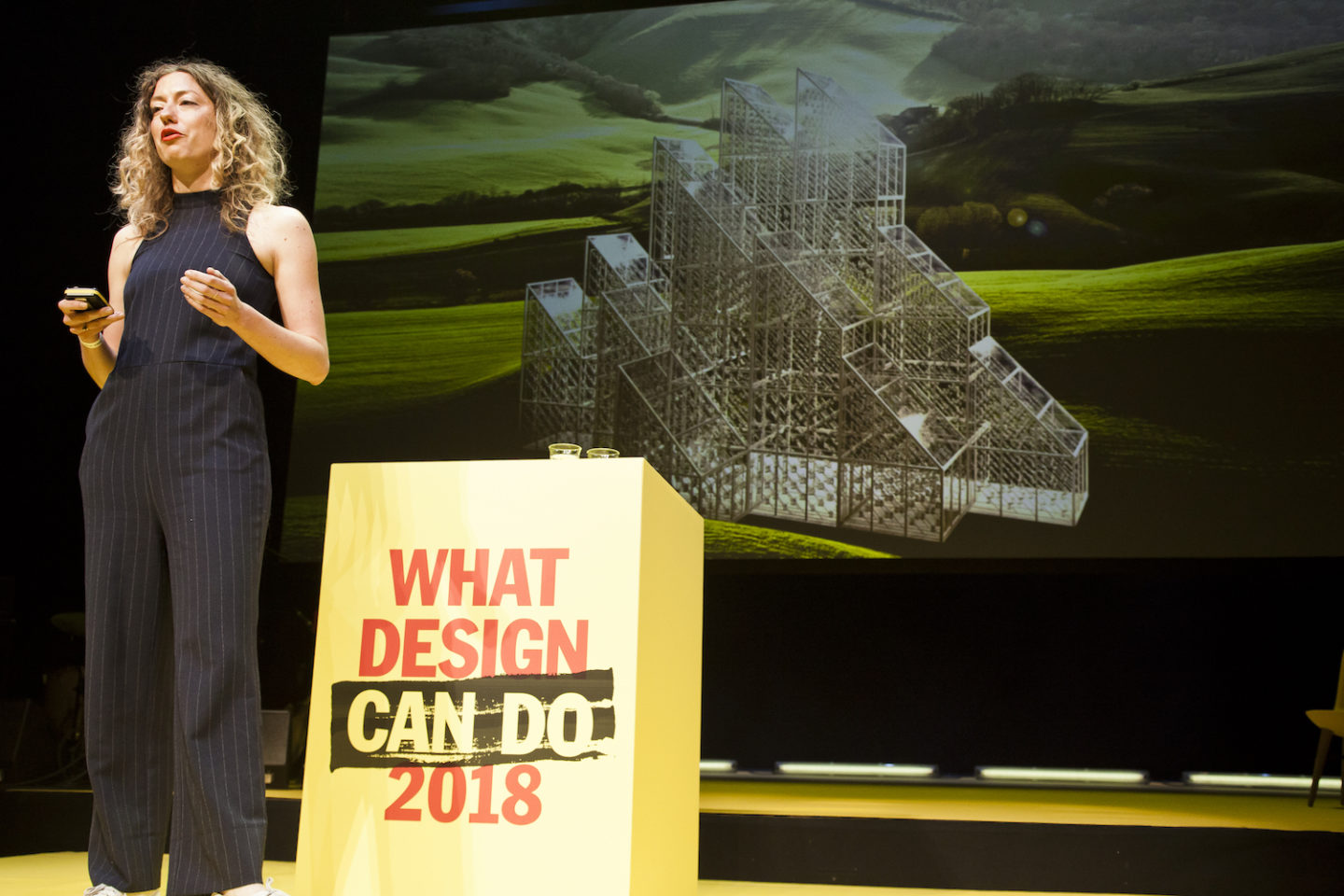 New light on the refugee

Acclaimed graphic designer Marina Willer, a partner of the renowned design agency Pentagram, briefly showed the work she has made for organizations including Amnesty International, Oxfam, and most recently the animal rescue charity Battersea Dogs & Cats Home. ‘But,’ she said, ‘with everything going so wrong in the world, with rising xenophobia, climate change, and so on, at a certain point I felt I had to do something else.’ 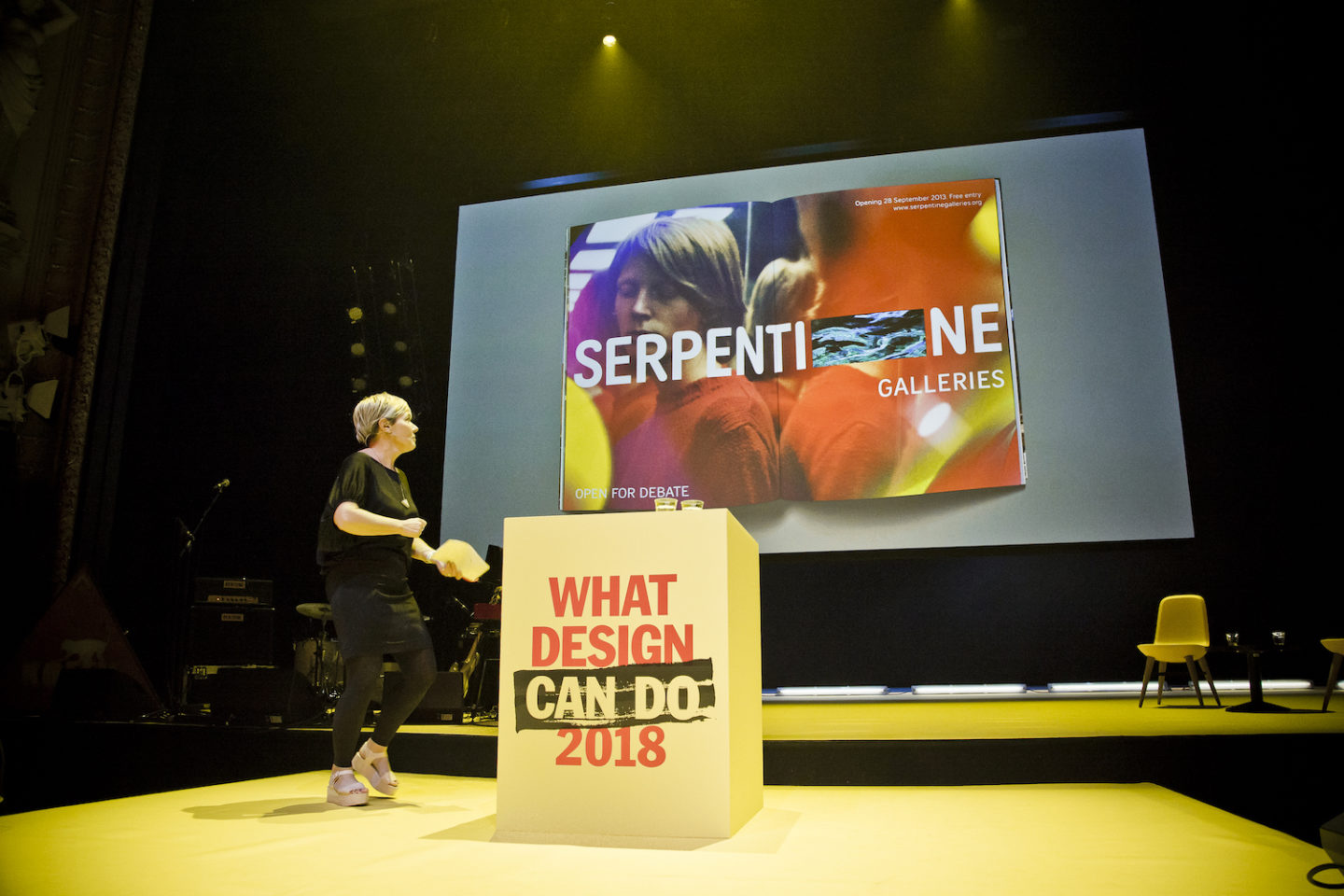 Marina Willer danced through the presentation of her work

In response to the refugee crisis of 2015, Willer, who was born in Brazil from a Czech immigrant, decided she wanted to make a film to shed new light on the issue. The inspiration for this she found in her own history, as her father’s family was one of the few families who managed to flee the horrors of the holocaust. The family ended up in Brazil, ‘completely by chance, it could have been anywhere’ and in the diversity of that country turned into ‘a real fruit salad’ of nationalities.

Willer’s film ‘Red Trees’ thus became a very personal answer to the way we see and treat refugees while ignoring the richness they add in so many ways to the communities they enter. In this case, film was the best medium to bring the message.

The quicker way to scale up

Designer Dave Hakkens also uses video a lot to spread his tools and ideas for plastic recycling. After realizing as a student at Design Academy Eindhoven that less then 10 per cent of all plastics in the world are recycled, Hakkens wanted to do something about it. He started to develop a blueprint for easy to build machines for small scale plastic recycling. By sharing these as open source in combination with entertaining instructional videos, Hakkens built a worldwide community of plastic recyclers. 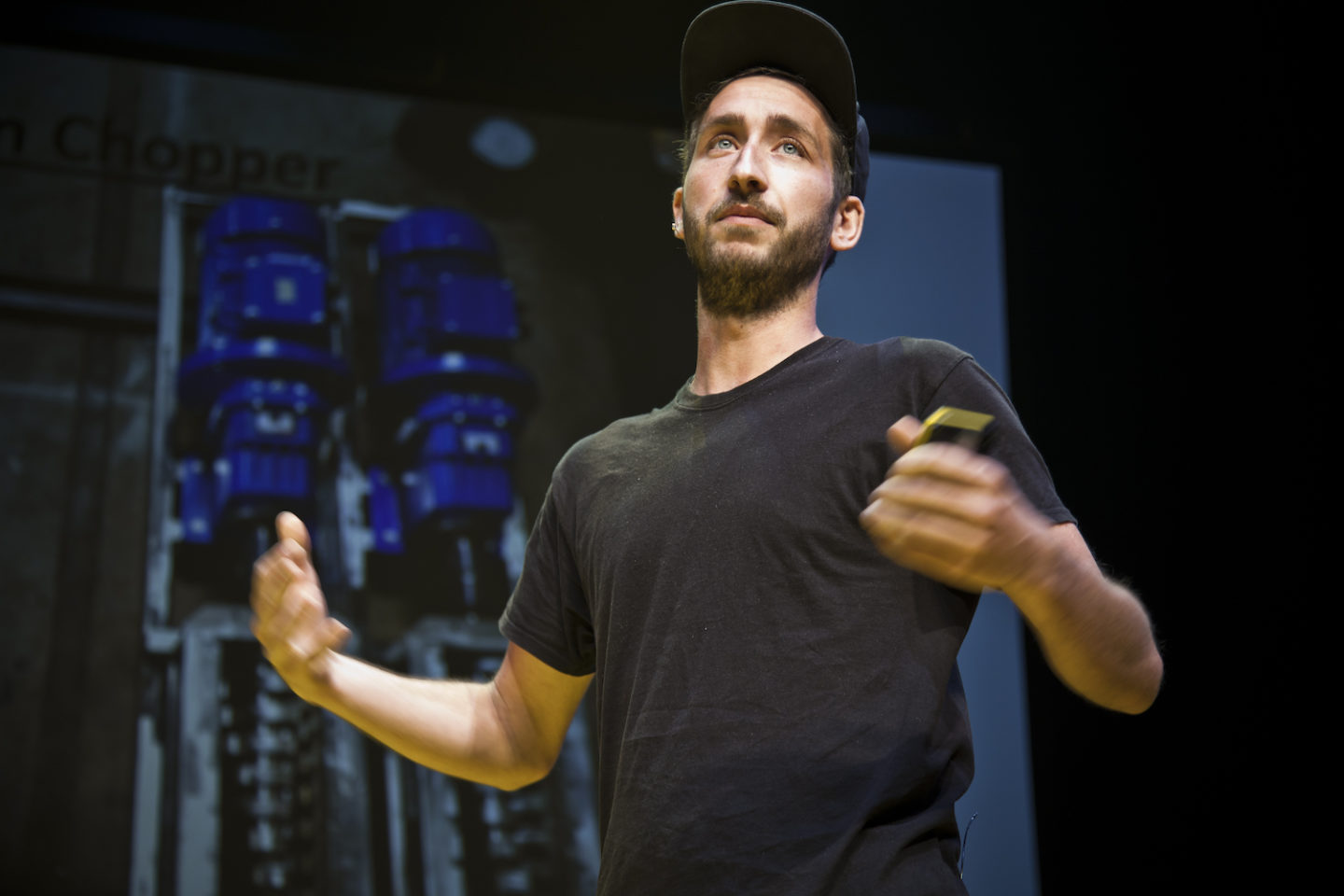 Five years onwards, around 200 workspaces are operational everywhere in the world, with a new one added every week. The online Precious Plastic platform meanwhile encourages collaboration, monitors new developments within the community and provides an online bazar where Precious Plastic items can be traded. Building a community this way makes it possible to scale up much quicker, Hakkens said, while at the same time admitting that Precious Plastic will only partly solve the world wide plastic waste problems. ‘We need to attack this problem from all angles,’ he said.

The true face of African identity

‘Why have we limited ourselves to believe that African fashion is made of Dutch wax prints?’ architect and photographer Sunny Dolat from Nairobi, Kenya asked the audience in the afternoon session. Dolat is co-founder of The Nest Collective, a group of artists who across disciplines investigate their shared identity. ‘In our work we are constantly questioning and imagining the past, present and future of our black African identity and the intersection with feminism, race and sexuality,’ he told. 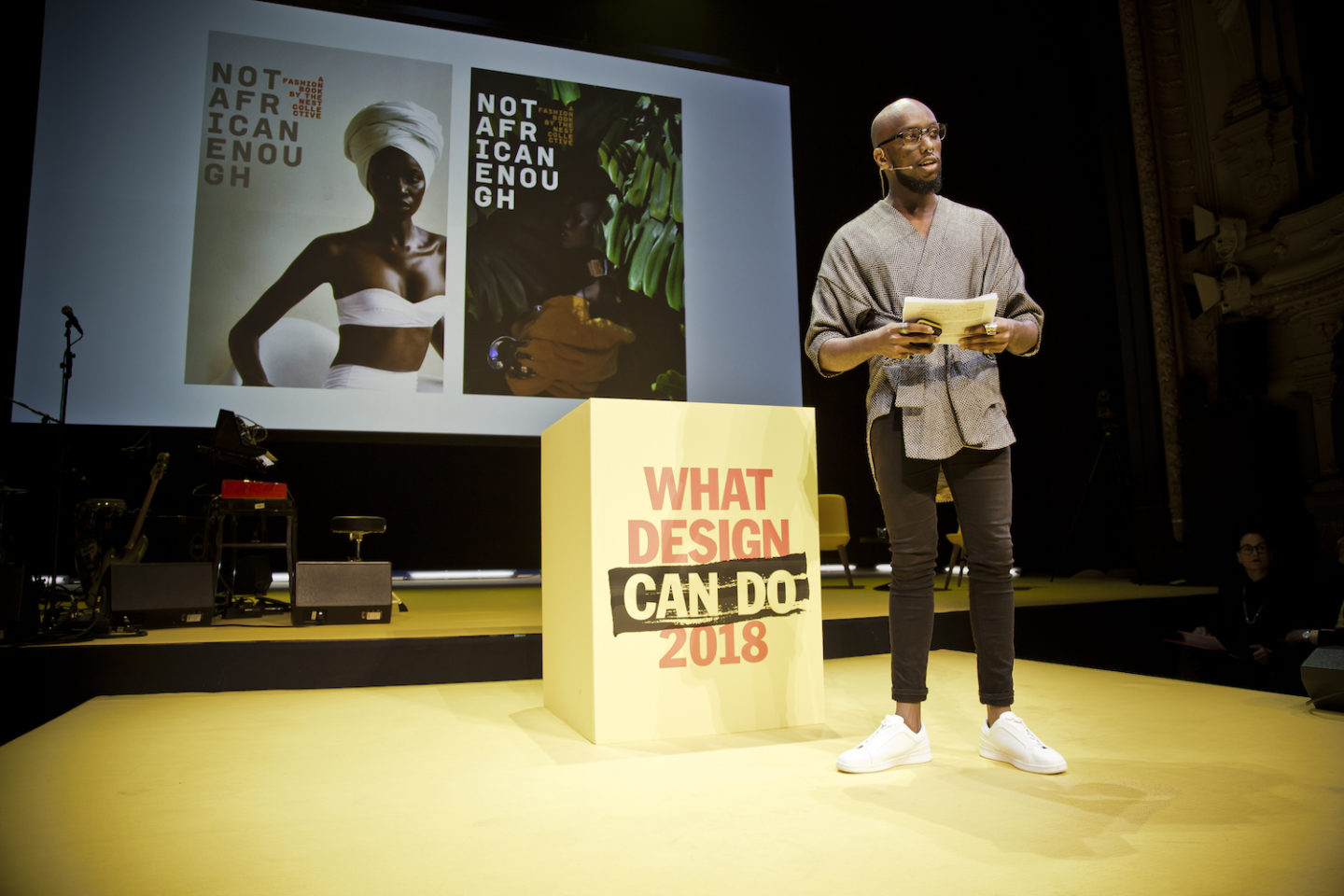 The Nest gained world attention in 2014 with the film ‘Stories of our lives’, which originated out of dissatisfaction with the perception of queer people in Africa. The group collected 250 stories, some of which were used in the film that became an unexpected success, partly due to the fact that the film was banned in Kenya. So far, ‘Stories of our lives’ has been screened in more than 100 countries.

After experiencing the difficulties with finding funding for the project, Dolat and his fellow artists took the initiative to start a fund for creatives, called Hiva. Until now, Hiva invested in some thirty projects.

The Nest’s most recent project is the fashion book Not African enough, which counterbalances the global preconceptions of what African fashion should look like by presenting the work of Kenyan designers who in the Nest’s view express the true and current African identity.

Cities are our bravest hope

The last speaker of the day, the famous urban theorist Richard Florida, author of The Rise of the Creative Class, somewhat mirrored the words of Joel Towers at the beginning. From Toronto, through a live connection, he too stressed the uniqueness of the times we live in and equally shared his optimism that things can turn for the better. 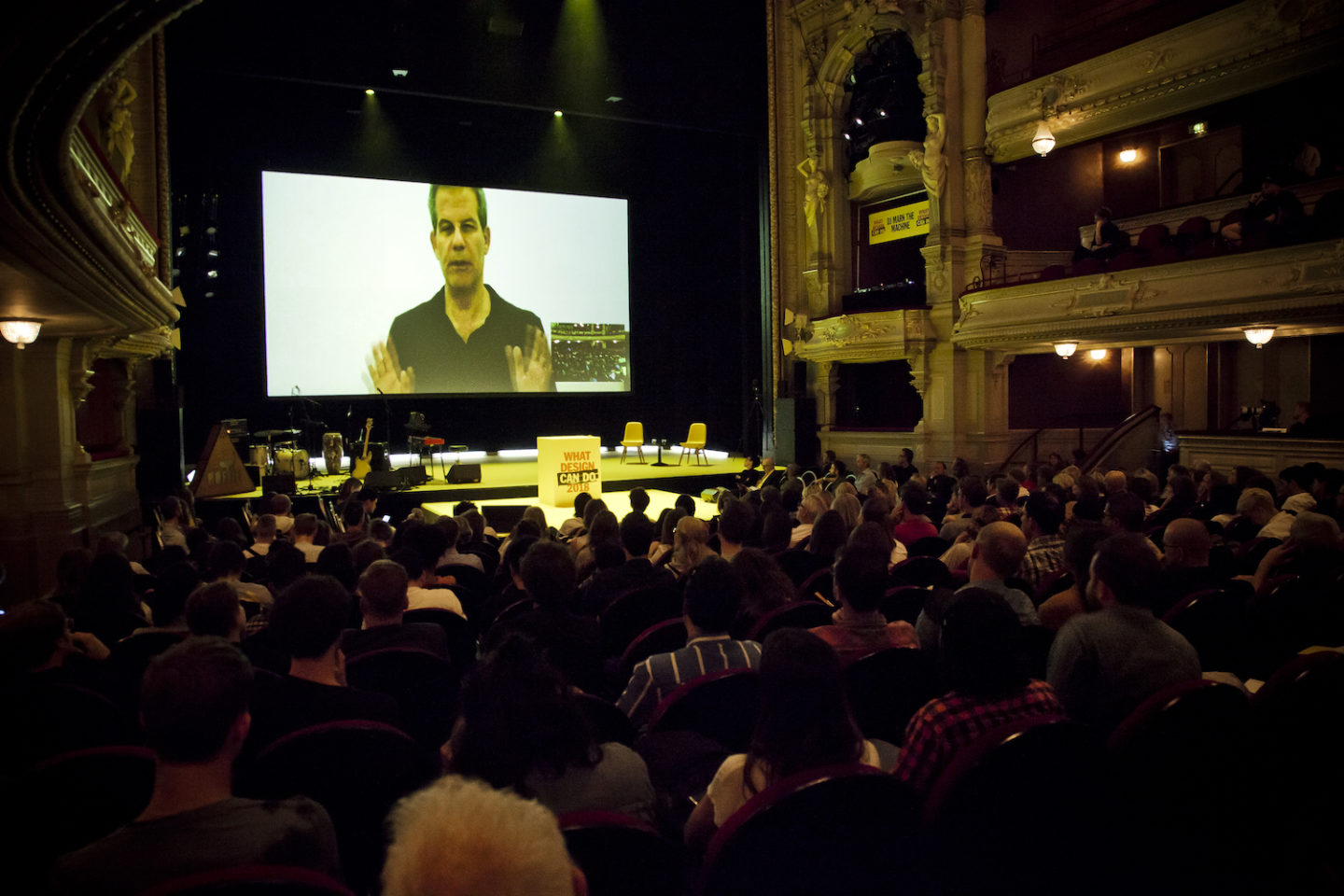 ‘We are going through the biggest disruption in human history,’ Florida stated. In the past fifty years we’ve seen a dramatic shift from physical to mental labour. At the same time half of the world population has concentrated in cities, and this urban revolution hasn’t ended yet considering the expected explosion of cities in Africa and Asia in the coming decades.

The backlash of these developments is that new divisions have risen between the creative and the non-creative classes on one hand and the urban and rural areas on the other.

‘The new urban crisis is a crisis of us falling further apart,’ Florida said, referring to the evisceration of middle class communities, segregation and gentrification. At the same time, Florida continued, our cities are our bravest hope for diversity, the force that drives change, as cities always have brought people of many different background together. ‘The challenge is to stove the creative furnace that lies in every single human being to elevate the 66 per cent of us that are left behind.’

The reason to remain optimistic, Florida said, ‘is because cities remain the motor force of our society. Cities are the places where creativity is contained and generated and cities are the place where diversity can flourish. And over time and with hard work and vision and leadership of all of us I think we can overcome the forces of backlash and be on our road, in time, to a better, more creative and more sharing and inclusive society.’

At WDCD we couldn’t agree more.