One-third of food produced for human consumption is lost or wasted globally, which amounts to about 1.3 billion tons per year, according to the Food and Agriculture Organization (FAO) of the United Nations. Avoiding the waste will not only make more food available for the estimated 900 million hungry people in the world. It will also save water and energy resources and reduce greenhouse gas emissions. Focusing on food waste reduction can therefore be a rewarding approach for participants in the Clean Energy Challenge in Nairobi.

In Kenya’s capital Nairobi the Clean Energy Challenge asks the creative community to think of ways to make the journey from farm to fork greener and fairer. With a population growing fast towards an estimated 14 million in 2050, there is much to say for a more efficient and sustainable food supply system.

The FAO estimated in 2011 that roughly one-third of the physical mass of all food is lost or wasted around the world. In Sub-Saharan Africa, the estimate is even higher, roughly 37 percent. When looked at grains only, the losses have been estimated to be around 20 percent.

This latter percentage is, however, slightly higher than estimations by the African Postharvest Losses Information System (APHLIS), a network funded by the European Commission for the estimation of Postharvest Losses (PHL) for grains in eastern and southern Africa. APHLIS measured losses of between 14 and 18 percent between 2003 and 2014. Figures for Kenya fall within this range, with differences between different crops. Maize is most lost, on average 17,5 percent, but 22 percent in the Nairobi region (figures of 2012).

33 percent of produce is rejected

A shocking fact is that part of the food loss in Kenya is caused by the conduct of European traders and retailers importing vegetables and fruits from the country. Horticultural exports make up 23 per cent of Kenya’s GDP, making it the country’s greatest foreign exchange earner. Fruit and vegetables are the second and third most important exports after flowers. However, not all of this food reaches Europe, according to a report by FeedBack Global. Due to cosmetic requirements, up to 33 percent of the produce is rejected by the importing traders. The rejected produce is at best used to feed livestock, but otherwise used for compost or just thrown away. Unfair trading practices also contribute to food waste, for instance when orders are cancelled untimely. 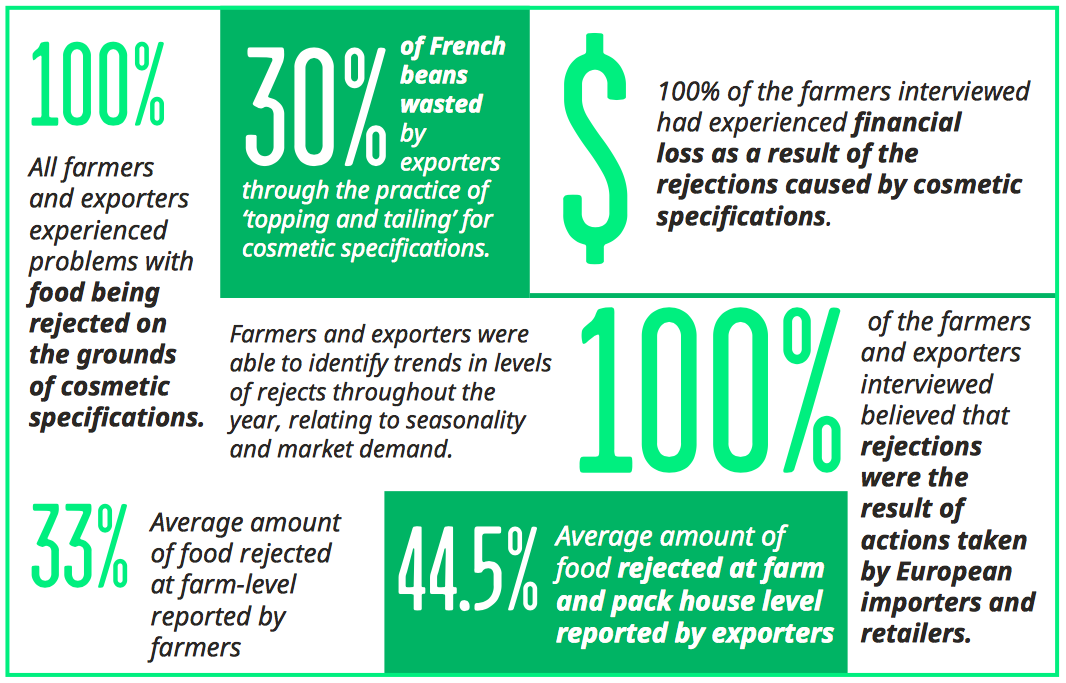 Infographic from the FeedBack report

What can designers do? One relatively easy solution designers can offer, is to make the farmers a website through which they can sell their food. Organic farmer Lilian Kanari has seen the difference since two students produced her Kalimoni Greens web shop through which she delivers 200 orders a week of produce from her three small-scale farms. To Reuters she explains that the online contact with customers prevents a lot of food waste in comparison to the time when orders were made by telephone. Knowing the customers’ consumption patterns better enables her to plan her crops better.

‘Farmers need to be part of this digital revolution so that they can play a role in ensuring there is no food waste from the agriculture sector,’ says Jerome Ochieng’, principal secretary at the Ministry of Information, Communication and Technology. Online sales, meanwhile, also help to increase the farmer’s income.

Proper storage and cooling facilities are another approach to counter food wastage. Kenyan IT graduate John Mbindyo developed a revolutionary, low-cost solar-powered walk-in cooling box that helps farmers and local retailers to store food and keep it fresh longer. Mbindyo designed the system after a local store vendor had told him he was forced to throw away lots of his stocks after two or three days because of lack of suitable refrigeration facilities. He founded FreshBox in 2016, offering farmers, market vendors and retailers refrigeration services through a subscription system for no more than 70 Kenyan shillings (€0.59) per day. In the boxes their produce is kept at 5°C, staying fresh for as long as 21 days. The boxes are made and assembled in Kenya, providing also local employment opportunities.

FreshBox and its founder John Mbindyo

Meanwhile, there are plenty of campaigns fighting post-harvest food waste at different levels, like the UN endorsed Think.Eat.Save campaign. However, food is still wasted and game changing ideas are needed to counteract the discard of crooked French beans and odd sized corn.

Want to help? Then submit your idea the WDCD Clean Energy Challenge.

Top image: Baby corn rejected for either being too long, too small or too thick (image from FeedBack)