Past Challenge winners – where are they now?See how 5 winners of WDCD Challenges continue to grow their impact today

After an extraordinary open call, the WDCD No Waste Challenge now moves into an exciting new phase. Over the next few months, experts in design and climate action will review the 1409 submissions we received, and come up with a shortlist of outstanding ideas. For 16 eventual winners, the end of the competition will be the beginning of something bigger, as they enter a development programme designed to propel each project towards real and lasting impact. What can we learn from those who have triumphed in the past? Keep reading to discover how five past challenge winners have fared post-programme, and what makes this year’s award package the most promising one yet.

Makers Unite was one of five finalists in the first WDCD Challenge, which called upon creative thinkers to use the power of design to help support the reception and integration of refugees around the world. At the time, Makers Unite planned to connect refugees and EU locals by co-designing engaging products and narratives, starting with upcycling life vests and boats collected on Greek shores. Started in Amsterdam and Athens, the founders imagined a platform that would enable newcomers and long-term residents to develop meaningful relationships while creating products that support the circular economy.

Five years since winning the Challenge, Makers Unite is well on the way to becoming a self-sustaining social enterprise centred around a growing community of makers, mentors and activists. Successful collaborations with commercial partners like Ben & Jerry’s, Bas Kosters, Filling Pieces and the Stedelijk Museum have allowed them to finance a thriving social inclusion programme, called The Makers Unite Creative Lab. The focus of this programme is to offer free creative training and career development opportunities to asylum seekers. To date, Makers Unite have launched 15 successful Creative Labs, serving 187 participants and counting. 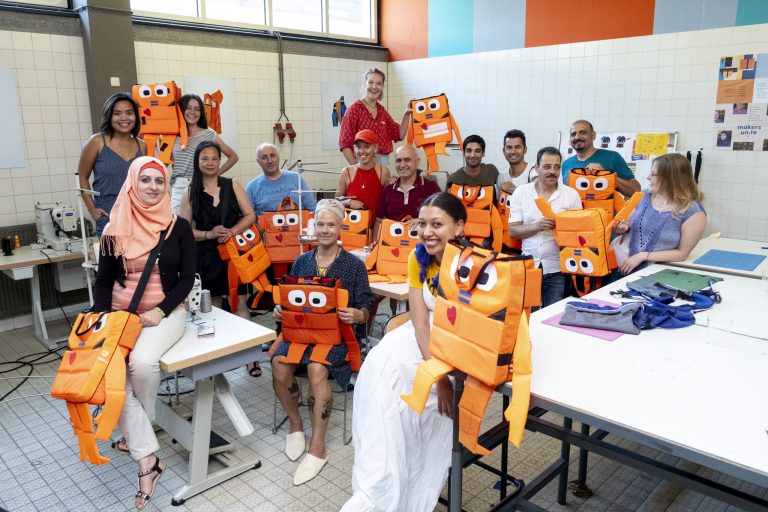 The next WDCD Challenge focused on finding bold, innovative solutions to combat the impacts of climate change. One of the finalists was Lot Amorós, an engineer and artist who entered the competition with an early prototype for Dronecoria. Inspired by both cutting-edge technology and ancient farming techniques, Lot and his team had developed an aerial machine “to help reforest the planet”, capable of sowing thousands of seeds across a landscape in minutes.

Thanks to the funding and publicity gained from the Challenge, Lot was able to develop the first real-scale prototype of his sower drone. Over the next few years, Dronecoria traveled the world, experimenting with different funding pathways including private donations and Crowdfunding. During this time, the project formed partnerships with Universities in Brazil and Thailand, and continued testing their technology in various countries, and publishing their research on their open source platform. In 2019 they were contracted by Spanish non-profit Alvelal to perform their first official reforestation project, with the goal of dropping 100,000 seeds along 20 hectares of land in the province of Almeria. Follow their blog to learn more about all of their experiments and projects! 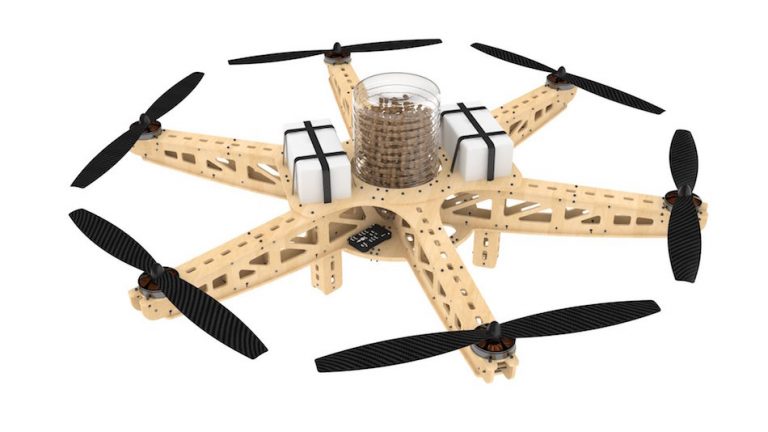 Developed by Hugh Weldon and Ahmad Mu’azzam, Evocco is a mobile app that helps you track and reduce the carbon footprint of your food shopping.  It does so by rating products according to factors such as greenhouse gas emissions, habitat loss and water usage to name a few. Over time, the app provides personalised tips based on your activities, making it easier for consumers to make more sustainable choices.

In 2018, Evocco was little more than a powerful concept; but by the end of the Challenge development programme, the team was able to unveil the first high fidelity prototype of their product. Since then they have focused on user testing and networking, making connections with key industry players (like Nestlé and Unilever) and raising funds through prizes and investors. Next, the team is working on expanding Offset: a fresh new feature that allows you to plant native, biodiverse woodland to make your shopping carbon neutral. Want to give it a try? Available for free on iOS and Android devices, the app has been downloaded more than 1,000 times since its launch at the end of last year— and the team intends to have 50,000 monthly active users on the app by 2022. 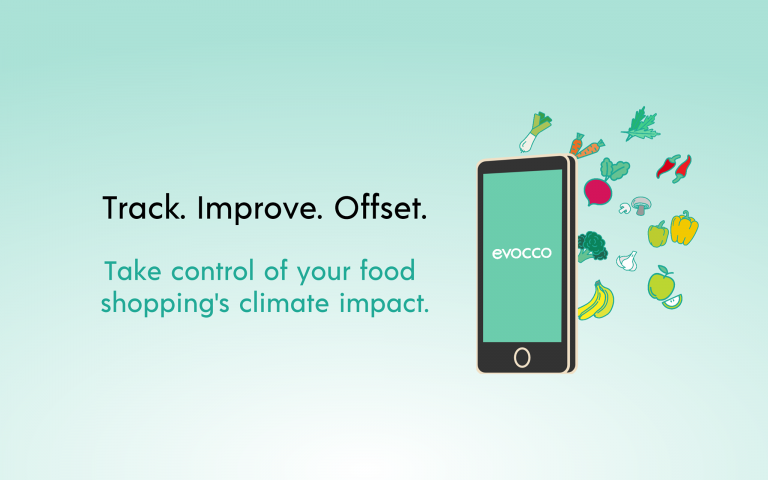 Ecolana is a recycling platform which was founded in 2016 by Lisseth Cordero and Alejandra Valdez. The team started by creating the first recycling map in Mexico City, with the hope of building connections between two main types of communities: recycling heroes (citizens) and recycling centres (collectors). They believed that access to information would be a key component to tackling Mexico’s growing waste problem, and this collaborative, knowledge-sharing approach remains central to their success.

Ecolana have also launched major campaigns with big producers like Tetrapak and Natura, to help promote recycling and make it available to their huge consumer base. Their network currently brings together 10 such commercial clients, with 50 recycling centres and nearly 200,000 individuals. What’s next? The team plan to release a brand new website and app in the near future, and look forward to expanding their reach to other cities in Latin America.

Submitted by Delhi-based designer Monish Siripurapu, Beehive is a biomimetic cooling system made out of clay pots. The energy-efficient device works through evaporative cooling, a simple but effective method that can be traced back to the ancient Egyptians. When water is pumped through the clay structure, the temperature of the surrounding air is reduced. The idea was that Beehive installations could provide not just functional but also beautiful alternatives to the conventional air conditioners that are a constant presence in many buildings across India.

As of today, the team has successfully installed Beehive in 20 different locations, including factories and new builds. Among their biggest challenges is the need to standardise the manufacturing process, which is fully dependent on local potters and craftsmen. Still, the start-up continues to grow and inspire both artists and energy pioneers in India, with strong interest in the project coming from both the private and public sectors. To follow their journey, check out their latest blog posts here. 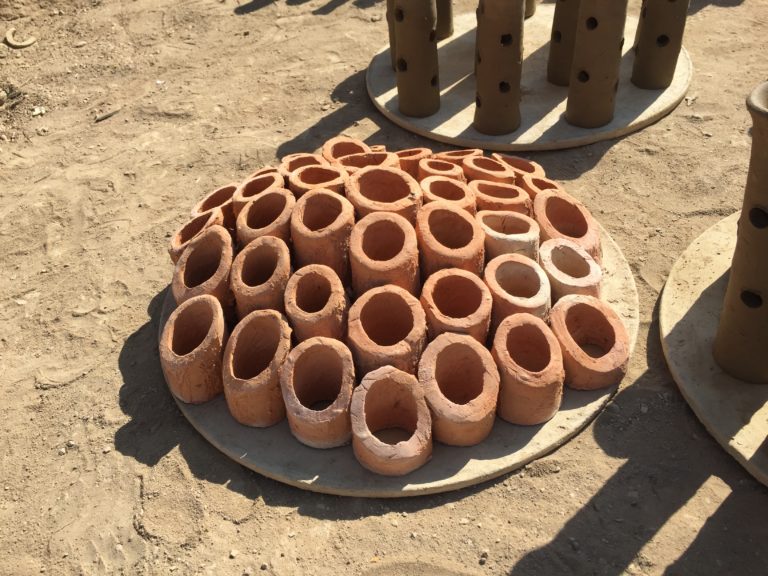 These projects offer a glimpse of what winning a WDCD Challenge could mean for innovators in the long-run. Of course, they are not alone—since launching our first design competition in 2016, we’ve seen a total of 38 winning teams complete the WDCD development programme. While the road to success is not always straightforward, many of these ideas have evolved into tangible products and business cases. We’re happy to report that from the 20 most recent winners, 80% are still active and thriving, while 70% have formed lasting partnerships with organisations that can take their initiative to the next level.

This year’s No Waste Challenge will continue in the same vein, with winners gaining access to funding as well as a six-month development programme which we co-created with experts from the global Impact Hub network. By combining research and design (WDCD) with training and entrepreneurship (Impact Hub), this programme will provide unique support for the winners, enhancing skills and opening doors to further funding and development.

Learn more about the No Waste Challenge award package here. If you would like to dive deeper into the outcomes of our previous Challenges, keep an eye out for the impact report we will be publishing very soon!

Top image: The team behind Makers Unite, one of the first-ever winners of the WDCD Challenge programme, receiving their award on stage.