‘The winners share a sense of purpose and urgency’Clean Energy Challenge: Interview with jury member Hedwig Heinsman from Amsterdam

‘The thrilling thing of the WDCD challenge was that we weren’t looking at paper projects. With architecture competitions, you know that most entries will end up in the paper shredder, unbuilt,’ says architect Hedwig Heinsman, co-founder of DUS Architects that initiated the 3D Print Canal House. Heinsman represented Amsterdam in the international jury of the Clean Energy Challenge.

‘In this challenge, however, even the proposals that didn’t win still have tremendous potential,’ she continues. ‘They could lead to a start-up or to further research. I found that really inspiring. I kept thinking: I wish I’d thought of that!

‘The differences between them did make it difficult to choose, because it felt like comparing apples with oranges. What they do share is a sense of purpose and urgency.

‘The challenge itself was brilliantly organized. We jurors did our homework in advance by making a pre-selection. Some of us arrived with favourite proposals that were eventually eliminated. Though they looked very branded and slick, it turned out that the makers lacked commitment. We phoned lots of entrants to find out if they were really committed to making their idea a success.’ 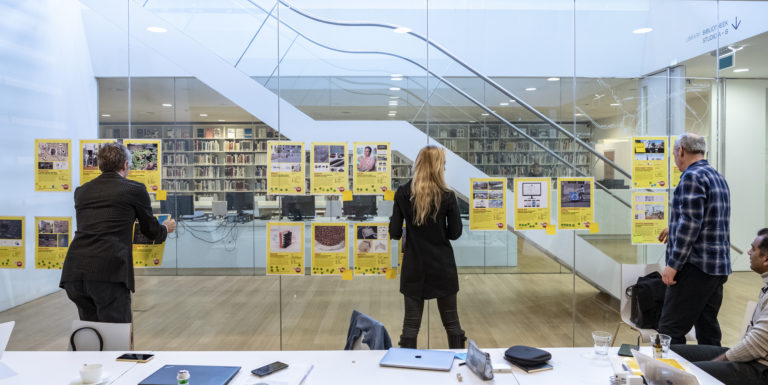 ‘The jury included experts from lots of fields, not just design. That was very positive because clean energy is about much more than design. It was often a case of: “This looks good, but what are the economics behind it?” My background didn’t always enable me to evaluate entries fully, so it was great to have experts who could consider them from an energy perspective or social perspective, for example. After all, good design is not just about looks, but about the sum of the parts, a puzzle where everything fits together.

‘Even so, the winners are both beautiful and feasible. Take Amsterdam, for example. You could market Solar Visuals and Boat Battery Swap right away. These innovative ideas respond to the context of Amsterdam, of canal houses and the world of boats and water. At the same time, they could serve as solutions for cladding housing, and facilitating waterways all around the globe.

‘Block-e, the student winner, was more provocative. This stimulating proposal asks: What if energy became the new currency? The makers want to raise awareness and connect the idea of making money by generating energy. That’s a whole new way of thinking, and who knows, it might become reality in a decade.

‘Someone on the jury coined the term ‘global babies’ to describe solutions that could be applied in lots of places. The digital transition we’re now in means that the issues at stake in various places at a global level are closely interconnected. The differences between places are maybe not as big as we imagine. A solution devised for Delhi might easily be applied in Mexico.

‘These ideas already exist, and the Clean Energy Challenge gives them a boost and recognition. Lots of the entries are well past their incubation stage and are really concrete. Many of the winners have already proven they work. WDCD can help them go a step further in the Accelerator Phase.’