It took a global pandemic to slow many of us down and reassess our relationships with the places we call home. For Taina Campos, a designer based in Mexico City, it only confirmed something that she had suspected for years: that most of the things we are looking for can be found in our very own backyards. Today she is part of a new crop of artists and makers who are building a vision of Mexican design that prioritises local materials, resources and techniques.

After several years living and working in Rio de Janeiro, London, Paris and Oaxaca, she returned to Mexico City where she now develops research and design projects in fields like sustainability, biodesign, gender, education and future studies. Taina’s knack for seeing possibilities in what others take for granted goes hand-in-hand with her firm belief that diversity, equality, fair trade, and a community-first approach are the basic ingredients of good design.

Earlier this year, it was Taina’s work with biomaterials that put her on the map as one of the most exciting figures in Mexican circular design. During the Tomorrow’s Materials residency organised by Space 10, she developed a method for making biodegradable packaging using a byproduct of corn — one of the most abundant and regenerative plant species in the country. Called Articles of Protection, the project was also rooted in the ancestral practices of Mexico’s rural and Indigenous communities.

To learn more about her fascinating work, we recently invited Taina to share her story as a speaker and exhibitor at a special edition of our WDCD Live event in Mexico City. For those who didn’t make it, we also brought Taina in for a conversation about her approach to materials, collaboration and circularity. You can read our interview below.

Hi Taina! We’d love to know a little bit about your background. Where did you grow up, and where does your fascination with materials and objects come from?

Hi! I’m Taina Campos! My name comes from the Indigenous prehispanic culture of the Antilles, the Tainos. But I am Mexican. I grew up in Mexico City with parents who are architects, so since I was a kid I grew a fascination for design. During my studies at the Industrial Design School at UNAM, I quickly understood that design was deeply involved in all kinds of environmental and social damages related to the climate crisis. That’s when I became interested in sustainability and circular design.

‘I’m passionate about circular materials, local materials, and their potential to lead the symbiotic change we need.’

After living abroad for some years and experiencing the European design scene, I came back to Mexico and realised that this country has enormous potential to be a leader of real sustainable change. So I focused my Master’s studies on setting the basis for sustainable design curricula for Mexico. Future studies and biodesign became a large part of my research. Then, during the pandemic, I conducted my first tests on bioplastics. And here I am now, almost three years later, still passionate about circular materials, local materials, and their potential to lead the symbiotic change we need as humans! 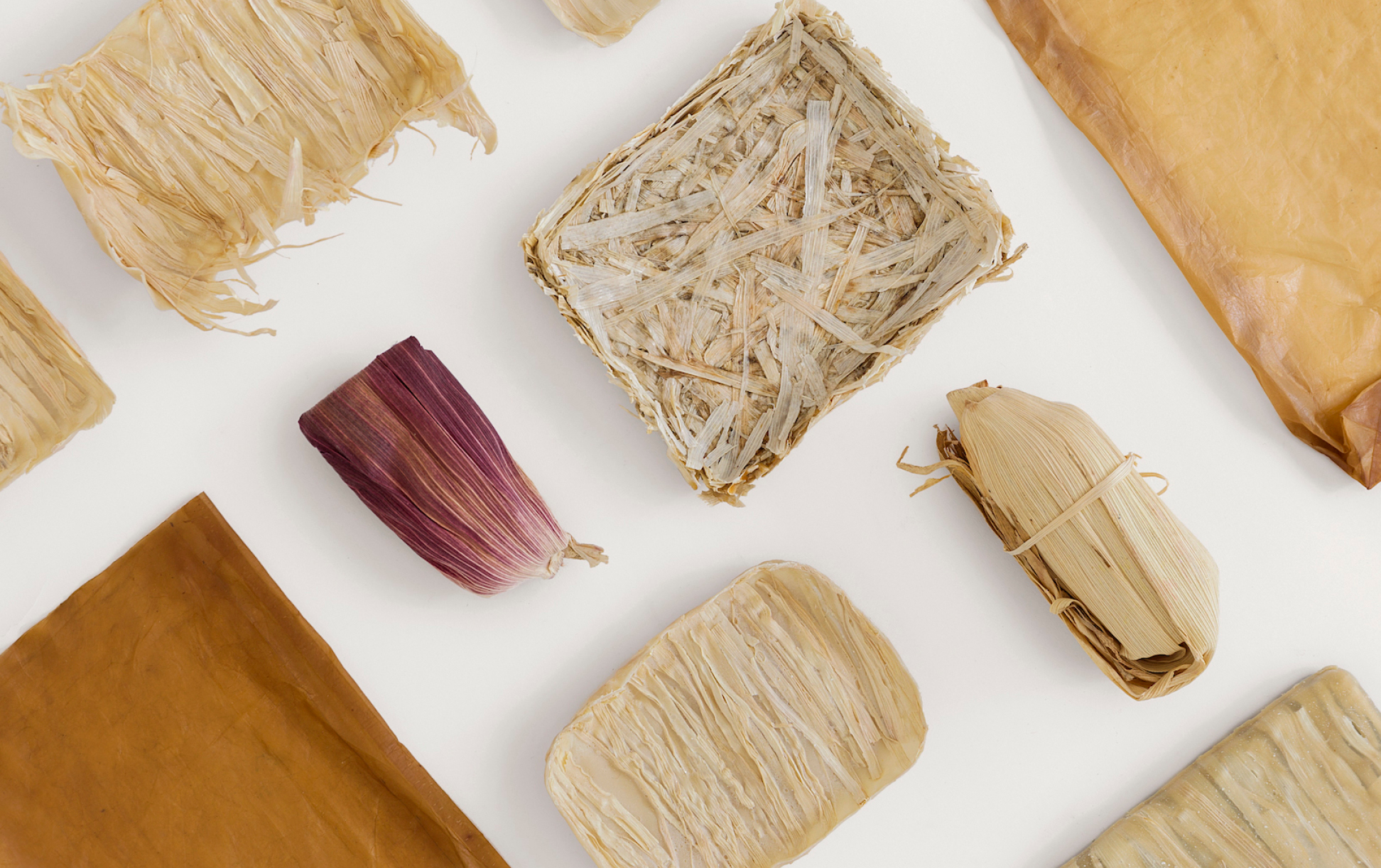 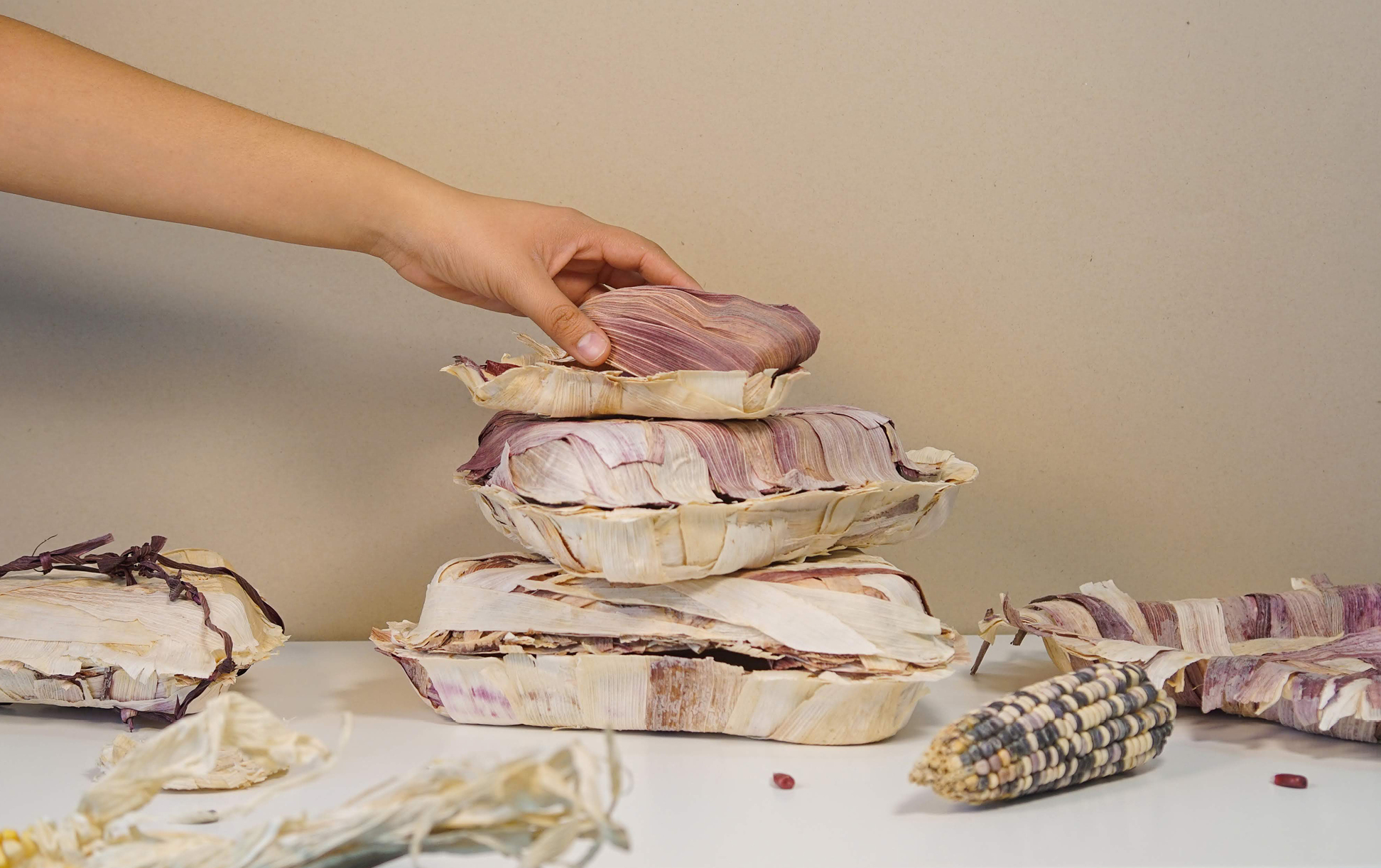 How would you describe the creative scene in Mexico City?

Mexico is a deep source of creative inspiration at all levels — the ancient cultural roots we have are still present in many of our forms, crafts, construction, dyes, languages, and ways of working, organising and relating to the earth.

As for Mexico City, the great chaos of the city gives the opportunity for all forms of creation, emerging cultures and hacks to take place. A city of almost 25 million habitants, settled on a lake, on top of what once was the greatest city of the prehispanic era: it’s a swarm of mixtures that allows everyone to be creative. But I would say the local scene is in danger due to the gringo “ex-pat” (or digital nomad) influx we’re facing at the moment. The ease by which our neighbours to the north are able to come and pay what they think are “cheap” rents in cash, while still earning in dollars, allows a kind of modern-colonisation and cultural extractivism that is making it very difficult for locals to keep up with the living costs while protecting the right to create.

‘Mexico’s ancient cultural roots are still present in many of our forms, crafts, constructions, dyes and languages.’

you describe yourself as an ‘ecofeminist activist’. What does this mean to you?

Ecofeminism for me is the conjunction of the environmental struggle and the feminist struggle. Both struggles are a defence for the right to life, a dignified life for all species and all genders, in harmony, equality, and freedom. Working with materials that come from our land, from our territory, that do not contaminate it, but on the contrary nourish it, is for me already working within ecofeminism. Additionally, collaborating with the women who work the land and sow it, so that they may defend their own right to live free of violence, is another way of bringing ecofeminism to my projects.

Here is a little poem I wrote for my Articles of Protection project that tries to express this in a better way:

Can you elaborate on the story behind your latest project, Articles of Protection?

It all started at Design Week Mexico 2021, when I got a grant from the US embassy in Mexico to produce a piece for the Inédito exhibition. I chose to collaborate with my friend, designer and material expert, Cointya Oviedo. We wanted to address the use of single-use plastic packaging at the informal food stalls that exist all around the city. We saw great potential in using the same waste from these stalls. In the end we decided to use the remains of tamales, which is one of the icons of street food in Mexico City, to come up with a biodegradable alternative.

For Articles of Protection, which was created during a residency organised by Space 10, I wanted to use corn from local producers to create the packaging. This way I could close the supply chain as locally as possible, achieving traceability of the raw material all the way to its roots and giving value to the native corn from Milpa Alta, which is currently being threatened by the rise of imports.  The final triangular shape we ended up with is inspired by itacate: a corn-based food from my father’s town, Tepoztalán. Coincidentally, itacate is also the same name that we give to the takeaway food containers that are typically given to the attendants of a party or reunion in Mexico. 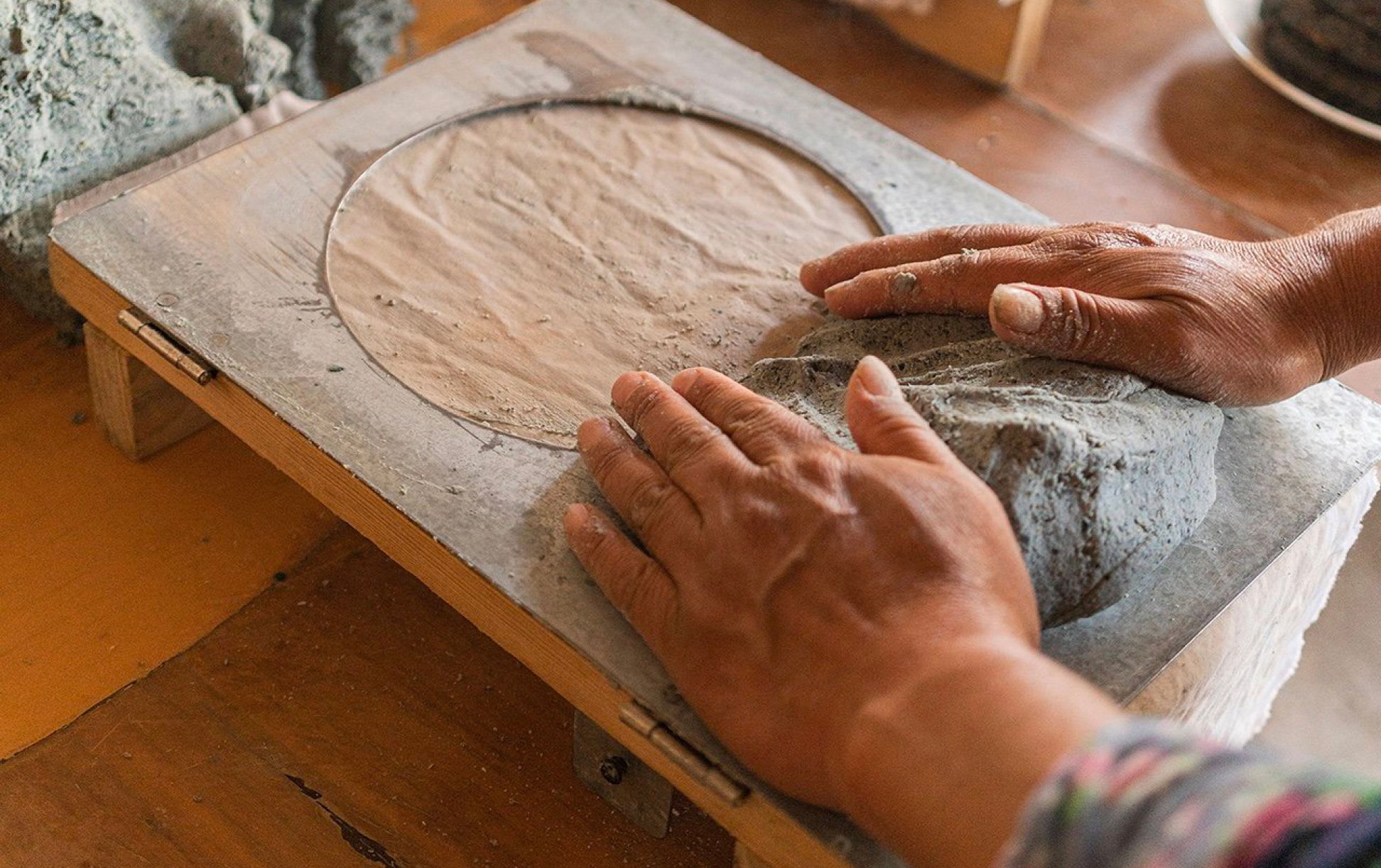 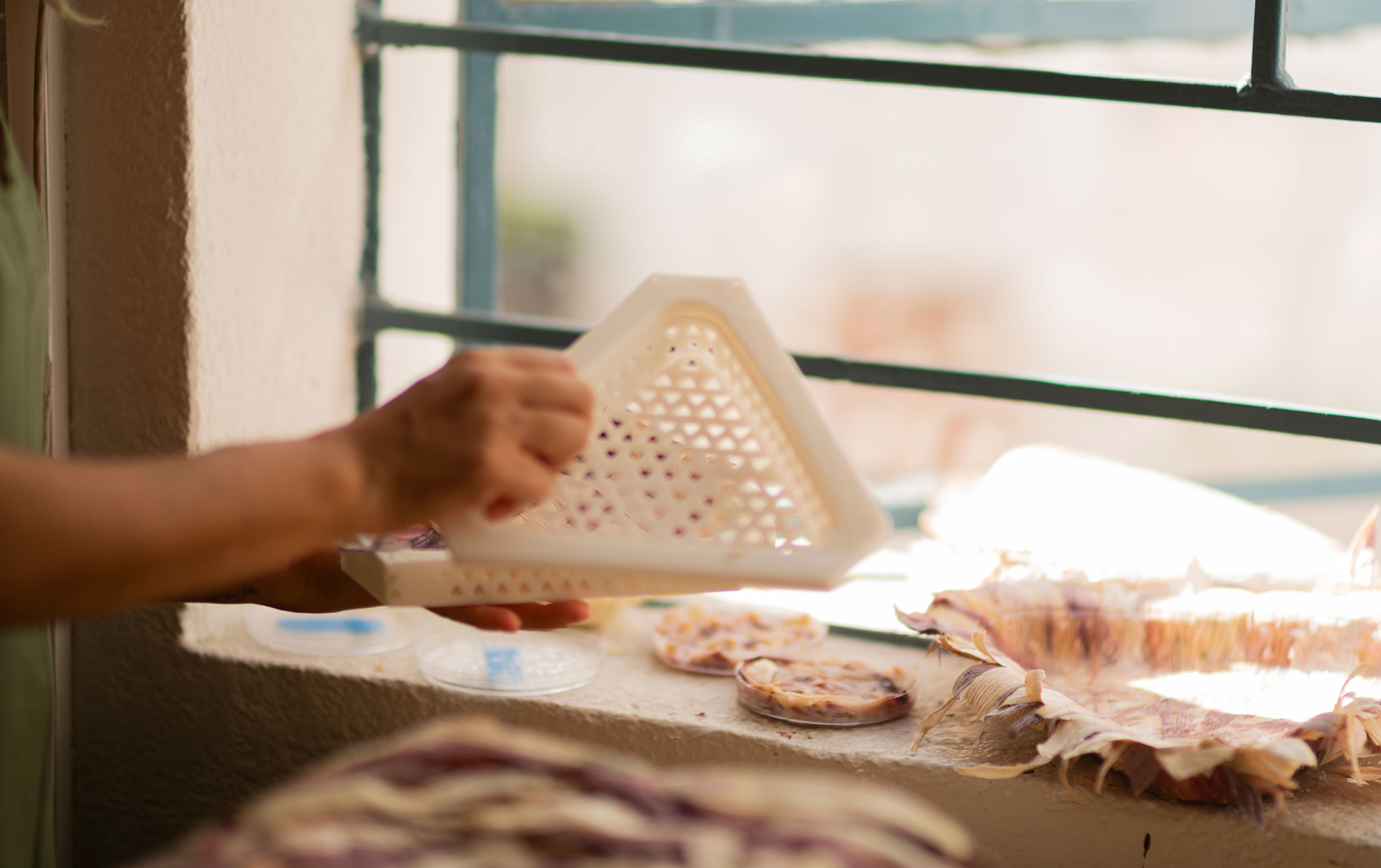 Who did you collaborate with on the project, and what was that experience like?

For the project, I collaborated with Mujeres de la Tierra, a group of women from Milpa Alta, a rural area southeast of Mexico City. After losing their jobs during the pandemic, and finding themselves facing domestic violence cases, these women decided to get organised and start selling corn-based food from their own milpa (a Mexican agro-ecological crop-growing system).

I got to know the project thanks to Contaminants Anonimus, my environmentalist group, and started to weave ties with them. These women are now my friends and sisters, who teach me a lot about sisterhood, food sovereignty, the defence of our territories, and how to love and care for the earth.

‘The truth is that we’re a very small group of people struggling to conduct our research at small scales, with little support from the industry and the government at large.’

What role do you think (or hope) biomaterials will play in the future of Mexican design?

It is hard to know. I like to think that material designers like me are leading a new era of changes in consumption habits, and questioning the design scene. But the truth is that we’re a very small group of people struggling to conduct our research at small scales, with little or no support from the industry and the government at large. But we’re connected, not only in Mexico, but in Latin America, and more people and students are getting interested in this field every year. So as long as we keep being as connected as mycelium, we’ll fructify as mushrooms!

When it comes to waste and pollution, what do you think are some of the biggest challenges facing the country?

There is a lot being done by social initiatives, including past WDCD Challenge winners like Ecolana, an initiative that helps people and industries to recycle, or Hagamos Composta, a pick-up service that collects organic waste to turn it into compost. But the truth is that even if there are some government initiatives to reduce and manage waste and pollution better, there are no education campaigns or big efforts to make it work. And it’s the same when it comes to our industries: there are few regulations that control them. 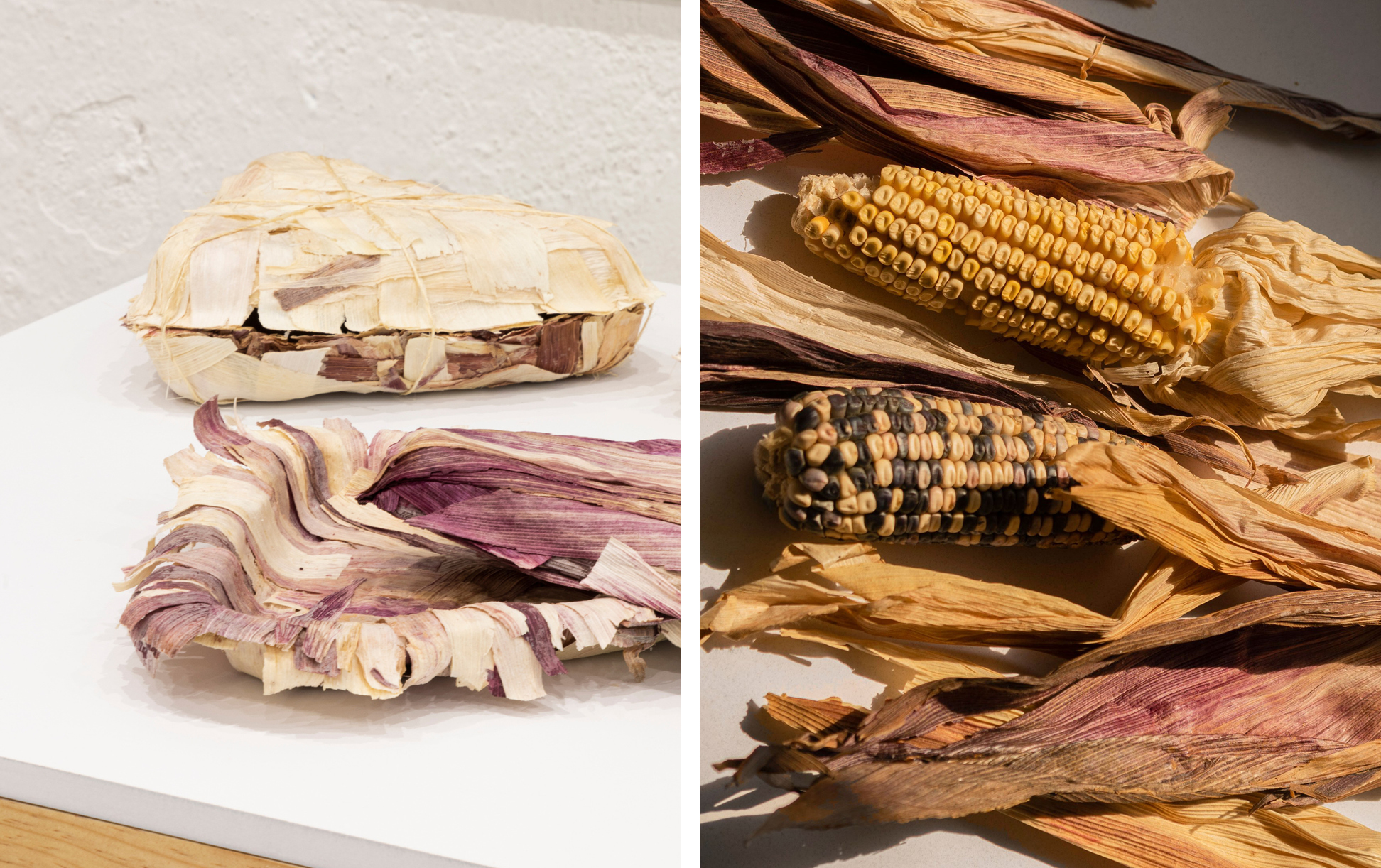 Articles of Protection (2022) by Taina Campos. Photos by Almendra Isabel.

Lastly, what advice would you give to creatives applying to the Make It Circular Challenge in Mexico? Any ideas you’d be excited to see?

See abundance where others see waste. Watch what’s going on around you — what local abundances can you discover? What technical or biological nutrients can you source locally? Are there any social struggles that you can see? What are people fighting for? Can your design address this issue? Who can you collaborate with? I want to see more collaborations, I want to see design bring us together as humans to protect the earth.

Presented by the Make it Circular Challenge, this article is part of a limited series exploring different perspectives on circularity from around the world. Read more on this topic here.