Raise Your CupHow are we solving the issue of waste during the festival season?

Nothing beats a weekend of great live music, food, drink, and sun. Except for one tiny catch: thousands of discarded cups, bottles, and rubbish littering the floor, creating excess plastic waste, carbon emissions, and, frankly, a very ugly sight to behold.

It’s predicted that by 2050 there will be more plastic in our oceans than fish. Single-use plastics such as bottles, cups, and straws have become synthetic villains, and there’s more pressure than ever for organisations to take this seriously. Looking at the evolution of the festival cup in particular, from recyclable soft plastic cups to hard plastic cups, compostable cups to steel cups, and cup holders to literal cup currencies, the subject is clearly a hot topic among creative minds.

Life in plastic, it’s not fantastic

We’ve come a long way from single-use recyclables, but let’s begin there. Here’s a quick guide that describes three bioplastics used by the events industry today. 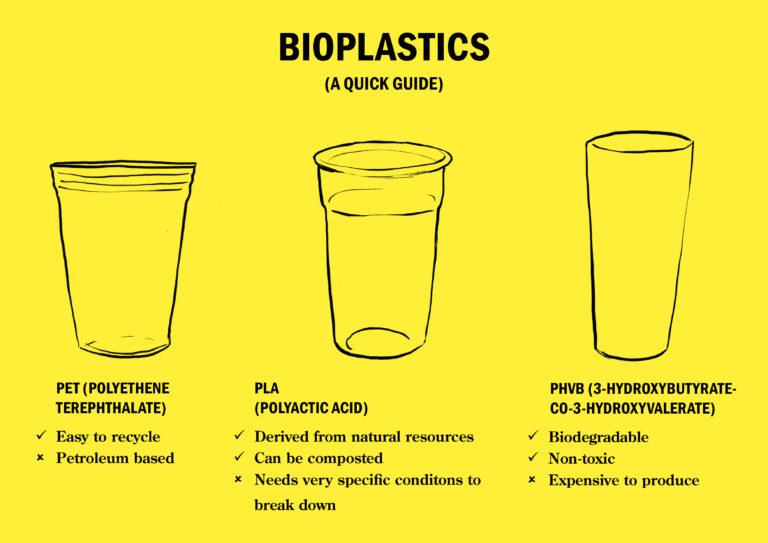 Mojo, a company that organises hundreds of festivals and concerts every year, has used PLA cups since 2004. For the past 15 years, they’ve been investigating how to handle PLA most effectively (composting, fermenting, or recycling), and have landed on what proves most successful: an on-site sorting plant. Rather than trying to source independent industrial composters, the company’s own plant uses a machine to sort the PLA from other waste, removing the dirt and grinding the cups down to be reused by external manufacturers. 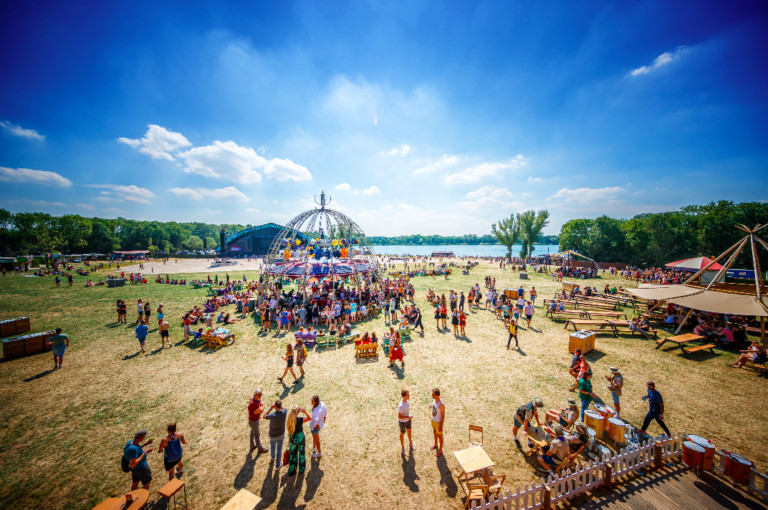 Lowlands Festival, one festival organised by MOJO that works with their PLA recycling system

Festivals get hammered a lot for their waste, but it’s no different to what’s happening outside. In a way, it’s a good thing because it’s spotlighting the problem.

THE VALUE OF FESTIVALS

Last year, Innofest, who use festivals to test new prototypes, tested a PHVB cup at Welcome to the Village Festival. Innofest founder and WDCD Live speaker Anna Van Nunen, centres her belief around the ability for festivals to incubate and test new ideas. In Van Nunen’s words, “This works because Innofest sees festivals as mini-societies, with their own energy grid, water infrastructure, waste, food, logistics and thousands of end users of innovation: the festival visitors”.

Melinda Watson of Raw Foundation, an organisation that works closely with festivals across the UK to reduce waste, shares a similar belief: “A festival is like a micro version of our own over-consumption society… unfortunately, festivals get hammered a lot for their waste, but it’s no different to what’s happening outside. In a way, it’s a good thing because it’s spotlighting the problem.” 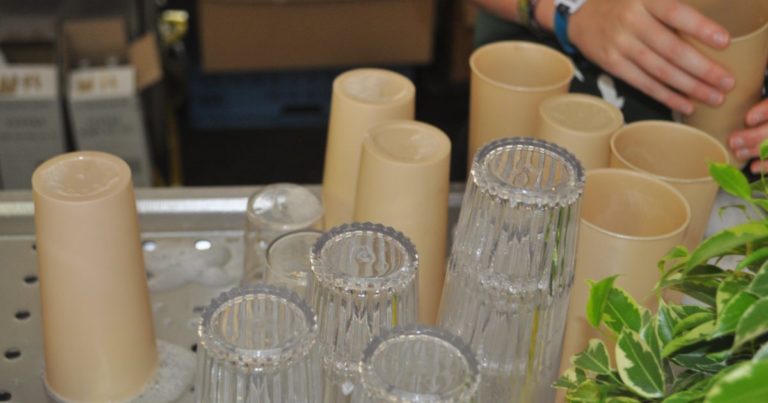 Biocas’ PHVB cups at Welcome to the Village Festival, 2018

PHVB, PET, and PLA plastic cups all have their benefits and downfalls, but one problem unifies them all: the actual act of littering itself. When users drop their cups or bottles, they automatically make the recycling process much more difficult. Cups that are dropped become impossible to sort, too dirty, and too damaged to be reused or recycled. So how can we convince guests to not litter in the first place?

A good example of this would be the “Never Give Up On Your Cup” campaign, created by Plastic Promise, a national platform aimed to reduce plastic use in the events industry. It’s a simple concept: remind people to keep their cups in hand until they’ve reached a recycling point, instead of just throwing it on the ground. Plastic Promise’s website offers a media kit download, which other organisations can use and disseminate to their own audiences with ease. Tag-lines such as ‘How would you feel when someone lets you down?’ aim to convince people their relationship with cups shouldn’t be so throwaway. So far, the campaign appears to be proving successful, Loveland 2019 being the first festival to implement the campaign. Loveland’s production manager Lisette Lagerweij, in conversation with Plastic Promise, recalled the campaign’s positive reception, highlighting comments such as “Yes, no more plastic soup!” or “How nice to dance on a clean festival site.” 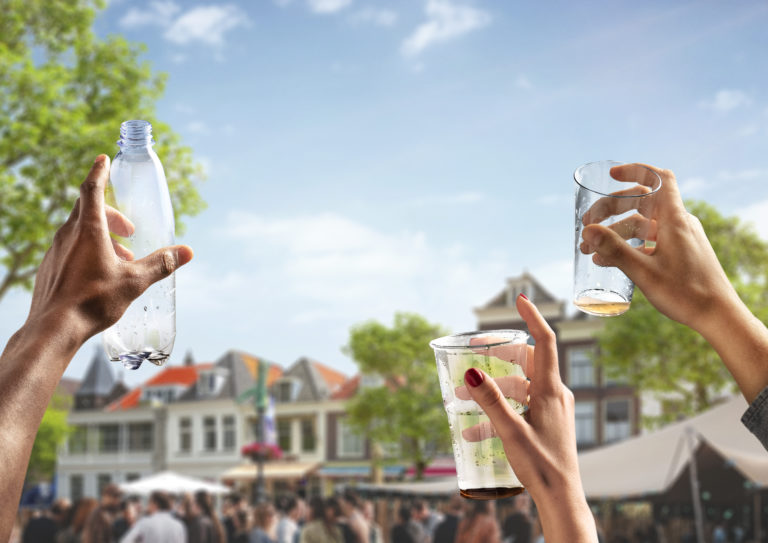 Let’s go one step further – what if we kept our cups all night long? That’s what the creators behind London’s first ‘ecodisco’, Tail & Twist, want to promote. Their revolutionary reusable cup and cup holder system tries to make the idea of discarding your cup completely unthinkable. From running small bar events back in 2016, to this year’s hit opening night that was featured on national news, Tail & Twist have swept into London’s night scene with no intentions of slowing down. We spoke to Hadi Ahmadzadeh, cofounder of Tail & Twist about the origins of the project. “Disco originated as a force that brought people together and promoted change. When looking at our dance floors at the end of events, we realised that although we were leaving people with joyous memories, we were also leaving behind an unforgivable mess… from there it became clear what kind of change our disco was going to promote.” 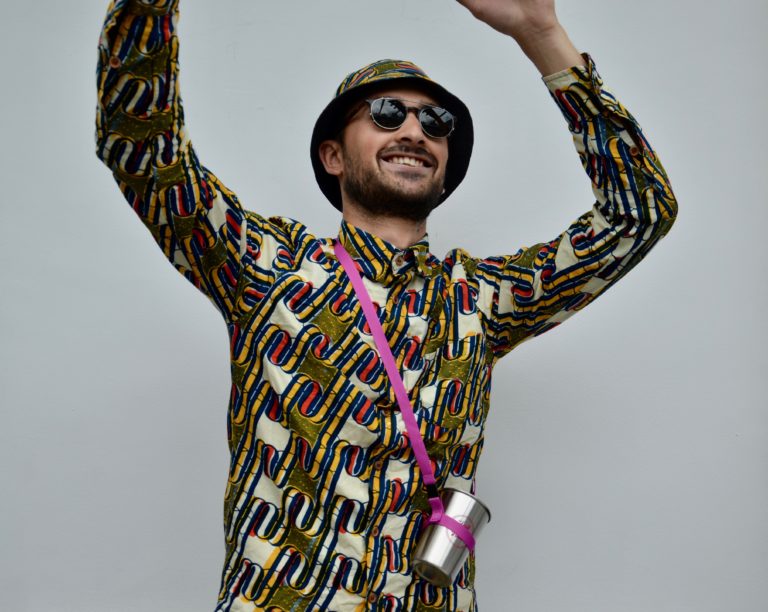 We realised that although we were leaving people with joyous memories, we were also leaving behind an unforgivable mess… from there it became clear what kind of change our disco was going to promote.

Like many others today, Tail & Twist started their journey with compostable cups but struggled without an external company to recycle them, and so moved to reusables. The decision to use steel over plastic has multiple benefits: steel is very easy to recycle, extremely strong, doesn’t hold on to bacteria in the same way plastic does, and far fewer harmful chemicals are involved in production. “Just as important is the unique look, feel and design of both cup and holder” says Ahmadzadeh, “[this] motivates people to want to take care of their cup, and take ownership of it for the night”. Tail & Twist charge a £2 deposit for the cup and cup holder which can be worn on the body. Ahmadzadeh reported an extremely positive response to this system, with only 10% of the cups sold ending up in the ‘dirties’ box behind the bar. “This means the vast majority of people chose to reuse their cups rather than requesting new ones, and whilst this is not a flawless way to measure the system, some will have been lost around the venue for example, it shows that most people bought in to what we are trying to do”. Thanks to guests not requesting new cups – they only need to be washed once, which dramatically lowers the carbon footprint.

Although the system isn’t perfect (yet!), it’s certainly making a huge step forward in pushing the industry towards more future-proof solutions. Tail & Twist have just announced their next event in support of the Global Climate Strike and hope to make the event an official Climate Strike Afterparty. They’ve also teamed up with Worldrise, a non-profit organisation tackling plastic pollution, and continue to work with Oval Space, who aim to become the first zero plastic event space in London. Keep an eye out for future events listed here! 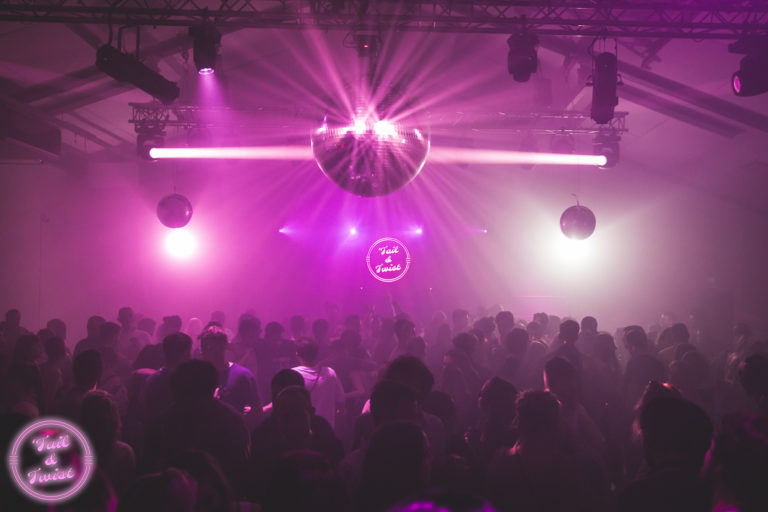 So, you’ve got your cup. It’s sleek, strong, safe and ecologically produced. Maybe you’ve got a jazzy holder to go with it, and you’re set to hit the dance floor. What if you could now pay with your cup?

Last year, Gemeente Amsterdam, the French-Dutch network Nuffic, and the French Institute in the Netherlands teamed up with What Design Can Do in a Creathon in Amsterdam for students to work together on creative solutions to waste management. From this workshop, one group came up with a revolutionary idea to tackle plastic waste at venues such as Amsterdam’s much loved Paradiso. Named reCup, the group proposed a cup that, via an app, could store money and pay for drinks, using a barcode on the bottom. This not only makes the process of ordering drinks much quicker, but also provides a concrete motive for users not to drop or discard their cups. The app then tracks all spending history and even asks at the end of an event whether you’d like to donate the remaining money to a charity of your choice – talk about something to cheers to! 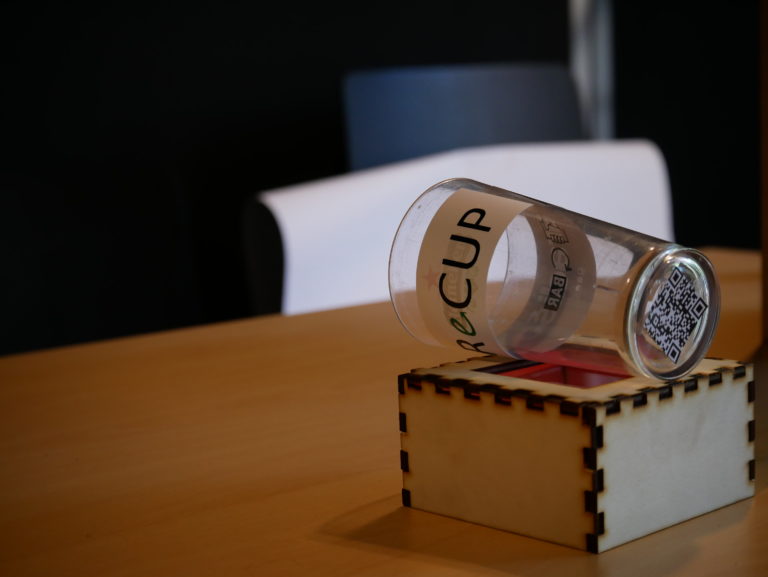 Model of reCup, produced for the Creathon 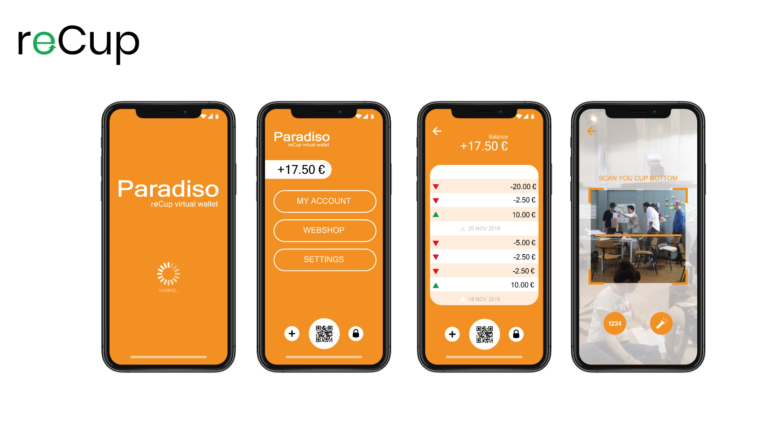 Prototype of the reCup app, produced for the Creathon

Even when it comes to something as simple and mundane as the cup, there is clearly no limit to how far we can push our expectations of everyday objects. To engineer such a change in perspective is a shared responsibility, so next time you’re out enjoying the sun, or dancing away into the early hours, remember to check what recycling systems are around, raise your cup, and most importantly – don’t let it drop!