The world is only too familiar with the global menace of plastic pollution. According to the United Nations, we throw away a staggering 300 million tonnes of the stuff each year — nearly equivalent to the weight of  the entire human population. The links between plastic pollution and climate change have also been well proven, with plastic contributing both to GHG emissions and climate change exacerbating its spread into the environment.

From our home in East Africa, we have made some great steps towards progress, particularly with  regards to plastic bag bans (most notably Rwanda in 2004, Kenya in 2017 and Tanzania in 2019). We even had some welcome news this year of a resolution towards a Globally Binding Plastics Treaty which was made during a UN meeting in Nairobi last March. But despite these legislative moves, plastic continues to choke our beaches, trenches and waterways. Without proper waste management systems and proper legislative implementation, plastic is still being burnt or dumped in massive volumes, posing significant health hazards and eventually finding its way to the ocean. 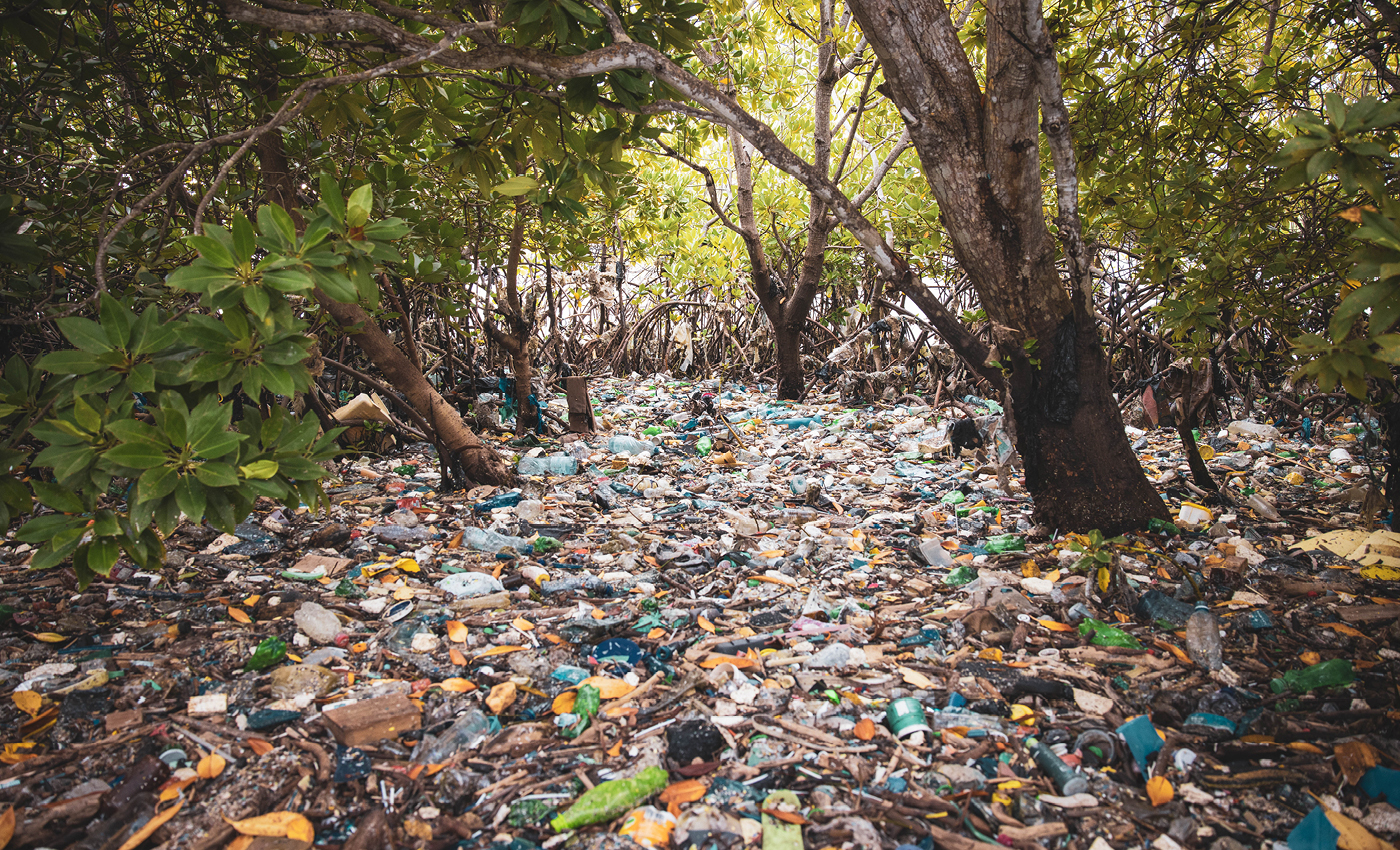 Whilst tight regulation and legislation can go a long way, as always in politics, there is often too much talk and not enough action. Without proper infrastructure, communities are often forced to take matters into their own hands. In Kenya, we are seeing more and more entrepreneurs, creatives  and community-based organisations taking on the issue. The Flipflopi Project is one such initiative, and it’s our belief that galvanising action at a local level — through understanding local issues and finding local creative solutions — is the key to rapid progress. By focussing on what plastic pollution and climate change means for the lives of specific places and people, we can unlock the potential of community-led action, triggering a growing wave of change.

The Flipflopi Project in Kenya: an African solution to a global problem

This was the starting point of the Flipflopi Project: to engage East Africans with the issue of plastic pollution in a way that is meaningful to them and their specific context. The image of a turtle with a plastic bag in its mouth may shock some people in the West, for example, but won’t engage a young Kenyan living inland who doesn’t know the coast and has more immediate concerns.

This sense of immediacy is present in all of our campaigns and activities. Flipflopi is the world’s first 100% recycled plastic dhow made from 7 tonnes of trash — including 30,000 washed up flip-flops — that we collected from towns and beaches across Kenya. Dhows are a pillar of Swahili culture, and well recognised in this part of the world. The old toothbrushes and colourful jerry cans crushed and melted down to make this sailboat show people what circular economy principles can look like in practice. We constructed the boat with traditional dhow-builders on a beach in Lamu, to demonstrate that plastic waste is valuable and can be recycled in a way that is scalable by local communities. 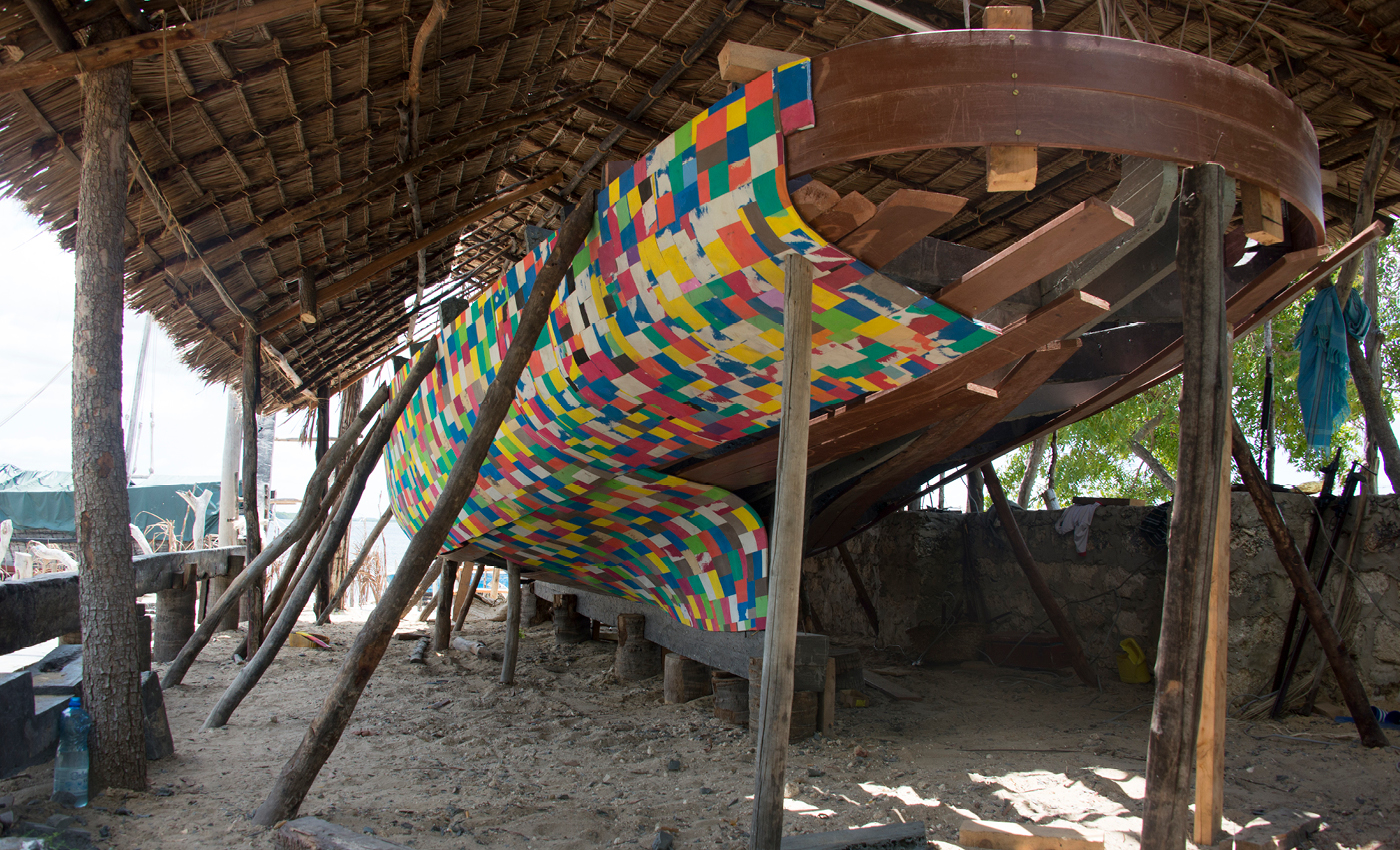 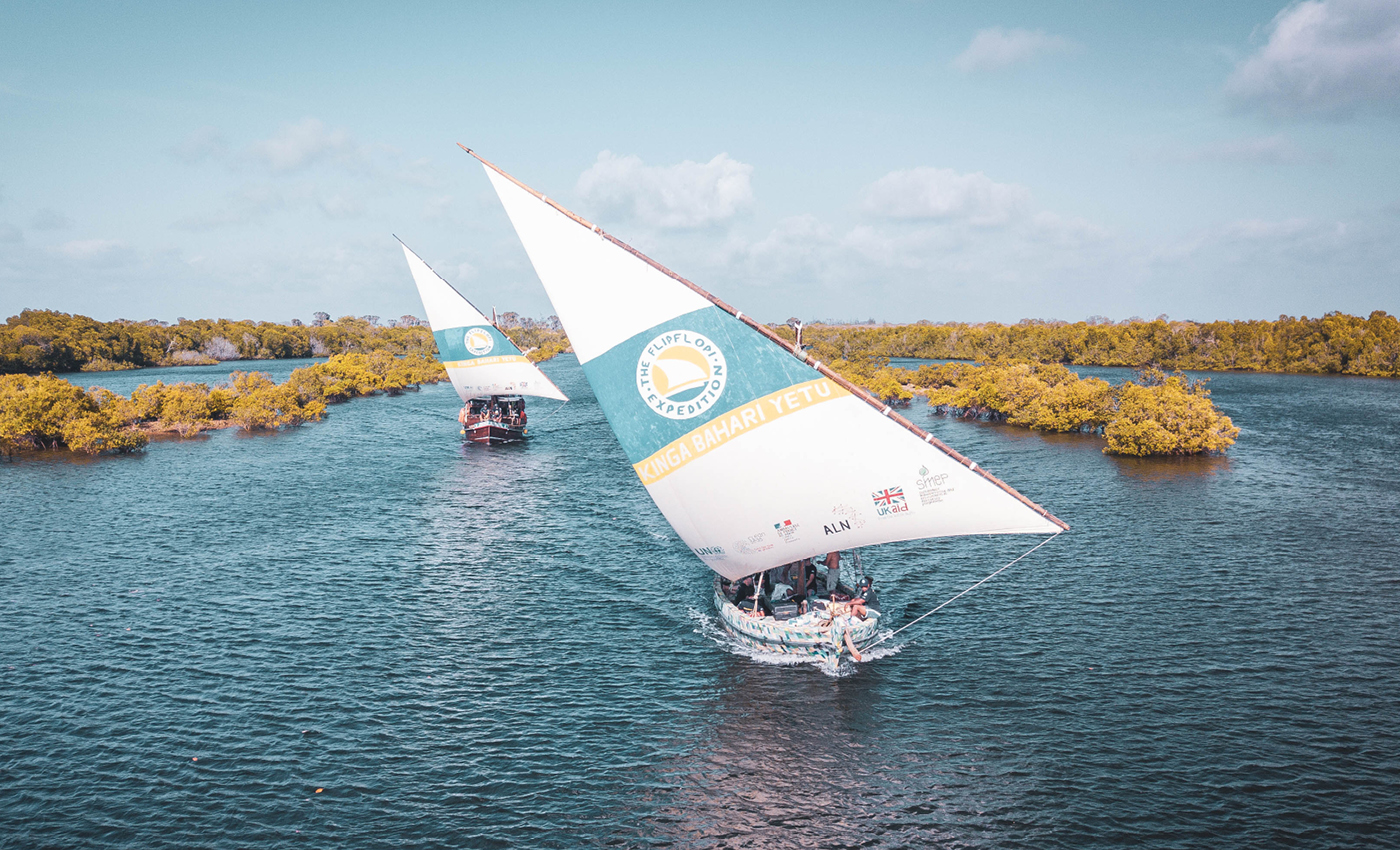 Flipflopi boat under construction and sailing on expedition, 2022.

Creative campaigning with a smile

Over the past few years, we have sailed Flipflopi up and down the East African coast and around Lake Victoria, the devastated lake that is also the continent’s largest, to inspire and mobilise a network of  like-minded communities. By bringing together artists, environmentalists, schoolchildren, media professionals, business leaders  and policymakers, and sharing ideas between different lake and ocean-dwelling communities, campaigns like these are helping to raise awareness about the impact of single-use plastics, and how they can be given a second life in a way that brings value to society.

One of the key things about Flipflopi is that as a true ‘artivist’ project, she makes people smile. A multi-coloured boat made of flip-flops is a conversation starter, no matter who you are. The result so far is that 890 million people have seen our message through our media campaigns, with 20,000 community members from Kenya, Tanzania and Uganda having participated in Flipflopi events.

And as we sailed, we also established a network of like-minded  ‘plastic revolutionaries’ in the region. This includes pioneers like Wekesa Zablon, who is the founder of Circular Design Nairobi and who will be attending COP27 this November as part of the Creative Climate Collective. It also includes grassroots projects outside of Kenya, like Plastik Talks in Uganda.

In the streets of Kampala, on the banks of Lake Victoria, solving the climate crisis is far from many people’s minds. There is extremely high unemployment amongst young graduates who are increasingly disillusioned by society; and fishermen and traders are struggling to make ends meet as fish stocks have been devastated by rising temperatures and pollution. To gain traction here, Plastik Talks is tapping into the visual arts to mobilise local neighbourhoods. As an activist and visual artist, Arinitwe Peters founded Plastik Talks to use art to capture the hearts and minds of Ugandans from all walks of life. They create recycled waste installations in the middle of bustling markets, leave striking murals in school grounds, build community toilets from plastic bottles, and are establishing an educational and waste sorting centre to provide a positive communal space for their neighbourhood. The initiative employs volunteers who are all graduates putting their skills to good  use — from artists to engineers and teachers. By leaving a visual and physical mark wherever they go, Plastik Talks hopes to ‘jolt people’s minds, trigger conversations and inspire them to engage with the local waste management scheme.’ 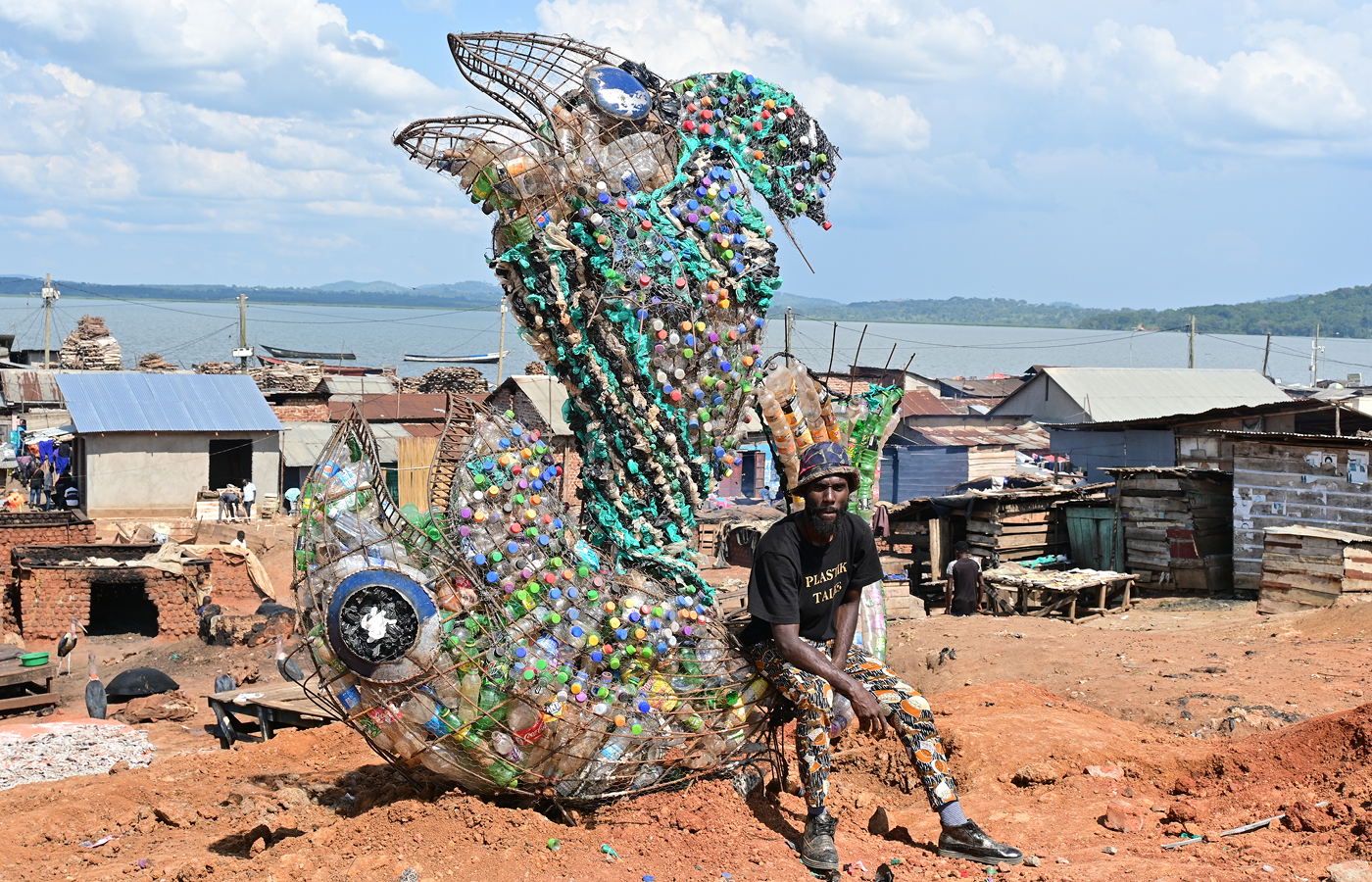 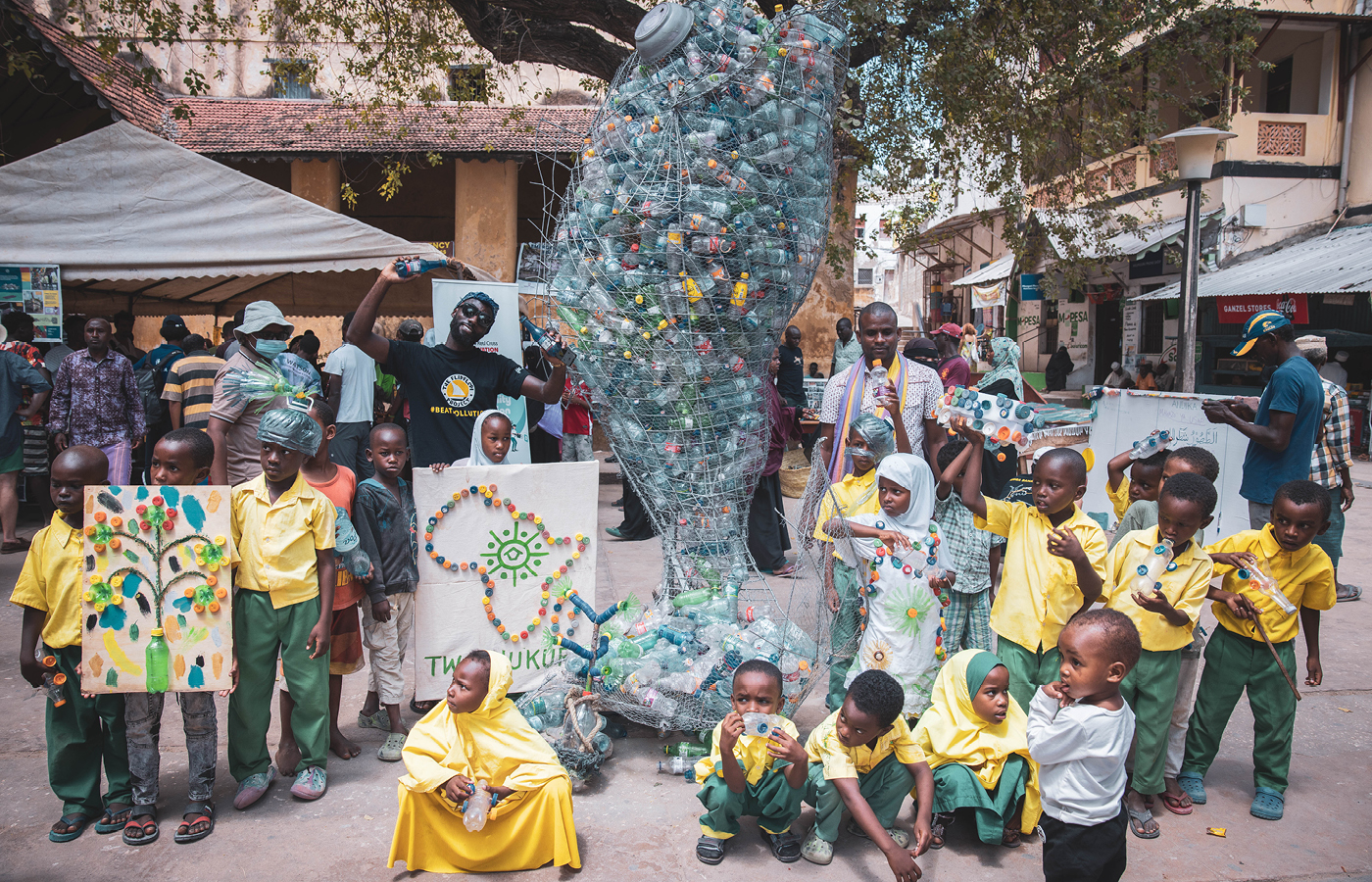 Plastik Talks installations and community mobilising efforts in 2021 and 2022.

Closing the loop through heritage boat-building

In Flipflopi’s home of Lamu, Kenya, there is currently only one waste disposal site to cater for a population of  30,000 people. While community members have started to tackle the issue themselves, they have limited capacity and funding. Seeing this, it became our aim to create a locally-led waste management system that incentivises communities to collect plastic, and creates a market economy for the island, based on Flipflopi’s own experience of plastic boat-building. Since then, we have managed to open a closed-loop material recovery centre in Lamu (the first-of-its kind in this part of the world) allowing local designers to engineer marketable products from waste, including new plastic sailing vessels and construction materials.

Together, our aim is to collect and transform approximately 15 tonnes of plastic a month. By creating a value for waste plastic in the region for the first time, we are generating a new source of income for the community, and creating a deeper engagement with the issue of plastic pollution. All this is being done in a challenging, remote location in the Western Indian ocean. If it can be done here, it can truly be done anywhere!

All the work we do at Flipflopi and with community partners like Plastik Talks have shown us that plastic pollution needs social as well as environmental and economic solutions. Often this begins by putting communities first, and giving people the tools to learn about, campaign and manage waste within a locally relevant context. And it is this spirit that’s driving the  ‘African plastic revolution’ today. 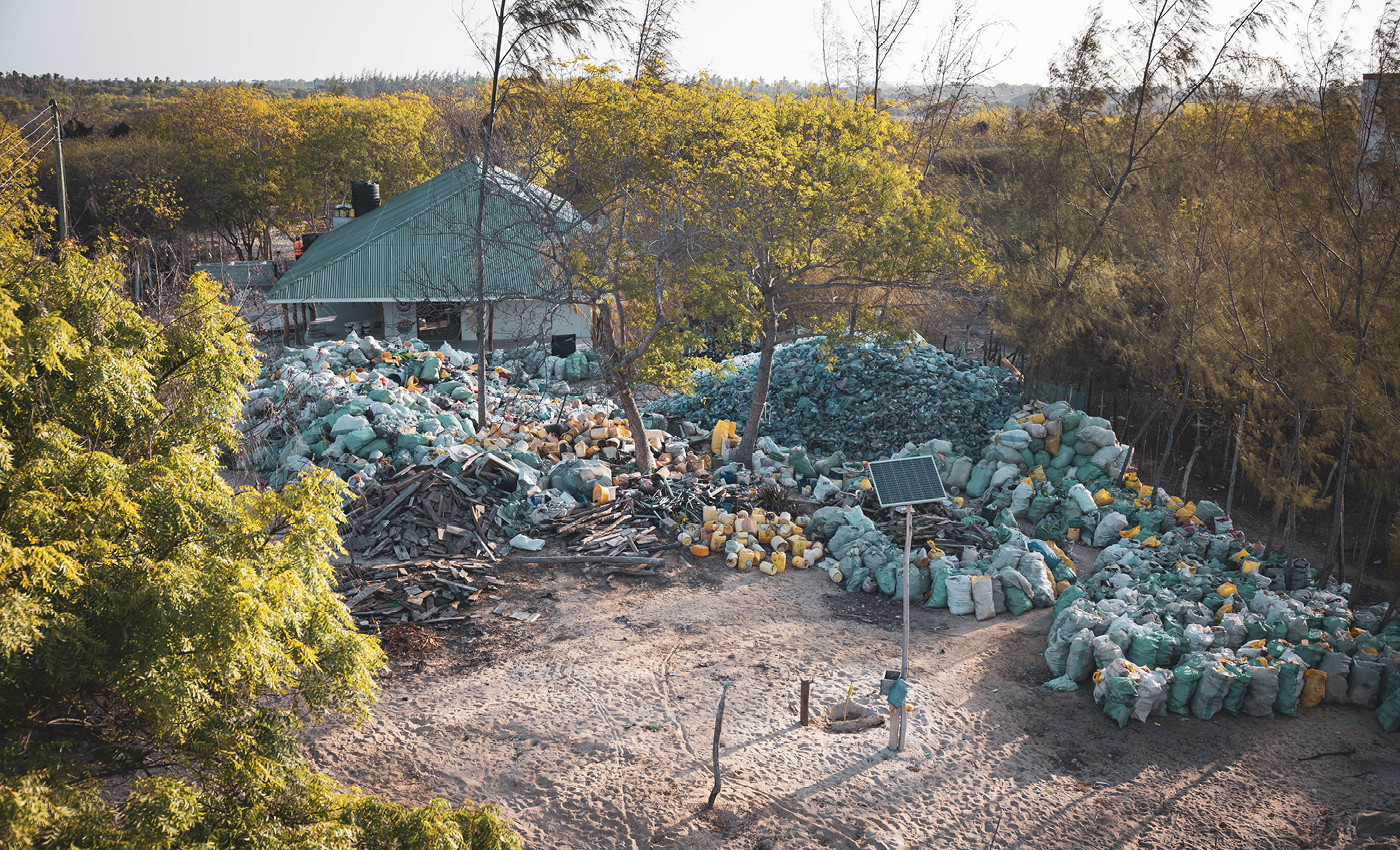 The material recovery centre in Lamu, 2022. All images courtesy of the Flipflopi Project and Plastik Talks.

Arinitwe Peter is a contemporary Ugandan visual artist using art to communicate issues that are detrimental to the development and progress of African people. His work focuses on key themes including female rights, the destruction of our planet, and the division between African politicians and the people they serve. More recently, Arinitwe set up Plastik Talks, a community-based organisation in Kampala, that is using visual arts to engage the youth in Uganda to fight for their environment.

Rebecca Faber is head of communications for The Flipflopi Project, Kenya. The goal of this initiative is to mobilise East African communities, raising awareness of plastic pollution and inspiring new circular economy solutions to the problem. Following the success of their expeditions at convening media, policy-makers and communities, Flipflopi have now turned their attention to closing the loop on waste plastics, through a material recovery and plastic boat-building centre in Lamu, a remote island archipelago in Northern Kenya.