At first glance, you’d be forgiven for thinking that the Rewilding Rave campaign belonged to the newest music festival in London. In fact, Rewilding Rave is the latest collaboration between Fieldwork Facility and the Climate Emergency Department of Hammersmith & Fulham Council. The project was launched this summer as part of a borough-wide effort to increase the volume of green and wet spaces in the city. Using clever copy and tongue-in-cheek design, the campaign invites local residents to pick up a trowel and get reacquainted with nature.

The concept of rewilding is not necessarily a new one, but it is one that has recently captured the attention of climate activists and creatives everywhere. Essentially, the practice is all about creating the conditions needed for natural ecosystems to thrive, repair and regenerate itself. Usually it involves conservation efforts aimed at restoring habitats, bringing back missing species, or creating wildlife-friendly gardens. In the UK, which has lost nearly half of its biodiversity since the industrial revolution, rewilding has all but solidified into a movement, energised by high-profile projects like Daisy Ginsberg’s pollinator park in Cornwall. 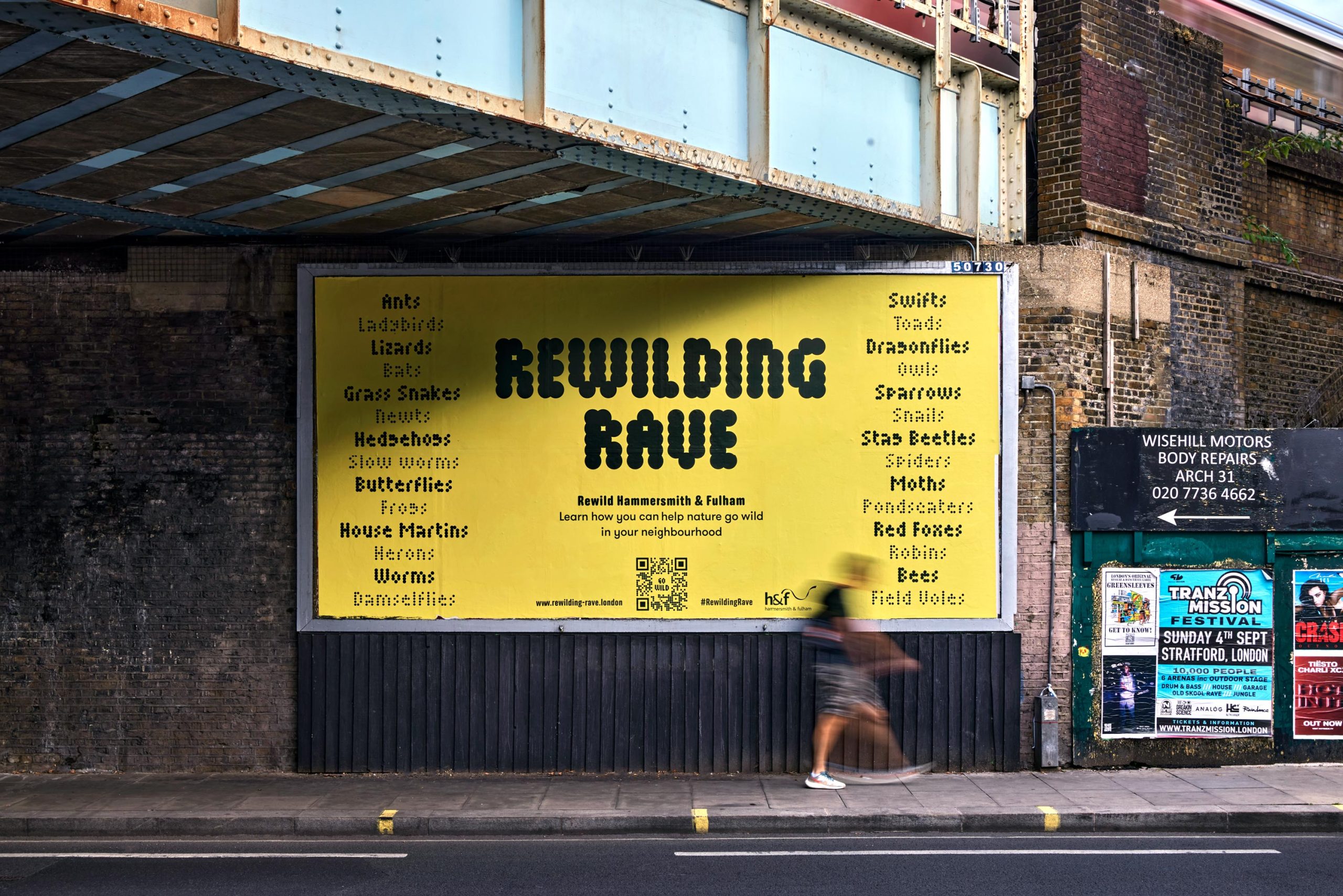 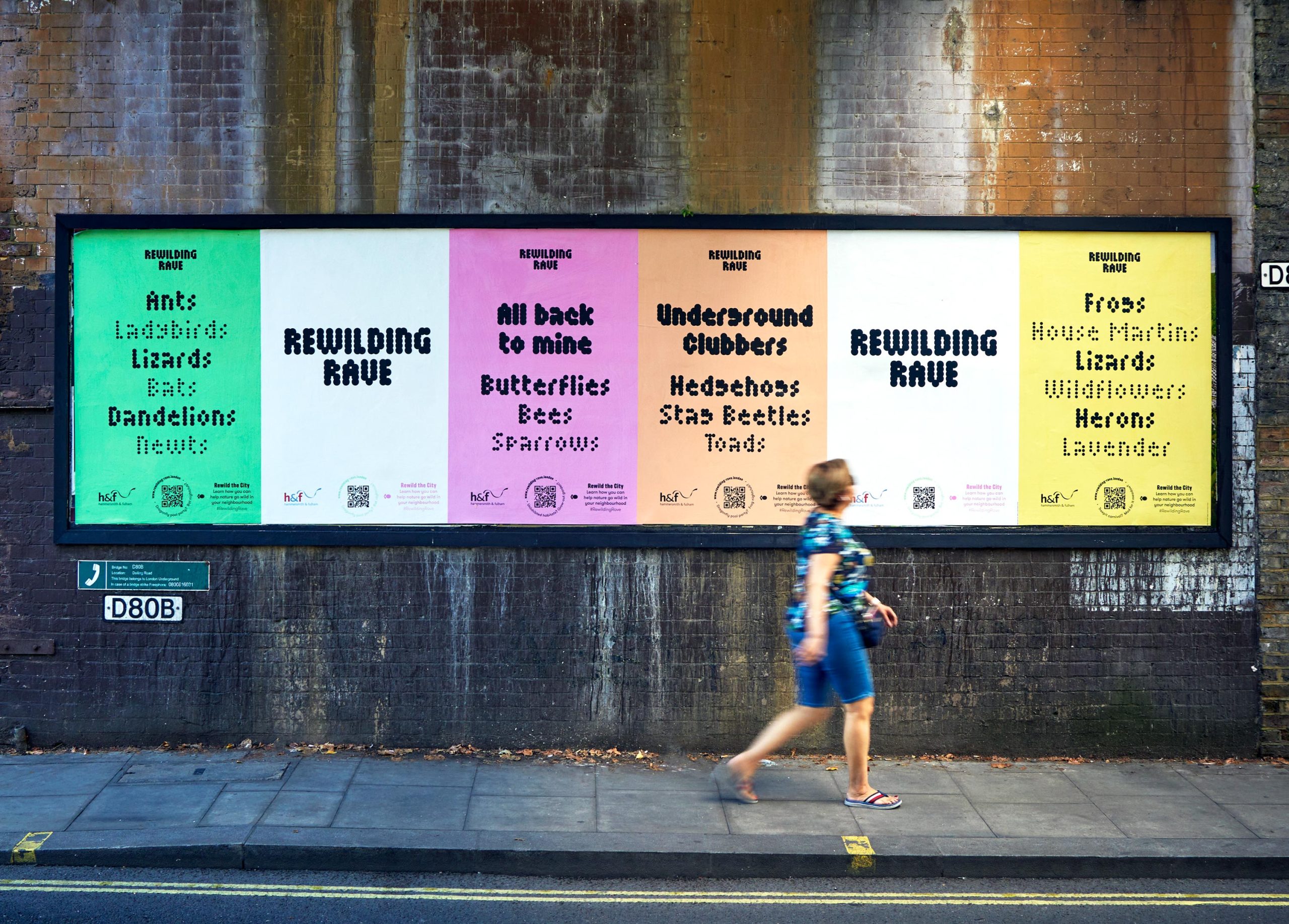 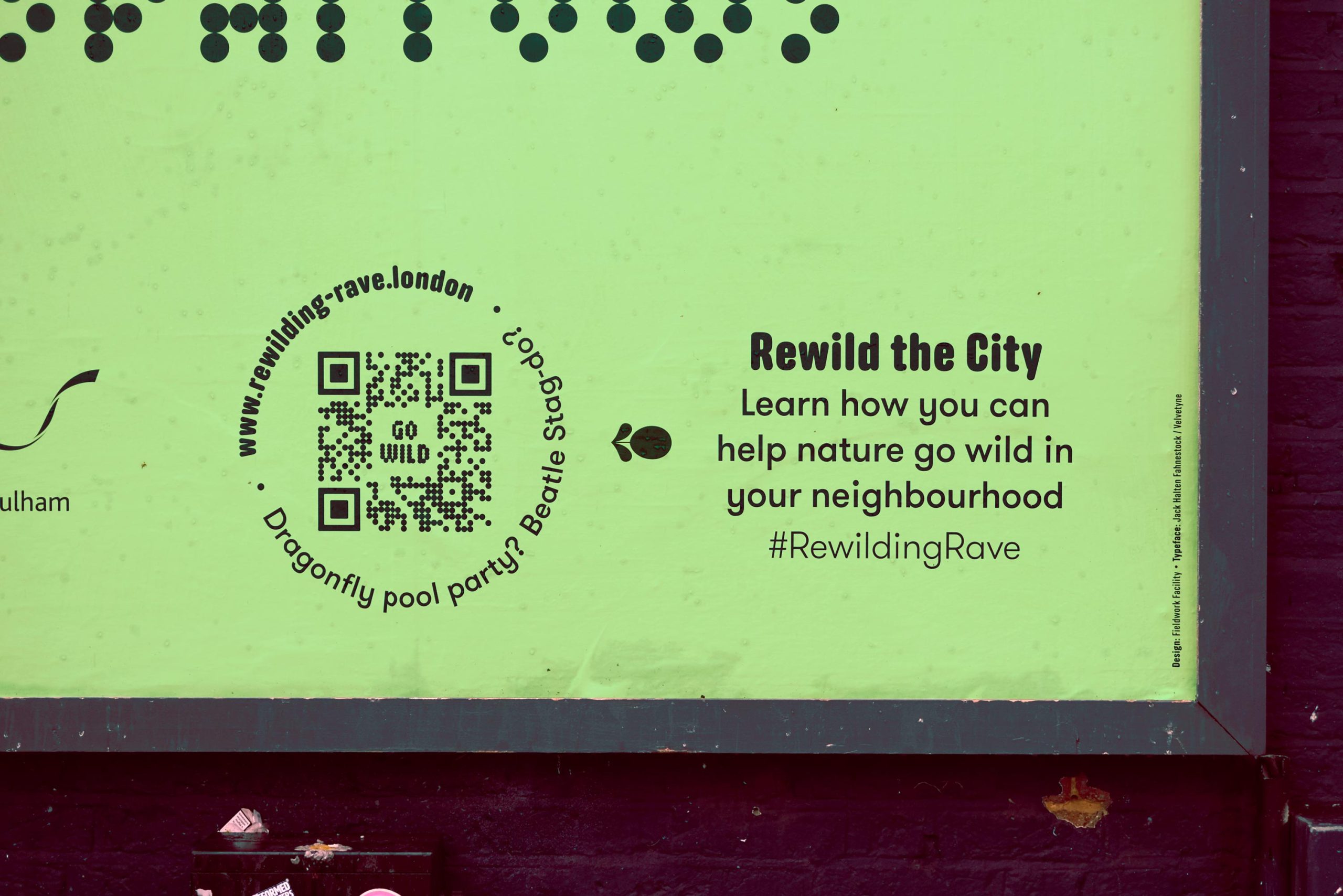 Poised to strike while the iron is hot, Rewilding Rave specifically targets young urbanites who may be less familiar with the practice. ‘We wanted to avoid the typical doom-laden messaging around the climate emergency,’ explains Robin Howie, the creative director behind the project. ‘Instead, we wanted to encourage people to feel great about participating in their neighbourhoods becoming greener and wilder places to live and work.’ This feel-good spirit is the running theme throughout the entire campaign, which includes print posters, picket signs and a hundred ‘bee hotels’ scattered around the borough. These interventions drew attention to small habitat details and encouraged bypassers to make little changes at home to support various native species that could do with a little leg up.

Rewilding Rave also used hyperlocal social media ads to highlight tips and resources based on the ecological needs and opportunities of specific areas. For example, parts of Hammersmith & Fulham are currently lacking naturally occurring wet spaces. However, the few ponds it does have are really thriving. In an effort to connect them, the project team triangulated the most important ponds  and targeted nearby garden owners, encouraging them to add a mini pool party for frogs, dragonflies and newts. All of these activities led to a council webpage which offers other practical tips on how to get involved, from depaving your front yard, to adopting a local tree or planting a wildflower habitat on your windowsill.

In terms of visual language, Robin notes that the design borrows deliberately from the world of music. ‘Our approach was driven by the influx of younger generations finding joy in gardening throughout the pandemic and a recent study that discovered music fans are much more likely to make climate-based lifestyle changes than non-music fans.’ The resulting combination of club aesthetics and environmental messaging feels fresh and necessary in a time of unprecedented climate anxiety. If nothing else, Rewilding Rave shows us that there’s a lot to be won in how we design and dress our calls-to-action. 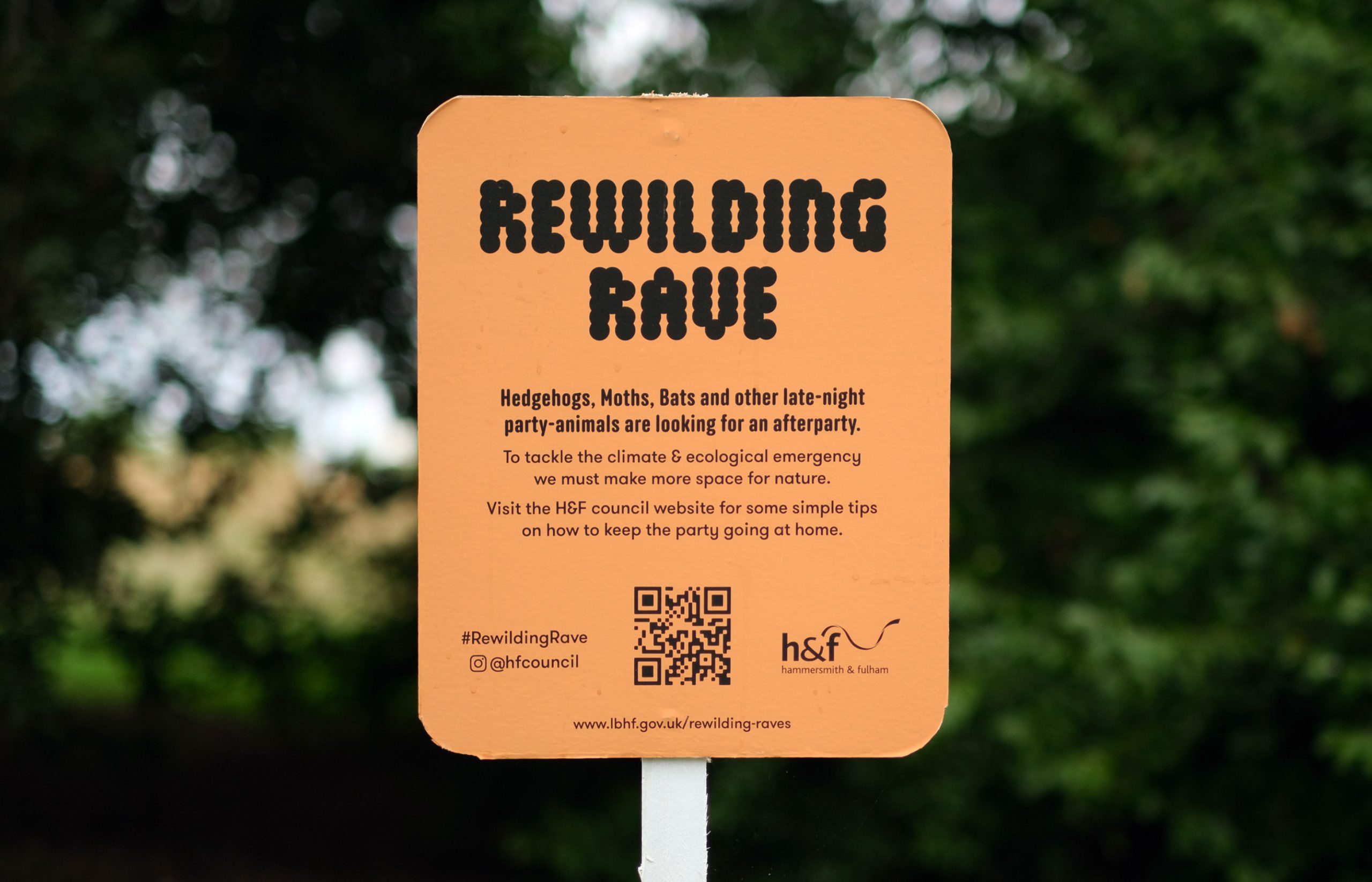 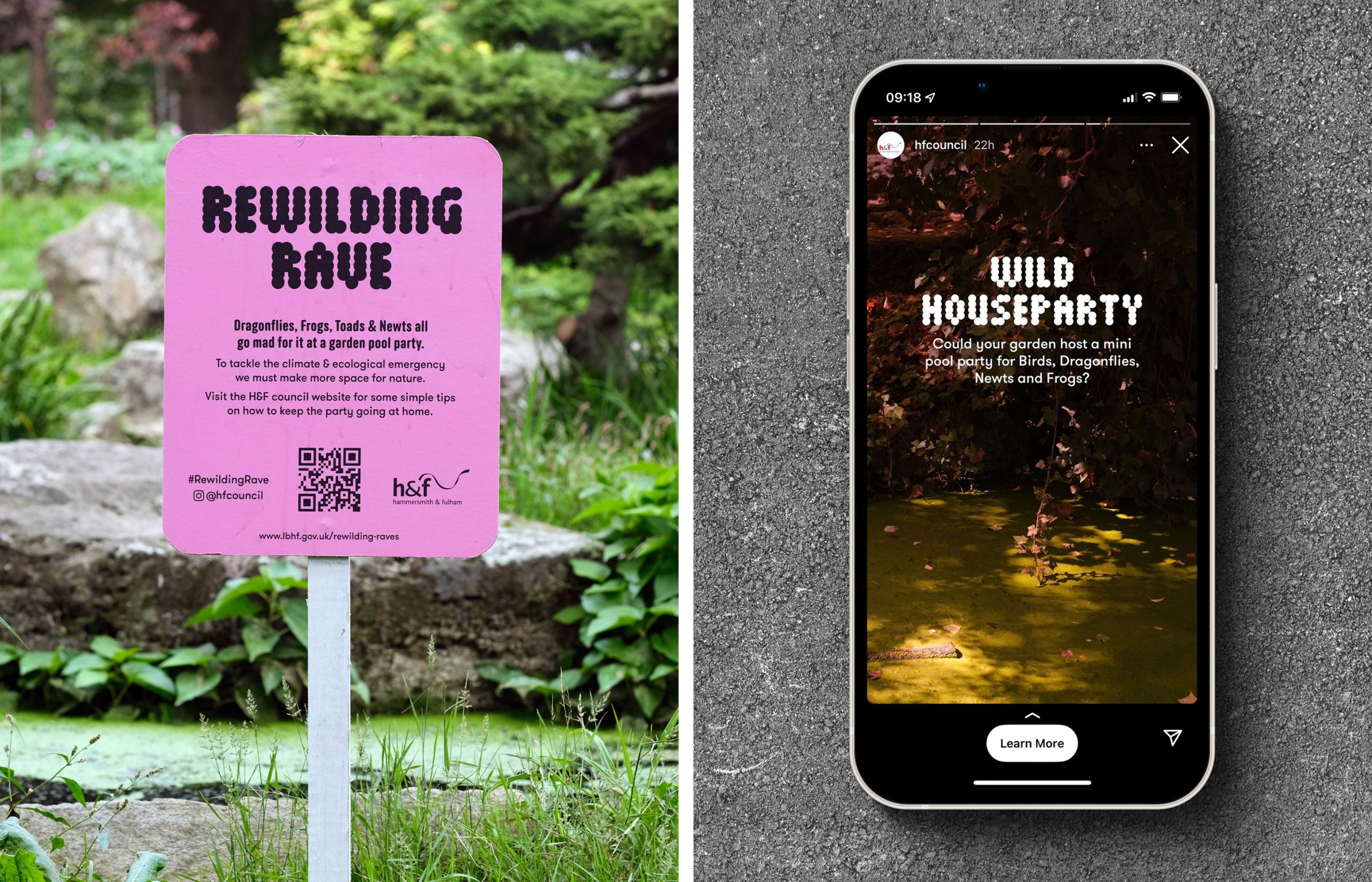 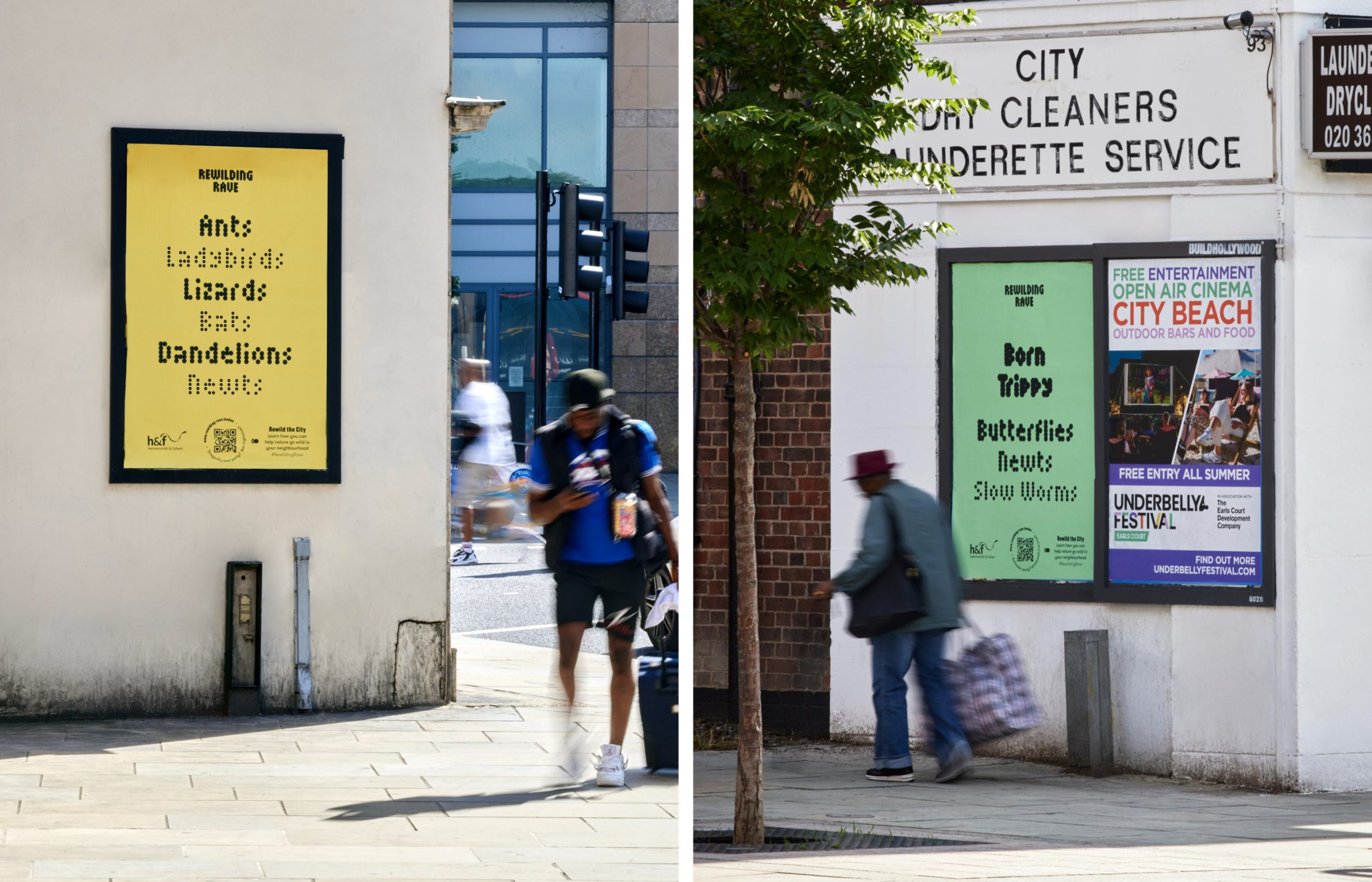 All photos courtesy of Fieldwork Facility.