‘I wanted to make an artwork for pollinators, not about them’Alexandra Daisy Ginsberg unveils new garden designed for bees and butterflies

Deep in the English countryside, work is finally complete on the planting of a new and rather unusual garden. As its name suggests, Pollinator Pathmaker is a living artwork that has been designed for a more-than-human audience. Every flower and shrub in the artwork has been selected, planted and optimised for the tastes of pollinating insects, using a unique algorithm developed by a team of horticulturists, scientists and machine-learning experts.

Commissioned by the Eden Project in Cornwall, Pollinator Pathmaker is the brainchild of multidisciplinary artist Dr Alexandra Daisy Ginsberg. The former WDCD speaker is known for creating artworks that examine our fraught relationships with nature and technology. Her experiments touch on subjects as diverse as artificial intelligence, synthetic biology, conservation, and evolution. In line with Ginsberg’s practice, the garden uses technology to invite empathy between species, and raise awareness about the vital role of bees in sustaining our ecosystems. Ahead of the public launch of the project, we caught up with Ginsberg over email for a fascinating conversation about the vision behind Pollinator Pathmaker, which is anticipated to be in full bloom by Spring 2022.

Congratulations on the first Pollinator garden! Take us back to the beginning — how did you first become involved with the project?

After a year and a half of collaborating in the virtual world, we unloaded thousands of plants at Eden this past September. It was brilliant to see so many different species of pollinators feeding on them before we even got the plants in the ground!

The work began before the pandemic when I was shortlisted for Eden’s new pollinator commission, part of a larger programme called Create A Buzz funded by the Garfield Weston Foundation to bring attention to the jeopardy facing native pollinators. We rely on pollinators — the bees, wasps, moths, butterflies, and more that enable many plants to reproduce — but their numbers are in alarming decline because of human actions. Instead of bringing attention to pollinators by making something about them, I suggested making an artwork for them. With a 55m slice of Eden’s beds tantalisingly available, why not fill it with forage for pollinators as a living artwork? 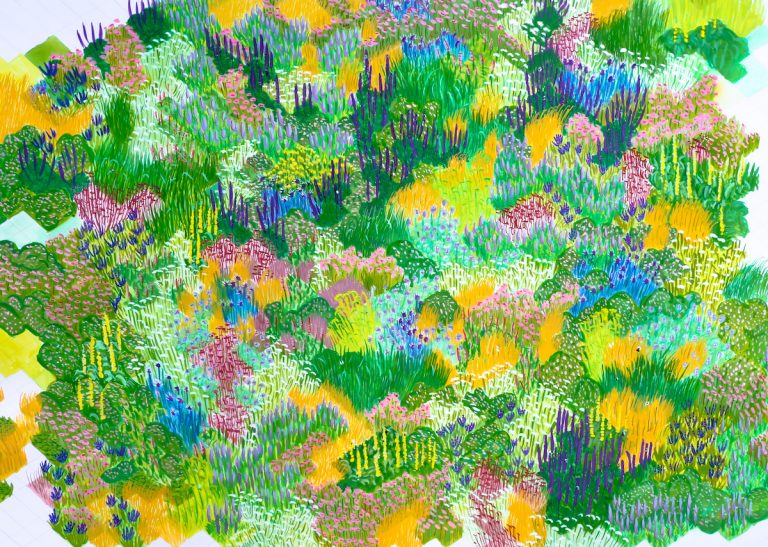 I was struck by how pollinators perceive the world very differently to us. For example, different species see colours differently to us, and each other. Many garden plants that we find aesthetically pleasing have been bred for our preferences, whether smell, colour, or abundance of petals. The energy the plant puts into growing these “features” for us can mean that they produce less nectar and pollen or that their supplies are inaccessible to insects. That was the beginning: what would a garden look like from the point of view of pollinators? How could I create a garden that was empathetic to their tastes, not ours?

The algorithm YOU DESIGNED IS ‘optimised’ for pollinators, rather than humans. What does that mean exactly?

Pollinator Pathmaker is a search for empathy for other species. How can you encode empathy into an algorithm?! I decided to define empathy as supporting as many pollinator species as possible. Since the algorithm is made by humans (in particular, our brilliant string-theory physicist Dr Przemek Witaszczyk of Jagiellonian University, Kraków, ), it can’t remove human biases. But it can help reduce them as it overrides design choices. The algorithm creates gardens that support pollinators’ behaviours, rather than how we might like gardens to look. 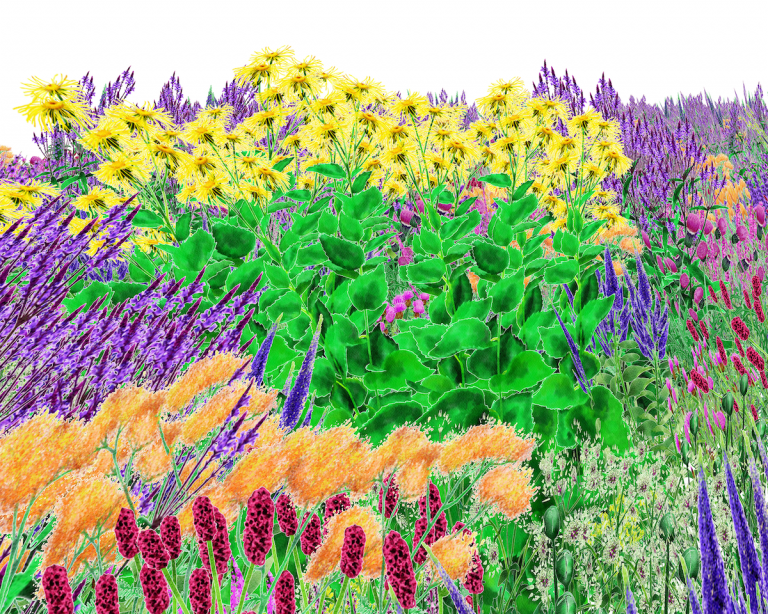 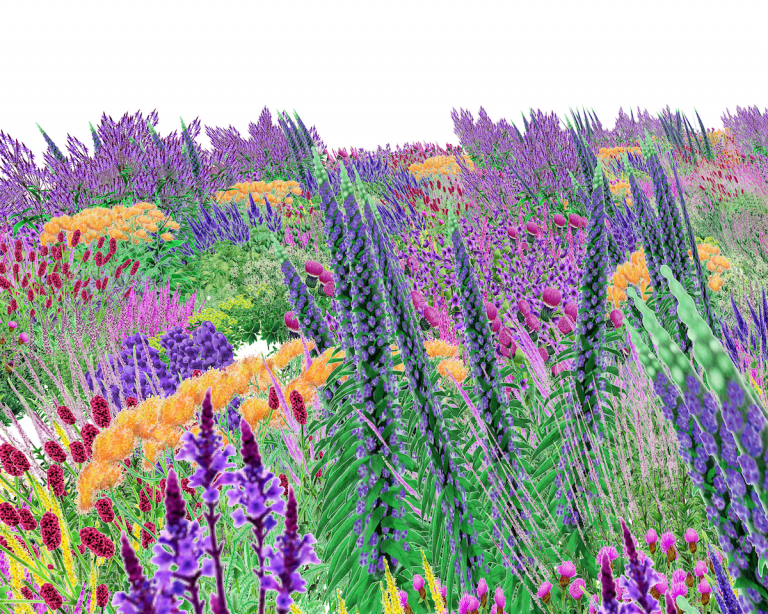 Figuring out what we needed to make this algorithm a reality was a massive research task in the studio and beyond. We’ve worked with Eden’s incredible horticultural team, with pollinator experts and scientists, and done a literary review to establish the parameters to focus on. There is surprisingly little scientific research on the specific pollinators of the vast majority of garden plants.

The algorithm draws on a database where each plant has been carefully researched and chosen for its known benefits to particular pollinators and to ensure it is appropriate for the location. Ultimately, it balances out flowering times and pollinator diversity to create a garden that supports as many different species from long-tongued bumblebees to butterflies, over the year. The plants are also arranged to suit different foraging styles, and over the winter, it provides habitat.

Why was it important for you to step away from human-centred design? Was it difficult to do in practice?

I want the work to invite (human) viewers to see the world from other perspectives, as a way of decentering us. I’ve been working on this approach in a number of my recent pieces, and this was such an amazing opportunity to step outside the gallery and fabricate the experiment in plants over 5 years, telling this story while offering tangible benefit to our primary audience, the pollinators and plants themselves. They’ll be busy taking away pieces of the artwork and bringing pollen back to it from elsewhere. Of course, in practice, the work is made by humans and our biases always creep in. I like to think of this as an unnatural garden designed for nature.

I want the work to invite (human) viewers to see the world from other perspectives, as a way of decentering us.

Algorithms can be unpredictable. Is there anything that surprised you about the final design of the garden?

We’ll see when it starts to bloom! I’m hoping that the juxtapositions of plants and colours will be shocking to our aesthetic sensibilities, but delicious for its more-than-human visitors. 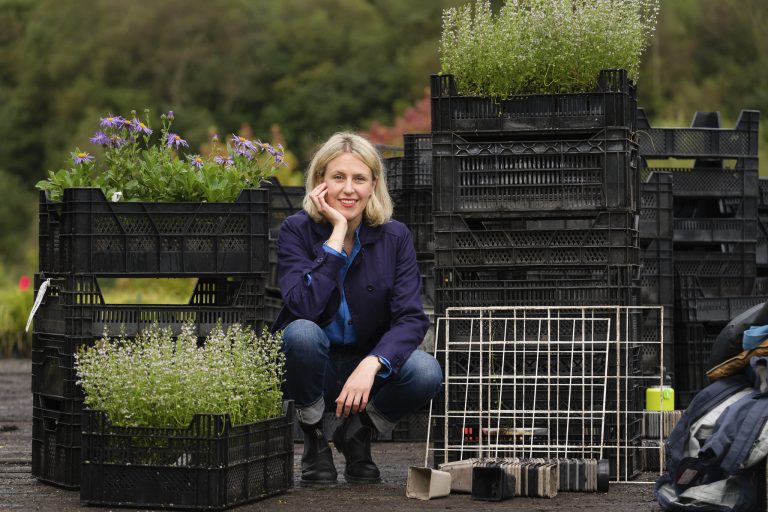 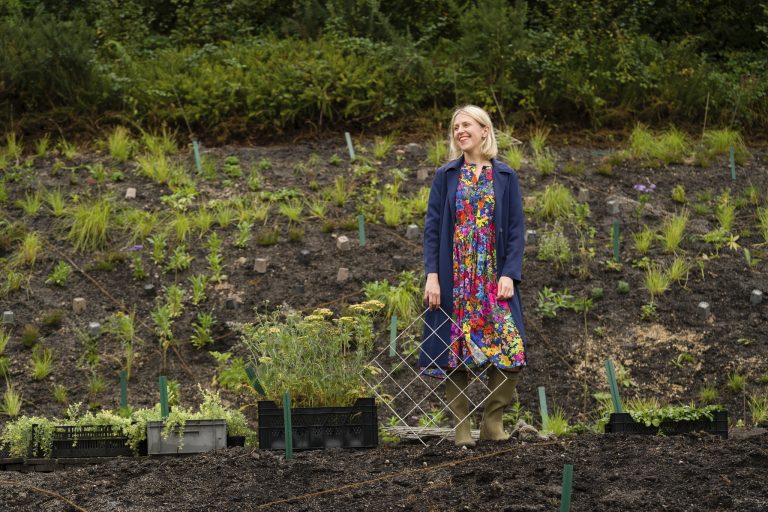 The second part of the artwork is a new website inviting audiences to generate their own pollinator gardens. What do you hope that people will take away from this?

At pollinator.art, anyone can play with the algorithm to create their own unique DIY edition of the artwork. They can explore it through the seasons in a painted visualisation with a soundscape and even see it through an interpretation of pollinator vision. And then they can download their Pollinator Pathmaker plan and plant it!

I was really inspired for this whole work by Eden’s core principles: encouraging a sense of connection, awe, and jeopardy towards our natural world, and above all, giving us hope and agency to protect it. Making the algorithm that we used for the Eden installation accessible via the website is a way to empower people. I feel frozen in place by panic when I think about the climate and ecological emergency, but learning what the issues are and feeling that there is something you can do to feel agency is positive.

Making the algorithm that we used for the installation accessible via the website is a way to empower people.

We’ve worked with Gaia Art Foundation and Google Arts & Culture to develop this online part of the work. We want it to expand by developing a commissioning model based on collaboration and generosity. The Pollinator Pathmaker garden at Eden is the first edition of the artwork. We’re also inviting partners from museums to institutions to collectors to commission new large gardens. Each new international edition will involve developing a new local plant palette that will then be added to the website, so that more local users around the world can plant their own DIY garden.

I hope we’ll see artworks for pollinators blooming around the world!