When we first heard of Ushahidi, it was an open-source tool designed by hacktivists and journalists to document civil unrest during the 2008 Kenyan elections. In the years that followed, the project expanded to a global scale with more than 150,000 applications in 160 countries. The story made its way to us in Amsterdam when co-founder Juliana Rotich presented her incredible work at What Design Can Do 2016. Today, as millions of Americans await the results of their own heated Presidential contest, the same technology is being used to help monitor and mitigate potential conflict across the United States.

The citizen-led platform, which is called EIRUSA, was launched in October amidst growing fears of voter suppression and election violence. It is run by hundreds of volunteers from around the world, who take to the streets and the tweets to help ensure public safety before, during and after the race is called. “We are monitoring physical events with a clear political component, which run the gamut from voter intimidation to clashes between opposing political groups,” said the team in a public statement.

MAPPING THE GOOD & THE BAD

So how does it work? All of the data collected by EIRUSA is crowd-sourced. Reports can be sent in via the web platform as well as through text messages and on social media. This information is then combed through by a team of experienced crisis mappers and community organizers who work ‘round the clock to verify each item. Once published, they appear as colour-coded pins on the interactive map at eirusa.ushahidi.io. 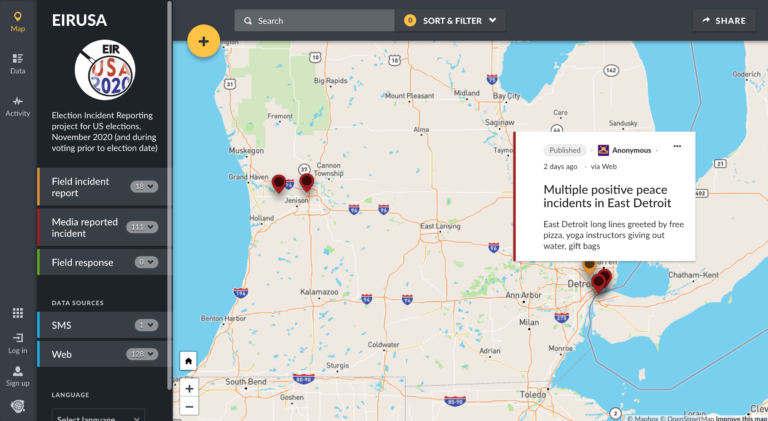 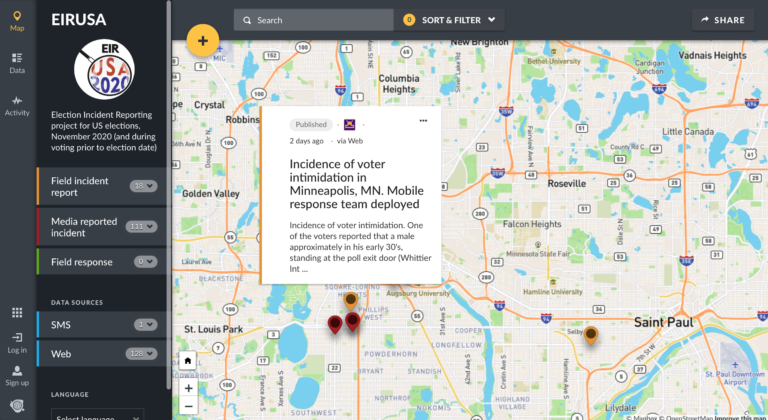 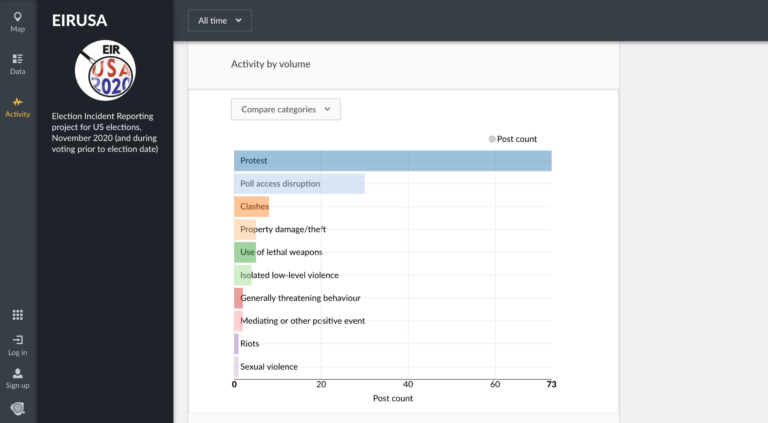 Besides offering a “source of witness”, the platform also functions as an early warning system. They explained: “If there is potential to intervene and de-escalate a situation building towards violence, [news of such events] will be expeditiously transmitted to a team of on-ground mediators and responders.” This includes members from a broad network of partner organisations, like the Trust Network and the National Association For Community Mediation.

In an effort to build peace in the long term, the platform also takes note of when things go well. “We do also cover positive events, such as successful mediation, de-escalation of violence or reconciliation between apparently opposed parties,” said the team. The hope is that with more transparency, comes more pressure for accountability. Time will tell, as the platform continues to develop beyond this election. In any case, it’s a fascinating glimpse into how design and technology could be used to help support voter rights in the future.

To learn more about the collective behind the first iteration of this project, visit ushahidi.com or watch Juliana Rotich’s talk at What Design Can Do 2016.