Paola Antonelli is an author, editor, curator, and one of the most influential minds in the design field today. As senior curator for New York’s Museum of Modern Art (MoMA), her work keenly investigates design’s impact on everyday life, connecting it to architecture, art, science, and technology. ‘People think about design as an embellishment. My job is to make them understand that it is so much more,’ she explains.

Originally from Sardinia, Italy, Antonelli studied architecture at Politecnico di Milano University, after which she curated several exhibitions before writing for Domus and Abitare magazines. In 1994 Antonelli was appointed associate curator in MoMA’s Department of Architecture and Design, a department she has headed since 2007.

One of Antonelli’s boldest moves in this role was to acquire the ‘@’ symbol for the museum’s permanent collection. This forward-thinking attitude is also visible in her ground-breaking exhibitions, including Design and the Elastic Mind (2008), which explored the relationship between science and beauty, Design and Violence (2014) which exposed manifestations of creative destruction, and Broken Nature: Design Takes on Human Survival (2019), which introduced the concept of ‘restorative design’.

Throughout her career, Antonelli’s goal has been clear: to insistently promote design’s understanding, until its positive influence on the world is acknowledged. Today, she combines her work for MoMA with positions on various design boards, and at the School of Visual Arts in New York. Author of many books, her honors include the Art Directors Club Hall of Fame and the 2015 AIGA Medal. 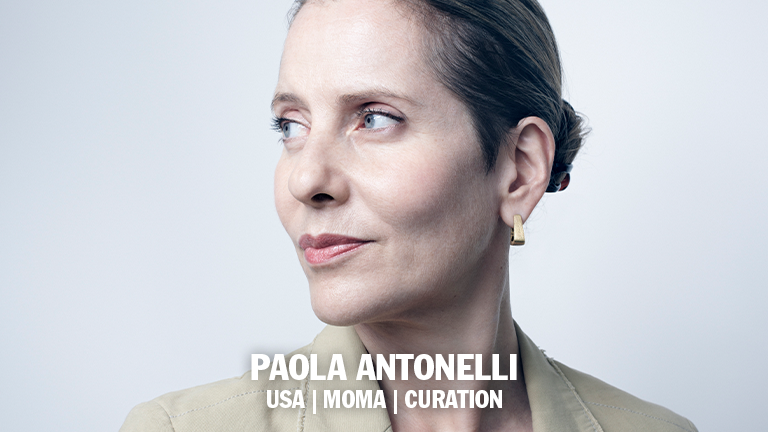