Spinning yarns with bloodShahar Livne on the links between design, ecology and forgotten materials

Conceptual designer Shahar Livne isn’t afraid of a little controversy. Her unique and critical body of work reflects a lifelong fascination with nature and philosophy, often exploring the role of materials as carriers of narratives. But whether she is building an installation or crafting a speculative vision of the future, Shahar often works with materials that are obscure, unconventional — even uncomfortable. Think sneakers made of blood, fossils made of plastic waste, or films about consumerism, excess (and Andy Warhol).

For her latest work, Alchimia, Shahar has created a series of tapestries inspired by the entangled ecosystems of the natural world, and the human need to organise and control them. The yarns and dyes used in the tapestries are derived from animals such as blood, collagen and milk, minerals such as iron ore and hematite, and plants such as the gall apple of the oak tree. To learn more about how she achieved this, we caught up with Shahar for a conversation that also touches on her love of research, her approach to storytelling, and what she sees as ‘the most forgotten material’.

HI SHAHAR! Where does your fascination for materials come from?

I was always very curious by nature. As a child, I liked to touch, smell, observe — and I still find myself doing so. I credit my vast interests to my parents and the opportunities they gave me through travelling, learning and pursuing my interests in science, art and natural history.

My fascination for materials is more about the stories they have to tell and their processes, and less about their characteristics or aesthetics (not that these things aren’t important, of course). I studied art and biology as my majors in highschool and you can still see those two subjects are my favourites when it comes to my way of working. I then developed an interest in philosophy and material cultures through my studies at the Design Academy Eindhoven and later became an autodidact ecophilosopher through my practice. 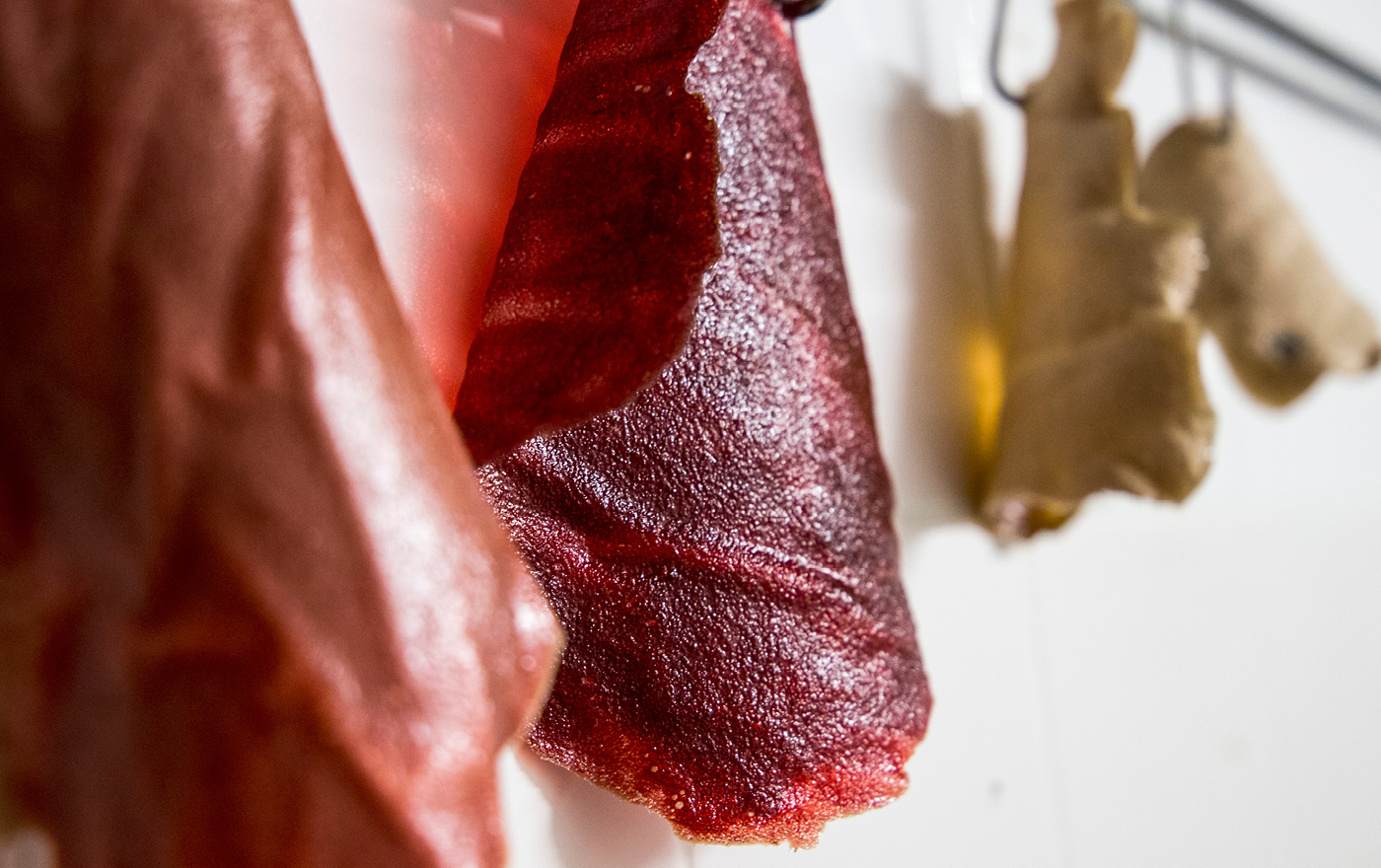 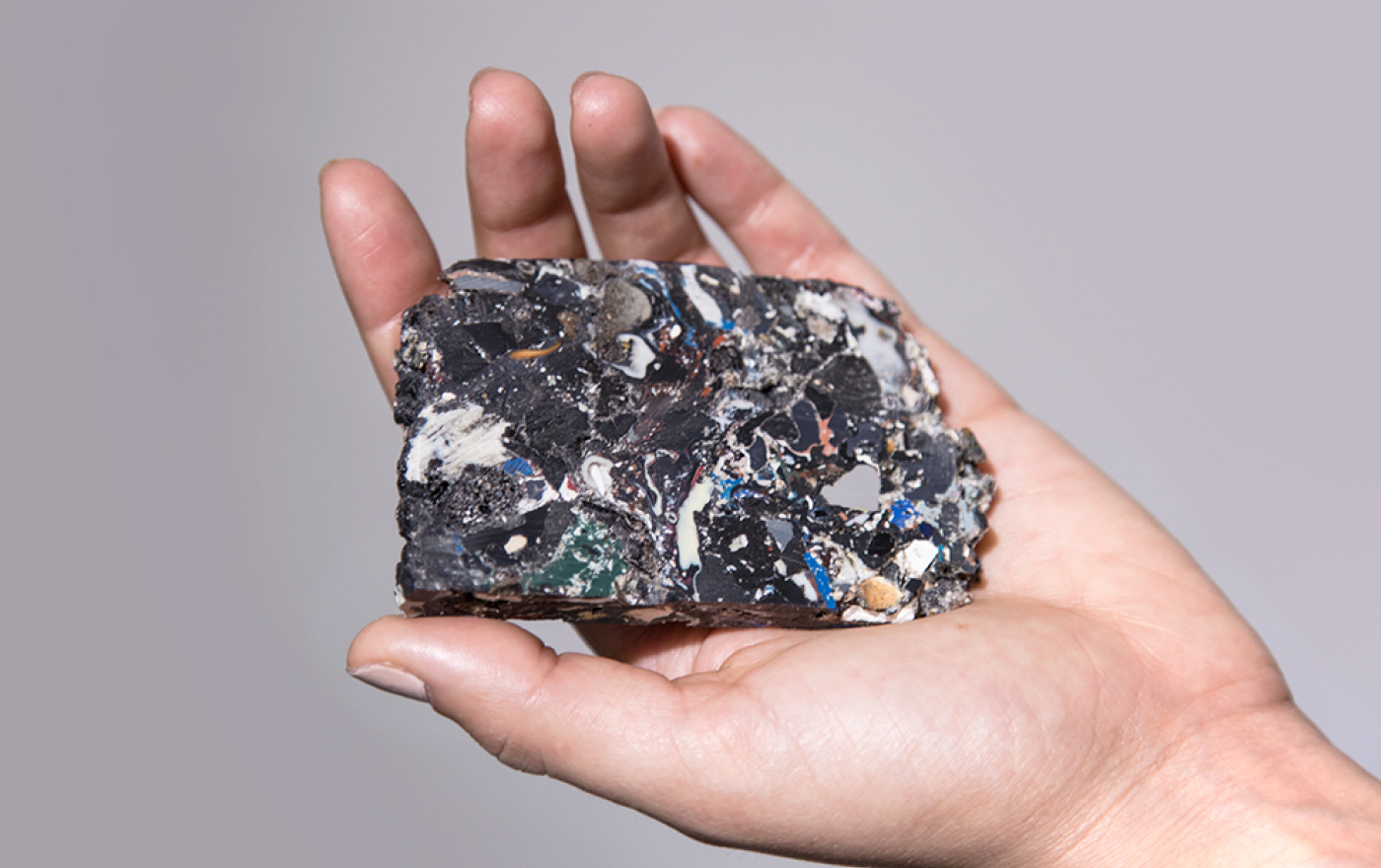 Many of your projects deal with the way humans consume resources on the planet. Why is this topic so important to you?

The way humans treat the world around them has been a major subject for discussion in my generation. As I have a big admiration and fascination for nature, I am interested in how humans think they have separated themselves from it and yet are part of it.

We experience so much of the world through materiality and through our senses. The way we are able to change it in such a vast and extractive way, and how we have come to think that we are superior to it — that triggers me. It also inspires me a lot, as a human being and as a designer that formulates and forms.

‘As I have a big admiration and fascination for nature, I am interested in how humans think they have separated themselves from it.’

Can you tell us more about Alchimia? How did the idea for this project first come about?

I’ve been busy working with animal-driven materials since 2014. I received a grant a few years ago to develop my blood bioleather project, which deals with slaughterhouse waste, into a new type of yarn. This project has seen a lot of ups and downs, some of which led me to seek new directions.

Alchimia is a part of this evolution. Not long ago, I became interested in weaving as a storytelling medium thanks to my research into bio-based yarns and material impregnating. With the help of the textile lab at the Textiel Museum in Tilburg, I was able to experiment with techniques such as jacquard and dyeing, which led to the project as it is today. 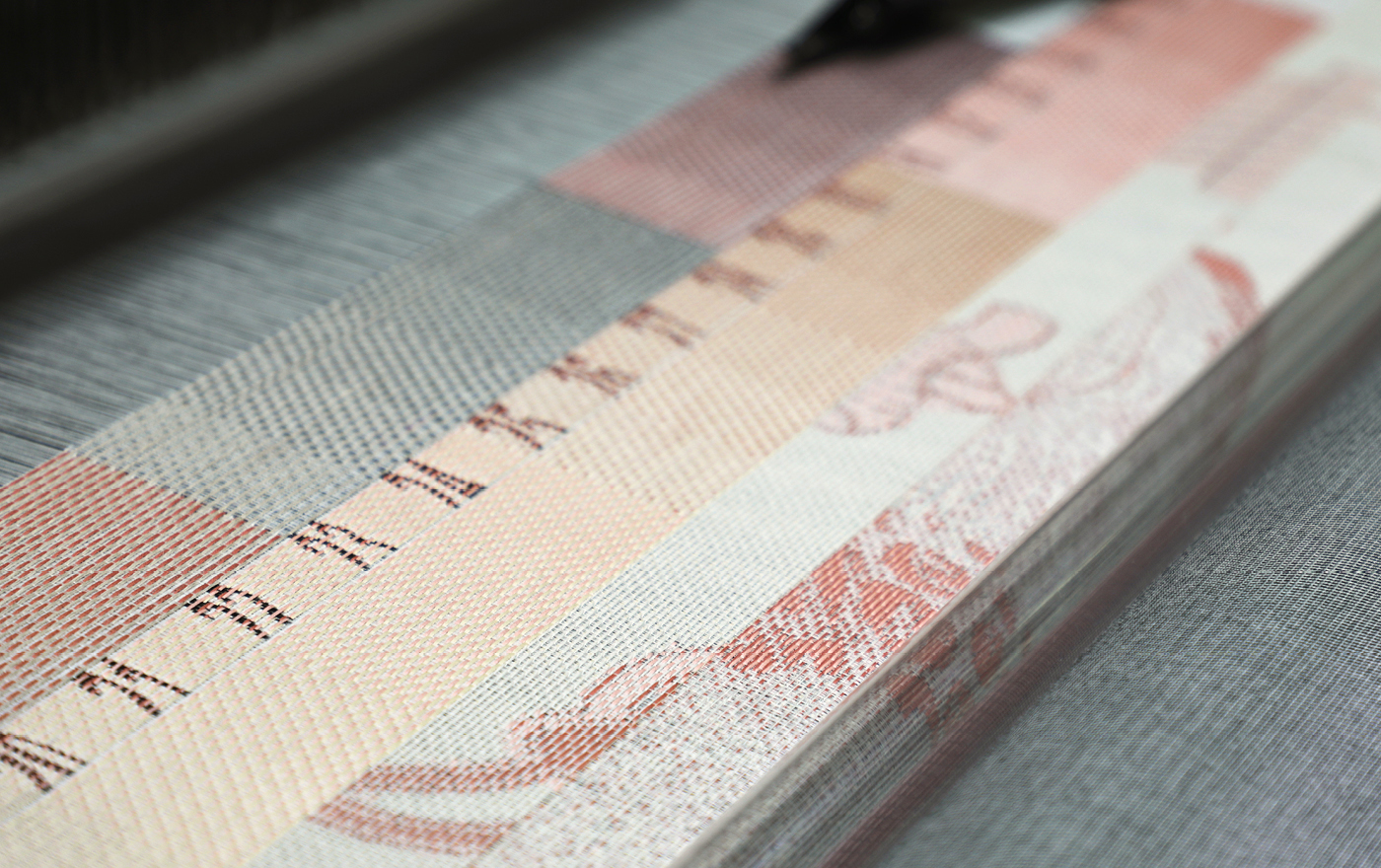 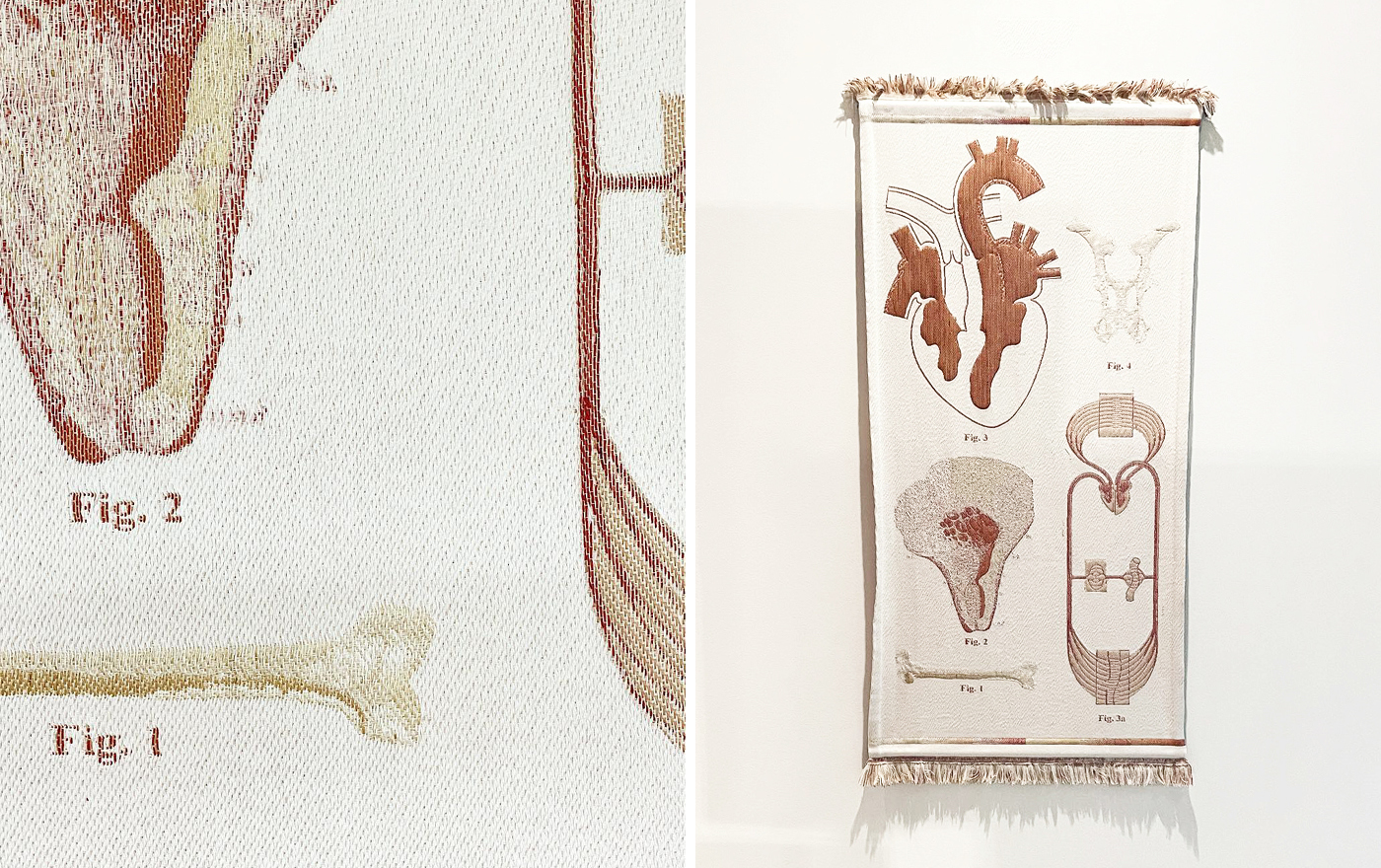 Details of the weaving process for Alchimia, and the final work as exhibited at the Textiel Museum in Tilburg, photographed by Shahar Livne.

What was the research process like? Was it challenging to work with such unconventional materials?

Definitely! Blood as a material is very psychologically challenging. It is a confronting material since it smells a lot like death when you process it — and of course it is in its rawest form when it is liquid, reminding you of its origins in every moment.

In terms of research, I found some references of the ancient uses of blood, milk, plants and other minerals in textiles and leather dying. It is actually a very, very old practice. I then got in contact with Roua Alhalabi, a master natural dyer in Amsterdam, who with her immense knowledge helped me to develop the dyes I ended up using in my tapestries. One of my favourite things about what I do is the opportunity to collaborate and learn from experts. Although it is challenging to learn new things every time I do a new project, I really enjoy it.

‘Blood as a material is very psychologically challenging.’

How did you end up choosing to make a series of tapestries?

For centuries, tapestries have been used as a medium to tell stories. One of my inspirations was the famous The Hunt of the Unicorn or the Unicorn Tapestries which show a group of noblemen and hunters in pursuit of a unicorn through an idealised French landscape. It is not only an exciting story told through beautiful tapestries, but the theorised meanings of it ranges from religious to poetic translations. Additionally, the way it represents plants is a botanical marvel. I was especially inspired by the theme of the chase. In humanity’s attempt to capture a mythical creature, I see a pursuit to ‘cage’ the wildness of nature. 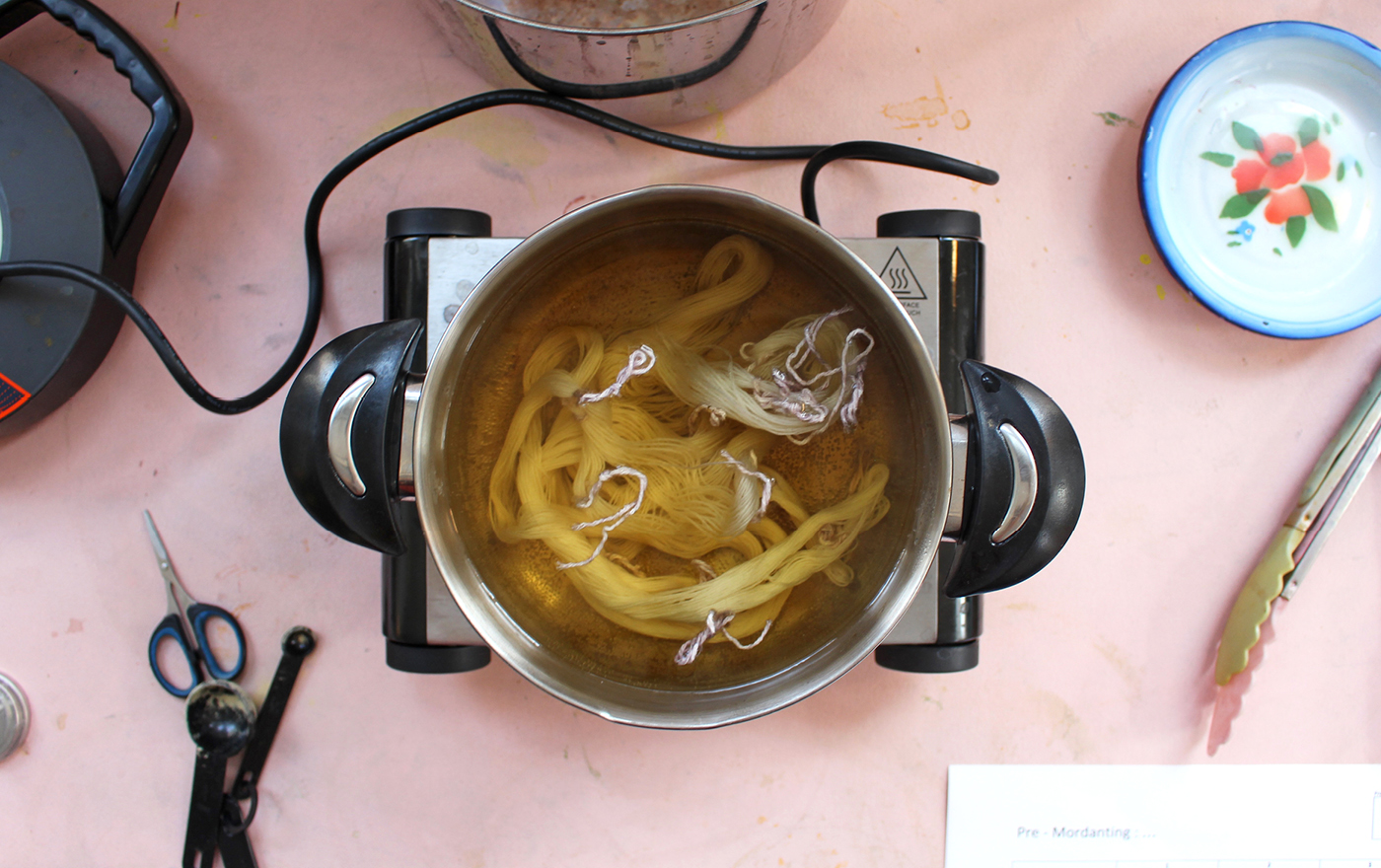 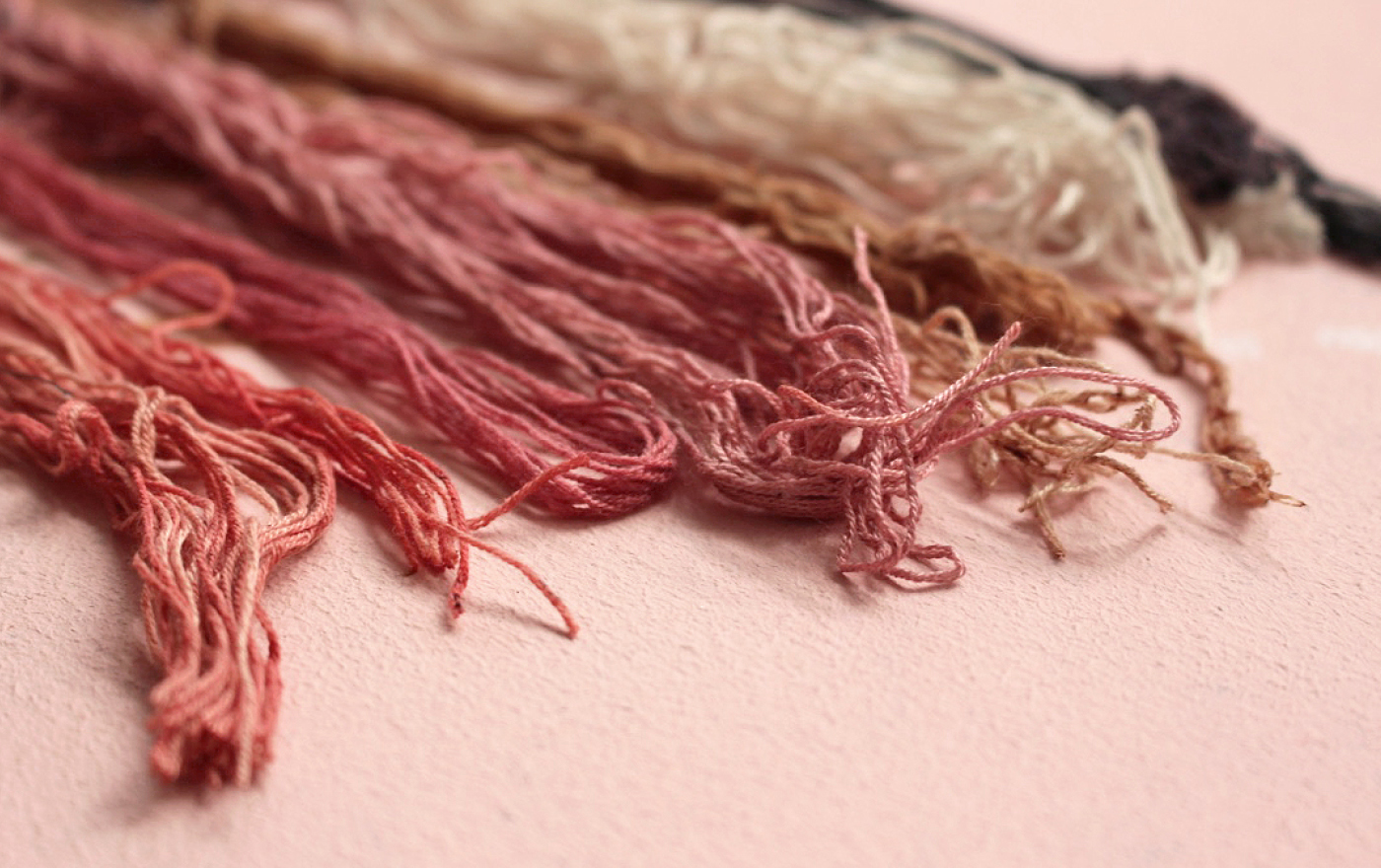 Details of the dyeing process for Alchimia, photographed by Shahar Livne.

What kind of conversations are you hoping to spark with this project? Have you had any interesting reactions to it yet?

The first tapestry from the series, called ANIMAL, is now being shown in an exhibition titled ‘To Dye For’ at the Textiel Museum. It is presented next to a jar containing dried cow blood. I haven’t had a chance to hear the reactions of visitors yet but hopefully, when the series is completed I will be able to present it worldwide. I hope to spark wonder in people — that is the goal of all my projects. I want to encapsulate the mythical beauty of the material world around us and urge people to contemplate our complicated relationships with it.

Can you share a sneak peek of what you’re working on next?

I am just finishing a very exciting project commissioned by the world culture museums of the Netherlands! It is called The Most Forgotten Material and will be launched in the upcoming exhibition ‘Plastic Crush’ at the Tropenmuseum in November.

The project investigates the very rich history of a natural rubber called Gutta Percha and its connections to colonialism, botanical research and even the internet. It is a fascinating material with a lot of stories to tell and I am presenting it in the context of loss, as the tree was almost driven to extinction and it is barely known today.

‘I want to encapsulate the mythical beauty of the material world around us and urge people to contemplate our complicated relationships with it.’

Lastly, we’d love to know: what’s one thing that excites you about the future of design?

In the last decade design has become such a flexible term and practice, which gave designers like me the freedom to carve their own niche within it. This is exciting because it can go in so many ways, and I am looking forward to seeing how it will evolve and transform, create new fields and manifestations.

All images courtesy of Shahar Livne.