Right now, leaders from around the world are arriving in Glasgow for COP26 aiming to set goals to secure a positive climate future — ‘uniting the world to tackle climate change’. While the climate is undoubtedly a shared responsibility, the climate crisis is hardly a shared burden. In fact, it’s usually more dividing than uniting. That’s what environmental social initiative Do The Green Thing is bringing into conversation at the climate summit with a powerful exhibition titled The Colour of the Climate Crisis.

The exhibition is a creative response to Do The Green Thing’s recent issue by journalist and activist Minnie Rahman, which you may have spotted on the WDCD blog earlier this year. The opinion piece unpacks the inequality driven by climate change, explaining how the richest 1% of the world’s population causes twice as much carbon dioxide as the poorest 50% but do not share the burden of its consequences.

Minnie doesn’t sugarcoat it: ‘Fine, disasters do not discriminate but – as people, we do. The climate crisis is racist because it exists in a system that is racist.’ The fact of the matter is, ‘it is much harder to keep yourself safe and protected if you are already at a disadvantage. All of this means that across the world, white people are more protected, secure and safe from the life-threatening impacts of a changing environment.’

‘Fine, disasters do not discriminate but – as people, we do. The climate crisis is racist because it exists in a system that is racist.’

The exhibition, which first launched on 31 October 2021 at Pipe Factory in Glasgow, showcases the work of 24 Black artists and artists of colour exploring the relationship between racial injustice and climate injustice. Through art, the exhibition aims to centralise the experiences, ideas and leadership of communities on the frontlines of climate action.

With the world’s governmental leaders on climate present, the exhibition offers them an opportunity: ‘To be quiet, and listen. To be humble, and learn. To be brave, and commit to meaningful action.’ 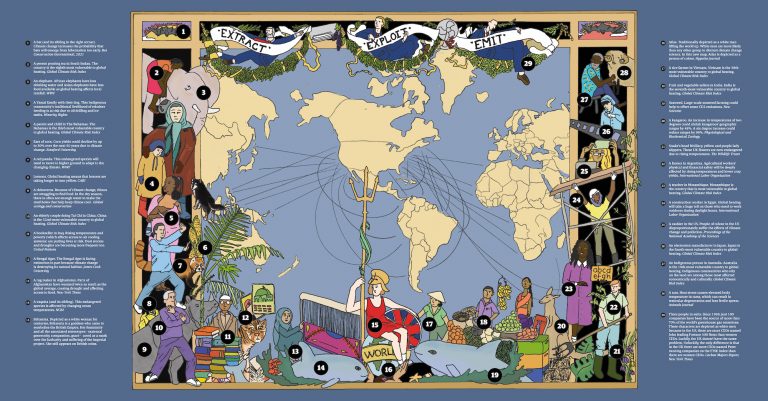 Before data journalist and illustrator Mona Chalabi takes part in an exhibition, she always considers the existing visual language around a subject. Then she decides if she wants to use the same shapes, icons and colours, or deviate from them completely. She says, “When I started to do that same research for this work, I found an old imperial map. It was such a beautiful image, but that was its danger – because oppression can be presented in aesthetically pleasing ways.” Like all her work, this piece is informed by data. And like all her work, Mona humanises that data, in this case surrounding the frame with plant, animal and human characters who themselves embody the facts of climate change, and make it impossible to ignore the white supremacist neo-imperialism that created it. 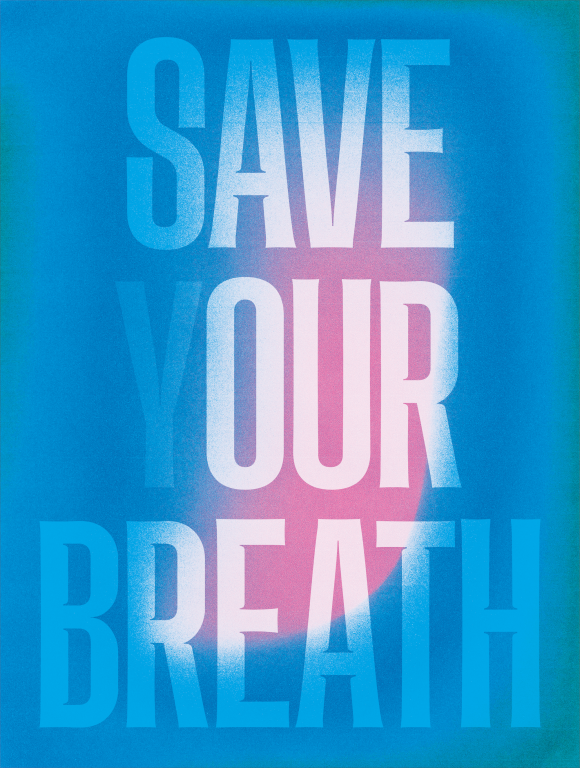 Seals has been on a lifelong path when it comes to design: he’s been practicing writing in cursive since he was in kindergarten; sold $3 graffiti style name cards to his classmates between the ages of ten and eleven. By high school, he was designing tattoos, bead jewelry, comic strips for the school paper, yearbooks, his first font, and more; and at 20, he promised himself that by 25, he’d become an internationally respected designer. Which he now is, having founded his eponymous design studio (2015-2020) straight out of college and his renowned font foundry (Vocal Type) just a year later.

Vocal Type is a diversity-driven type foundry, inspired by the lack of diversity in the graphic design industry. Each typeface highlights a piece of history from a different underrepresented race, ethnicity, or gender—from the Women’s Suffrage Movement in Argentina to the Civil Rights Movement in America and beyond. 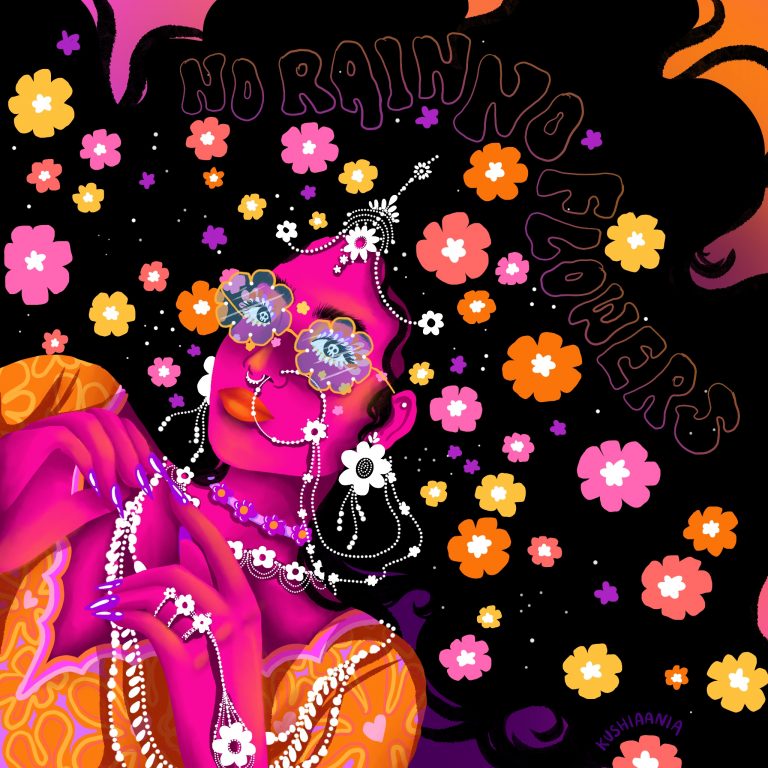 Let us reap what we sow
Digital art

“Black people, Indigenous people and people of Colour put so much love into the earth, only to suffer the catastrophic and often fatal consequences of our racist society and systems,” explain Yo-Janda & Kushiaania – the illustrator duo behind the UK-based MUSH Studio. Let us reap what we sow is rooted in the story of their grandparents who emigrated to the UK in the 1960s after growing up in small farming villages in Punjab, India, where their love of the land was their livelihood. 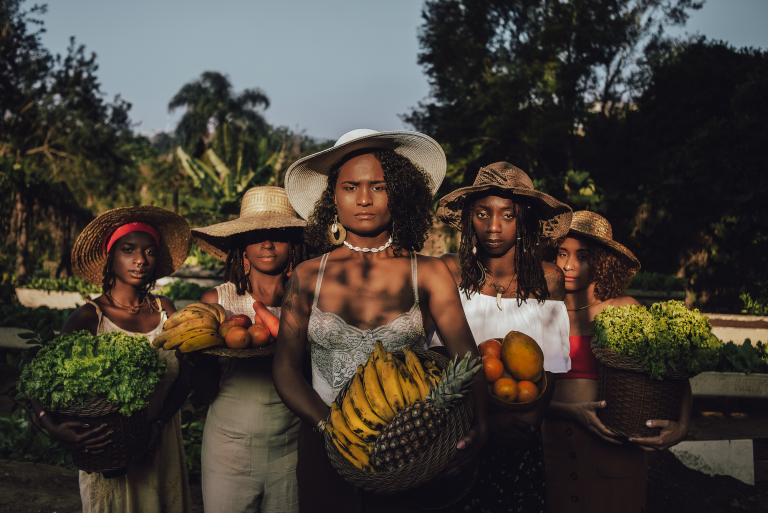 Raiz do Mundo (Root of the World)
Photography series
2021

“Raiz do mundo is a feminine knowledge passed from generation to generation about self-support and planting as a human right, and connection with the energies of nature,” explains visual artist Fábio Setti and multidisciplinary artist Tamara dos Santos. Their work splits into two phases: the first is about connection with ancestry and spirituality, deities of nature and their strength – represented by a young Black woman in a garden. The second is about female organisation, knowledge, self-sustainability and community – represented by a group of women symbolising phases of the moon. 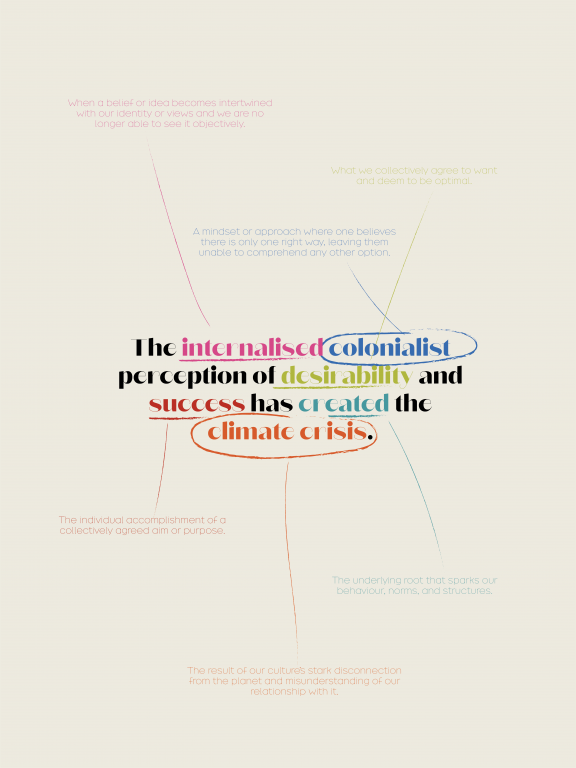 Internalised Colonialism draws on Hannah Phang’s background in human-centred design and synthesises insights from her podcast Crystals, Clits and Climate. Finding patterns of personal experiences, she highlights root causes of collective oppression. Hannah explains: “Through messaging on a mirror, this piece invites the viewer to reflect on and explore their own internalised definitions of desire and success, and how we often unknowingly participate in systems of oppression, including forms of oppression that disconnect us from ourselves, others and our home planet.” 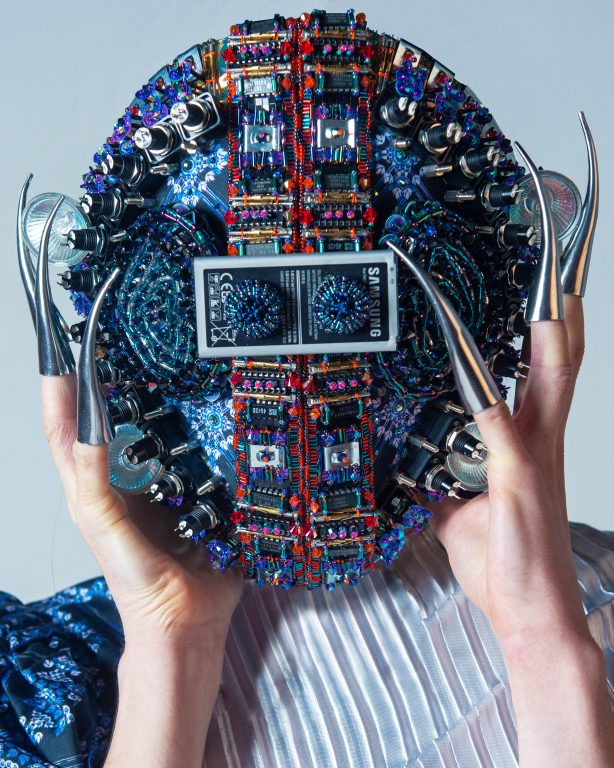 Pimchanok Chaiphet is a Thai-British designer, maker, artist, craftswoman and critical thinker working across sustainability, social justice and equality. E-Waste Cyborg raises the issue of the UK’s illegal export of toxic electronic waste to countries including Ghana, Nigeria, Pakistan, Tanzania, Thailand and Ukraine, which affects the health of local communities – particularly children. Pimchanok says: “The mask tells a fictional story of a person who lives near the dumping ground, having to breathe intoxicated air and harmful chemicals to the point where a human being turns into a cyborg.”

Shyama Golden is an artist, illustrator and designer with a background in oil painting, now working from Texas, USA. Patterns, people and nature are common elements in her work, in which hyphenated-Americans often play a protagonist role. Shyama says: “Nature vs Future is a portrait of a fictional young woman who represents the global majority and Indigenous people who are not only disproportionately affected by climate change, but actively speaking out and organising against the ravages of extractive capitalism.”