As an architect, activist and academic, Julia Watson has spent nearly twenty years studying Indigenous ways of living, knowing and building. In her bestselling book, Lo-TEK: Design by Radical Indigenism, she explores what ancient, ecological innovations from around the world can teach us about our relationship with nature. From living root bridges that can withstand floods, to sunken garden beds that thrive in the desert, many of the examples in the book also offer valuable lessons about climate resilience. On 3 June 2022, Julia will join us on stage at WDCD Live Amsterdam to talk about how these technologies can guide us towards a ‘future that’s built upon symbiosis’.

Last week, we had the pleasure of talking to Julia about her extraordinary work, and her life-long interest in Indigenous systems and philosophies. Growing up in Brisbane, Australia, she remembers encountering different cultures and landscapes at a young age. ‘I grew up in a place called West End, which had a really strong Indigenous presence. The area was originally called Kurilpa, meaning ‘place of the water rat’. And it was an area where—pre-colonialism—local Jagera and Turrbal tribes would come to meet in the beautiful floodplains by the river.’ 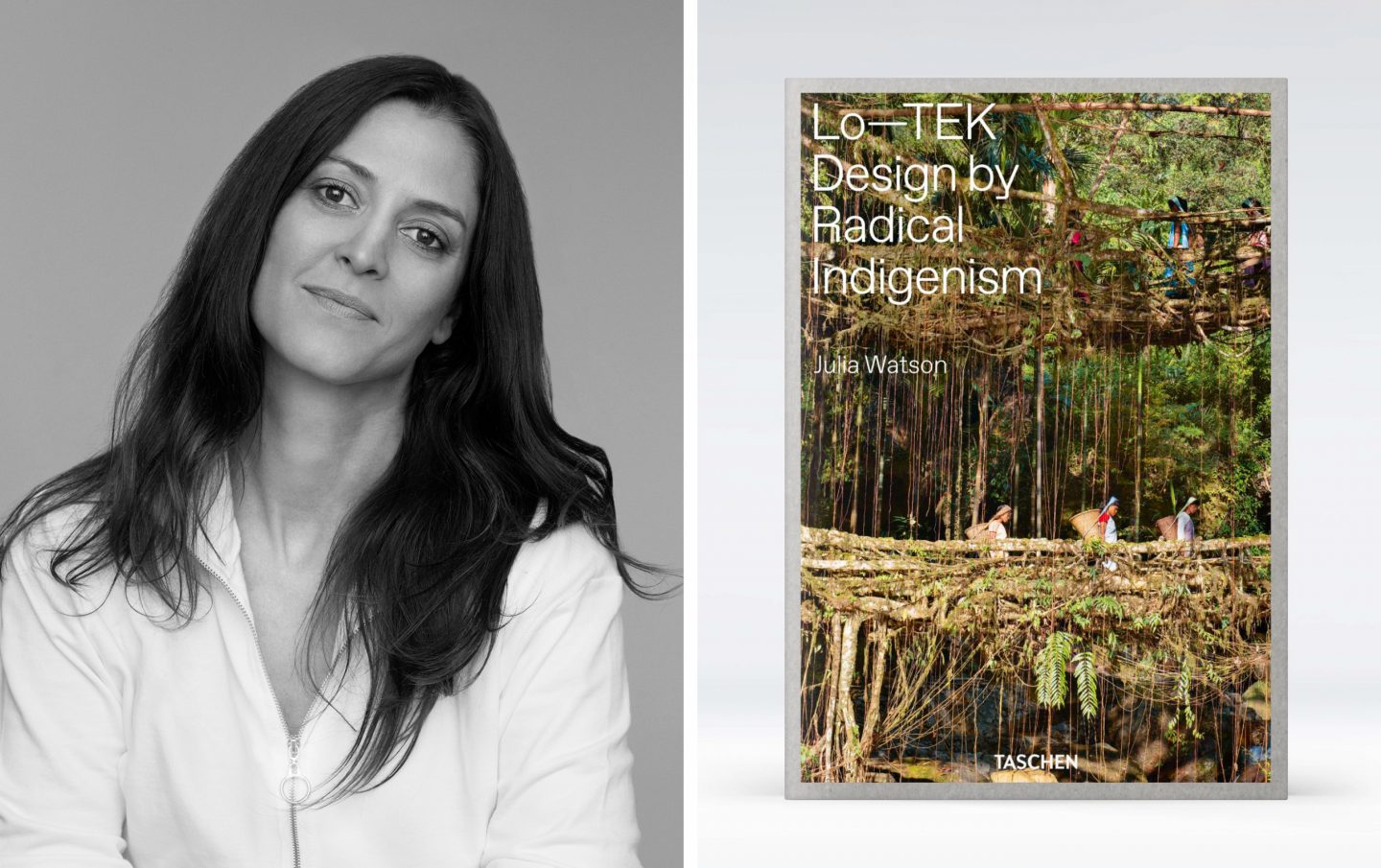 After high school, she decided to pursue architecture at Queensland University, where she was able to develop her research into Aboriginal cultures and practices. For Julia, the experience would end up changing the way she thought about the history of Australia. ‘Even though I grew up in a multicultural area, you are taught a certain history about your country, and it’s a very colonial history. During architecture school, I was exposed to things that discredited these narratives and gave a different, decolonial perspective of my own country.’

From then on, Julia became fascinated with the ecological, cultural, and spiritual threads that bind humans to their environments. ‘I was learning all these Indigenous stories about this landscape that I had lived in for my whole life, but had no understanding of,’ she explains. ‘And I think that for anyone who’s grown up in a place like that, to suddenly learn about a culture that had been there forty to fifty thousand years before you—that’s a really big moment that cuts through your understanding of place.’

‘During architecture school, I was exposed to things that gave a different,
decolonial perspective of my own country.’

The next few years would see Julia continue her studies at Harvard University, and travel the world to research various communities and their sacred sites. During a visit to the rice terraces of Bali, she learned that traditional farmers on the island had developed a water management system called the Subak, which was maintained through a collaborative network of canals, tunnels, villages, and temples. Here was a thousand-year-old innovation that was not only sophisticated, but sustainable, too.

‘I realised then that these rice terraces were a technology—and that they’re a technology that maybe you could build other technology into,’ she recalls. ‘After Bali, I got introduced to the work of other communities like the Maʻdān in Southern Iraq. And I thought: these are all incredible technologies that no one is talking about!’ Although they were often complex, adaptive, biodiverse and deeply integrated with local communities, she found that broader design discourse would often ignore these feats of human ingenuity, deeming them primitive. 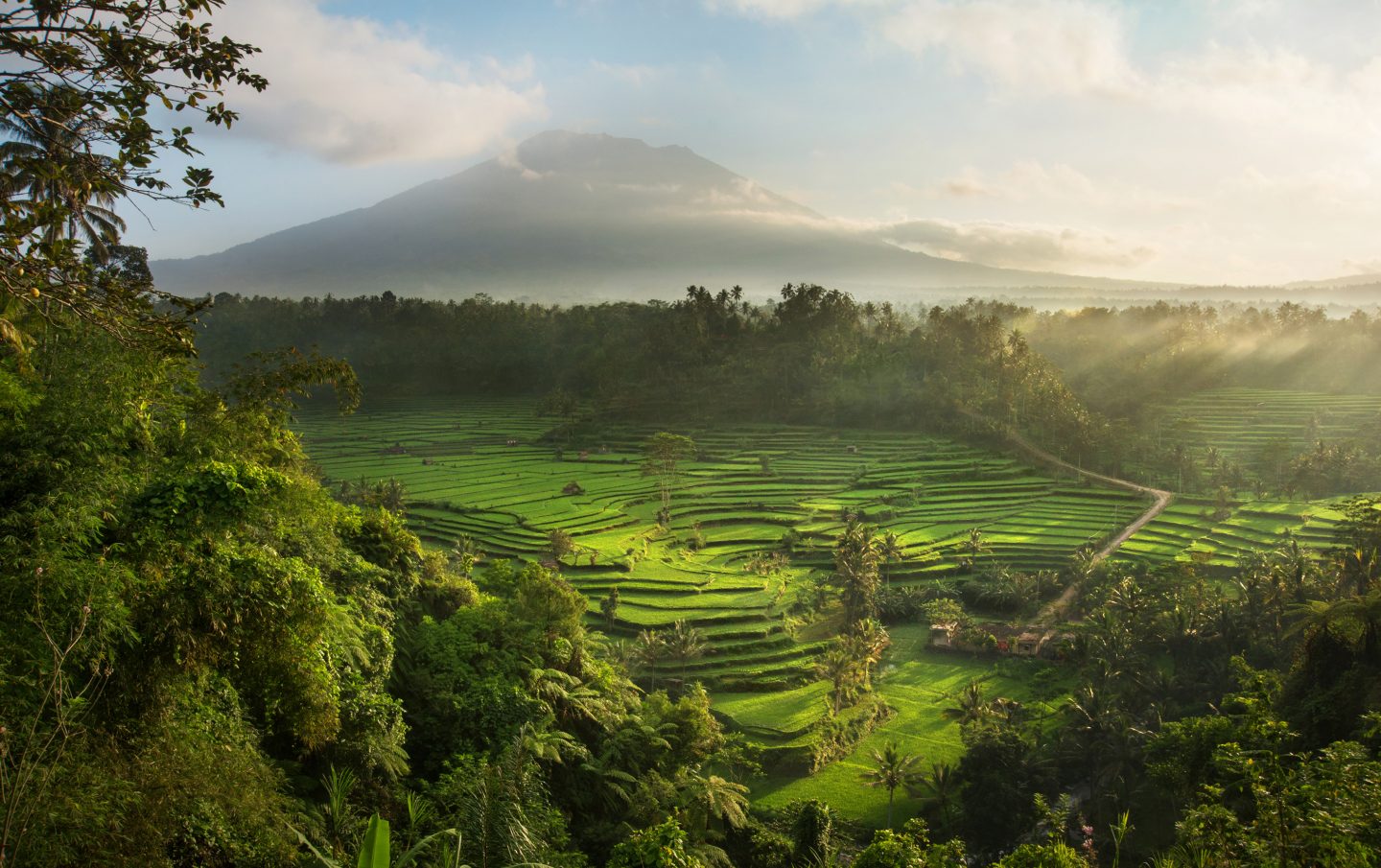 A view over the sacred Mahagiri rice terraces, a small portion of the one thousand year old agrarian system known as the subak, which is unique to the island of Bali, Indonesia. © David Lazar.

How many technologies are out there today that haven’t been considered as technologies yet? And what would happen if instead of dismissing these ideas, we learned to celebrate—and centre—them? These were the questions that ultimately led Julia to the concept of ‘Lo-TEK’. The term is a conjunction of Local and Traditional Ecological Knowledge, and offers a new mythology of technology that is rooted in Indigenous methods, beliefs and practices. Eventually, it would become the core of Julia’s 2019 book with Taschen, Lo-TEK: Design by Radical Indigenism.

FROM SUPERIORITY TO SYMBIOSIS

Informed by more than seven years of travel and research, the book offers a diverse blueprint for resilient, regenerative design. Through four sections spanning Mountains, Forests, Deserts, and Wetlands, it highlights nature-based technologies from 18 countries including Peru, Tanzania, Iran, India, and Indonesia. Many were borne out of necessity, cultivated by Indigenous tribes as a means to grow food, make shelter, and protect themselves from natural disasters. Most are also steeped in cultural significance, often connecting spirituality with caring for the land. Viewed together, they are a powerful reminder that humans can live in harmony with nature, and indeed have done so for many centuries.

Julia’s hope is that the book will provoke new conversations about the value of Indigenous knowledge, and the urgent need to rethink our response to climate change. ‘Often we talk about sustainability as a catch-all for solving problems with a lack of understanding about resource limits, or inputs and outputs, or ecological footprints,’ she says. ‘But it’s also about a lack of understanding of how the human being relates to their environment, and how the environment relates to the human being. It’s a very reciprocal relationship. I think ‘sustainability’ doesn’t capture that fundamental understanding, which is why in the book, I talk about symbiosis.’ 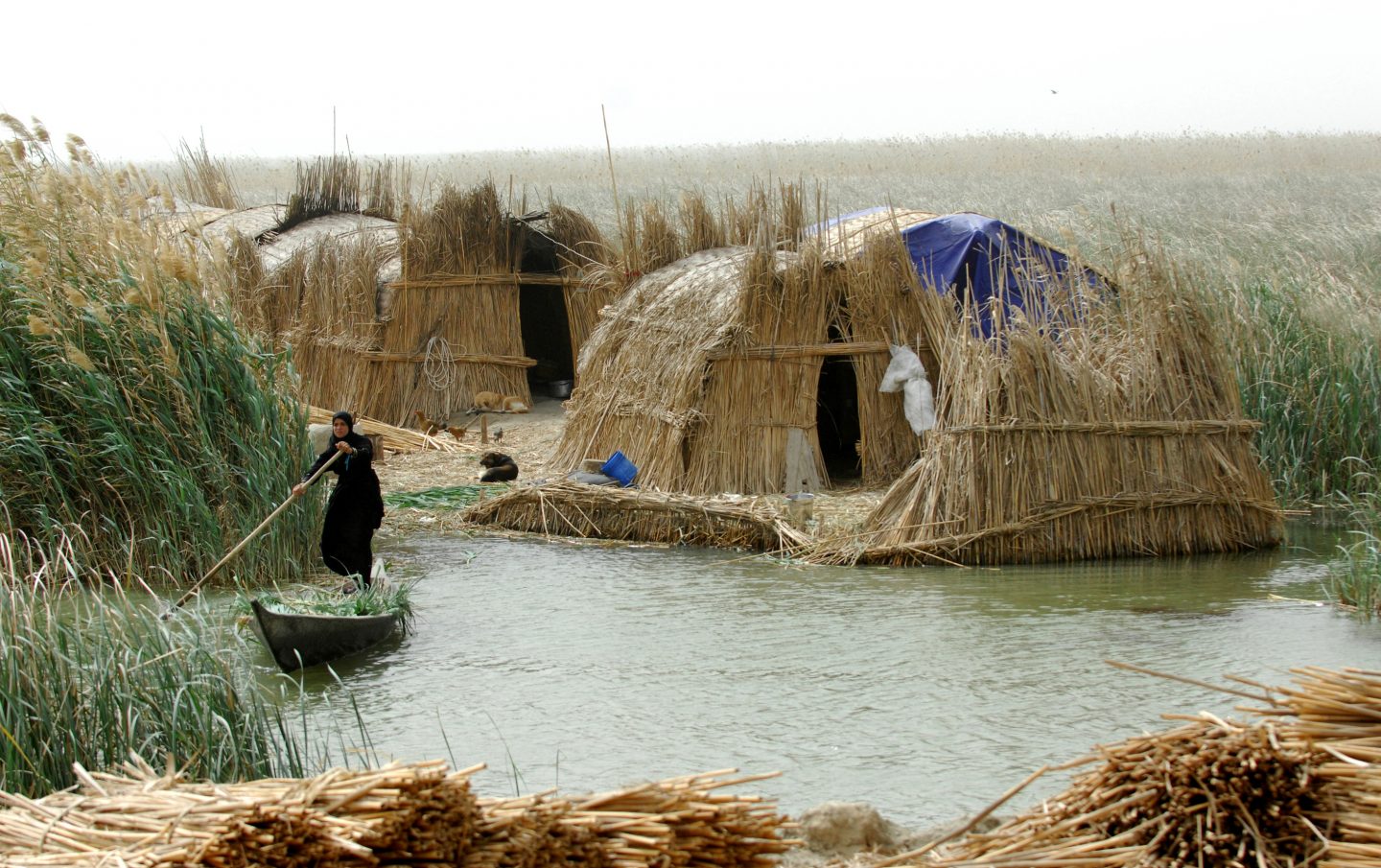 In the Southern Wetlands of Iraq, an entire Ma’dan house known as a mudhif, which is built entirely of qasab reed without using mortar or nails, can be taken down and re-erected in a day. © Esme Allen. 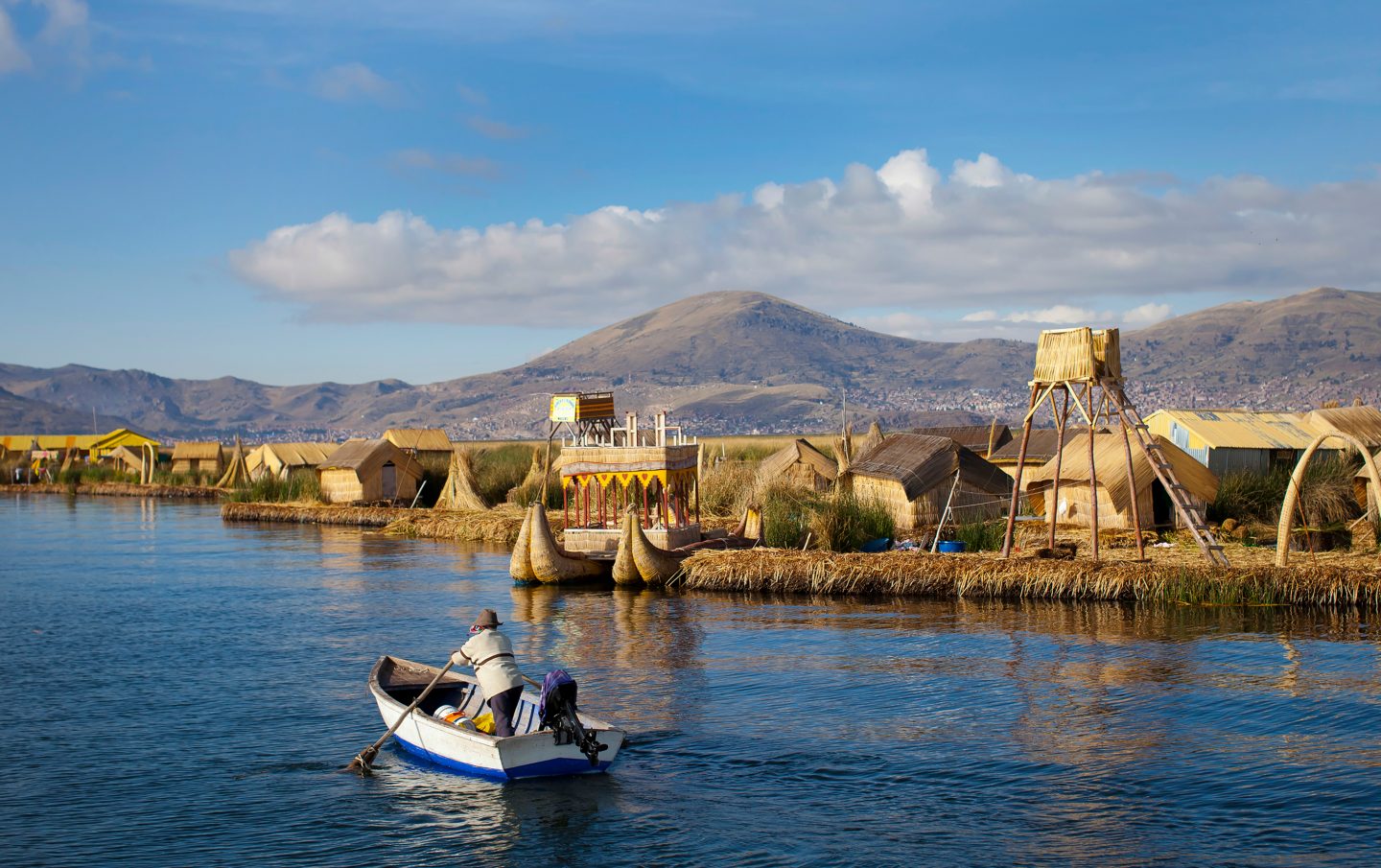 Las Islas Flotantes is a floating island system on Lake Titicaca in Peru inhabited by the Uros, who build their entire civilisation from the locally grown totora reed. © Enrique Castro-Mendivil.

If we could unlearn the idea that humans are separate from nature, Julia believes we’ll have a better chance at designing solutions that are truly active, adaptive and restorative. ‘The idea of ‘sustainability’ comes from our disassociation from nature,’ she observes, pointing Western society’s legacy of colonisation and exploitation. Indigenous people have an understanding of the Earth that is ‘far stronger, far more integrated and more place-based than that.’

‘Our role as human beings is to be the custodian of life. It’s more important
than ever that we understand and support that role.’

‘Another prevalent understanding of local and Indigenous communities is that our role on this Earth is to protect other forms of life on Earth,’ Julia adds. The great irony here, of course, is that Indigenous communities are the ones who are suffering the most from the consequences of climate change. With so much at stake, it’s urgent that we pay more attention to the idea of custodianship in mainstream discussions about sustainability. ‘That responsibility needs to come to the foreground: that our role as human beings is to be the custodian of life. It’s more important than ever that we understand and support that role.’ 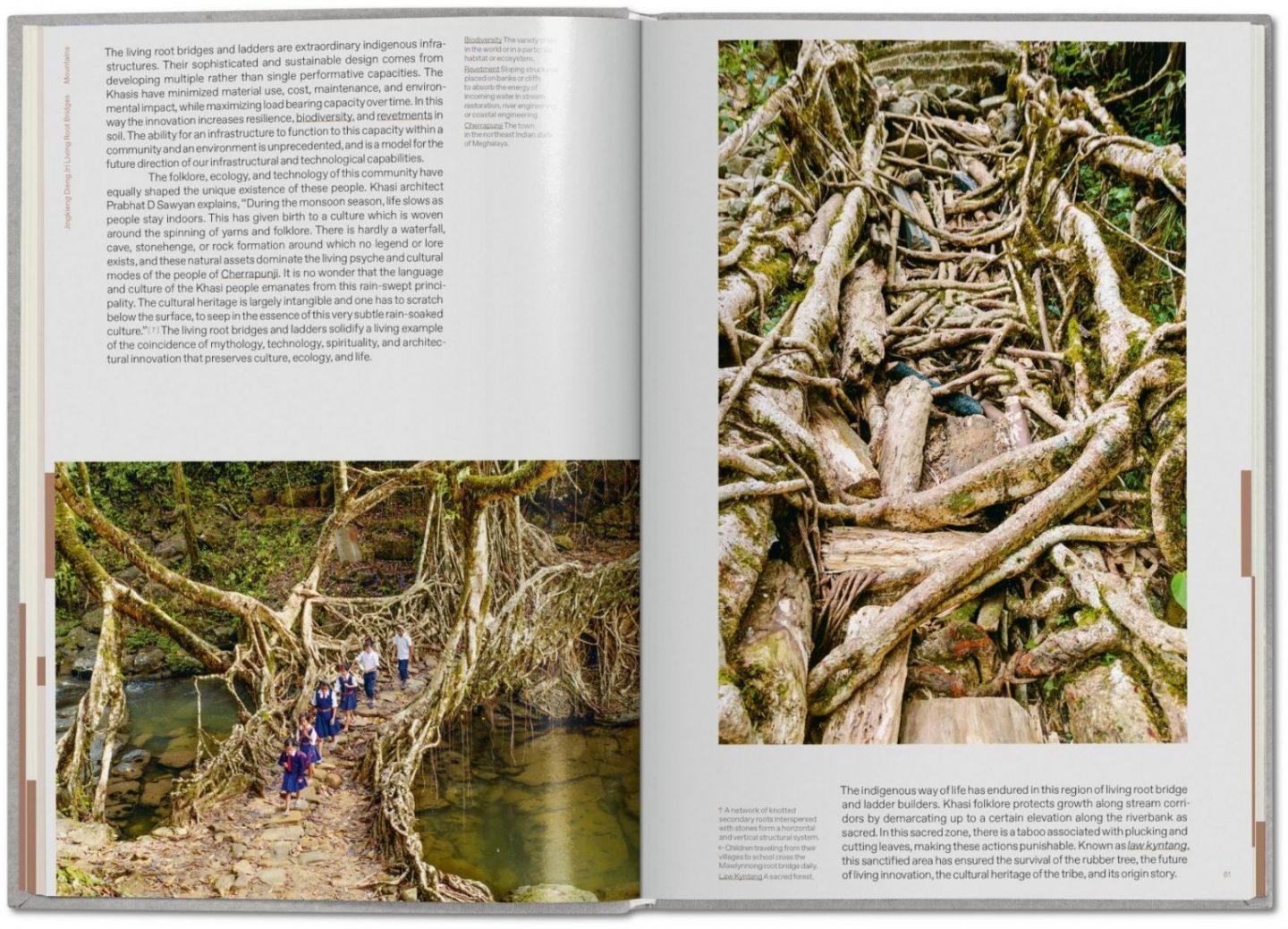 Inside pages of the book, showing the living root bridges of the Khasi people. 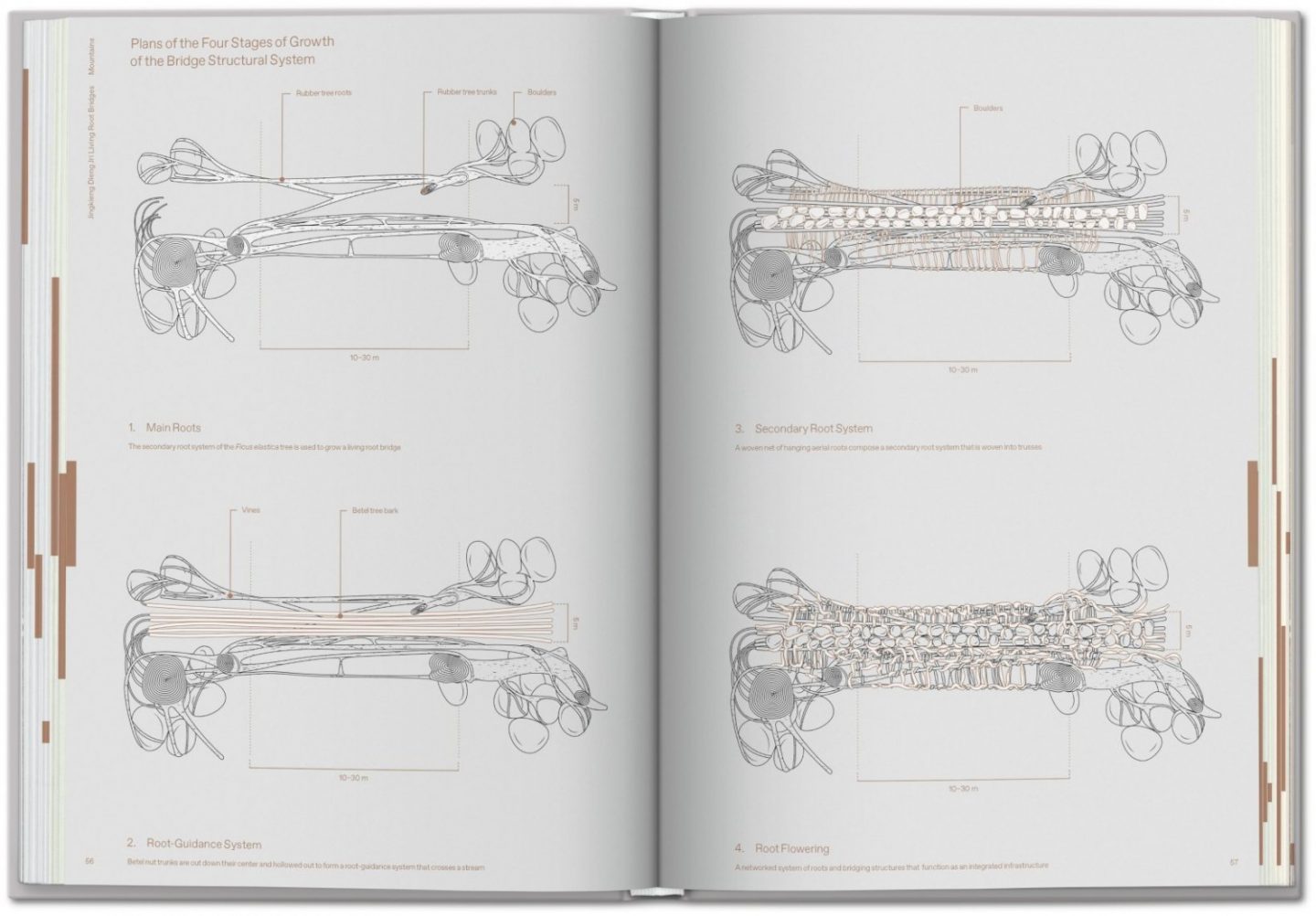 Inside pages of the book, showing the living root bridges of the Khasi people.

When she’s not writing or teaching, Julia spends a lot of her time exploring ways to put these ideas into practice. Often she does this as the creative director of her eponymous landscape and urban design studio, which is oriented toward the practice of ‘rewilding’. She also regularly contributes to various exhibitions across the globe, and recently completed an installation for a new show at the Barbican, Our Time on Earth. ‘It’s an extension of the ideas expressed in my book,’ she tells us. For the project, she collaborated with three of the communities in the book to project how their technologies could be applied to urban environments in 2040.

So what might our cities look like if they were designed according to the principles of Lo-TEK? For Julia, the question is less about replacing one mode of innovation with the other, and more about marrying different ways of knowing. As she puts it: ‘How do we, not translate one to the other, but create a middle ground for both perspectives to exist and understand each other?’ It’s in this space—between skyscrapers and ancient wells, artificial intelligence and local wisdom, that we might find the answers we’re looking for.

Want to catch Julia on stage at WDCD Live Amsterdam 2022? Click here to learn more about the festival and visit our ticket shop.

Top image: A young fisherman walks under a living root bridge at Mawlynnong village, India. In the relentless damp of Meghalaya’s jungles the Khasi people have used the trainable roots of rubber trees to grow living root bridges over rivers for centuries. © Amos Chapple. Images courtesy of Julia Watson.