According to the United Nations, the first Earth Day took place in 1970, when 20 million people in the United States took the streets to protest what they considered an environmental crisis: oil spills, smog and river pollution. In the decades since, we have reached multiple tipping points — ecological, epidemiological, social. And as we continue to discover, each is inextricably linked to the other. The most unprotected populations are also the first to face the impacts of climate change, famine and disease. So, as we build a sustainable future, how can we learn from communities working on the frontlines? Which tools and practices are we leaving behind, and which are we carrying forward?

This April 22, we’re excited to team up with If Not Us Then Who? and the Mesoamerican Alliance of Peoples and Forests (AMPB) to present ‘Urgent Conversations on Earth Day’, supported by the Ford Foundation – an online event about the vital links between design, climate action & ancestral knowledge. Through two live conversations and a short films programme, we’ll explore how indigenous wisdom can guide us in designing a better future, and discuss how creative activists can engage in fair exchanges between cultures.

Concepts of circularity and sustainability might seem novel for some, but Indigenous communities have been practicing these ideas for thousands of years. Historically and today, Indigenous design techniques have had positive effects for people and the planet alike.

Speaking on the panel are Porfirio Gutiérrez, textile artist; Paulina Garrido, President of Tosepan and Margarita Lool Sutuj, social entrepreneur and president of Tikonel. The conversation will be moderated by Plaqueta, activist and journalist. In addition, there will be a Cosmovision message from the voice of María Pedro de Pedro of AMEDIPK and Utz Che ‘.

WATCH IN SPANISH / WATCH IN ENGLISH 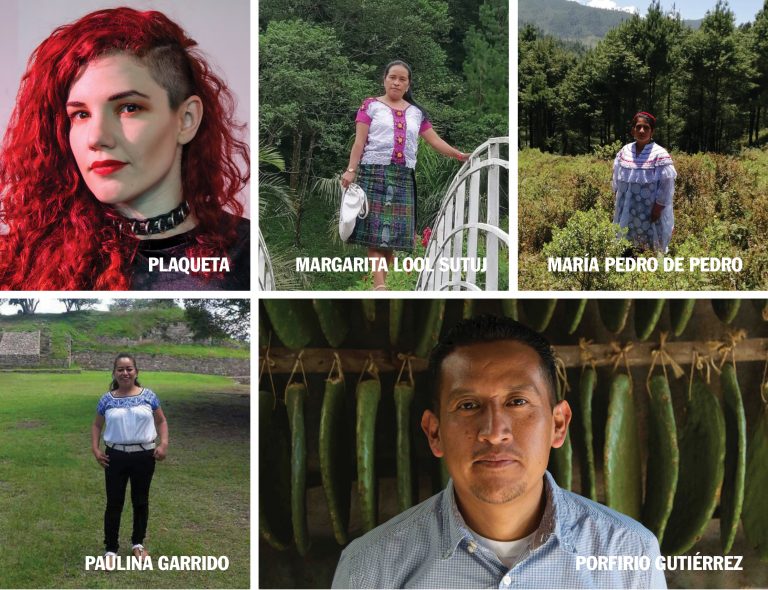 If Not Us Then Who? brings us an inspiring selection of short films. Through these mini-documentaries, four Indigenous communities around the world — the Embera, Sapara and Sasak peoples — tell their stories of resilience and experiences protecting the planet.

There’s a lot to learn from Indigenous communities’ design practices, rooted in thousands of years of craftsmanship that finds inspiration in traditional elements and practices meaningful to each indigenous community.

How can the global creative community enter into a fair exchange of knowledge across cultures, while ensuring that traditional methods and designs give credit to indigenous processes and creations? What practices can creatives adopt to ensure that this exchange protects and benefits indigenous communities?

Joining us for this talk are David Hernández Palmar, filmmaker and curator; Yásnaya Aguilar, linguist, author and activist, and Guillermo Jester, fashion designer, while Plaqueta will return to guide the dialogue.

WATCH IN SPANISH / WATCH IN ENGLISH

Join us on 22 April for any (or all!) of the three sessions. We’ll be streaming live in Spanish via Facebook and English via YouTube starting at 17:00 CDT / 18:00 EST. If you’d like to send us questions or input, simply drop a comment below or reach out to us on social media. We hope to see you there!

Guillermo Jester | Ciudad de México (México) | Fashion Designer
Founder of the homonymous non-binary brand that has positioned Mexican artisan design on different fashion platforms. Currently, in addition to continuing to work with his brand and marketing in various stores in the country, he is part of the international project of Aid to Artisans in Mexico, collaborating with artisans from Chiapas and the Yucatan Peninsula.

Levi Sucre | Bribri, Talamanca (Costa Rica) | Indigenous leader
Director of the technical management and organization process of the RIBCA, a group of eight indigenous territories in Costa Rica. He also coordinates the Executive Commission of the Mesoamerican Alliance of Peoples and Forests (AMPB). He is a farmer and specialist in indigenous organizations, cultures and the environment of Central America. He comes from the Bribri Talamanca indigenous community in Costa Rica, and has more than 20 years of experience in rural development and community organization, and 15 years of experience in designing, implementing and evaluating projects in indigenous territories and local communities.

Paulina Garrido Bonilla | Nahua, Cuetzalan, Puebla (México) | President of Tosepan
President of the “Consejo de Administración de la Unión de Cooperativas Tosepan” and the first woman to hold this position. She is currently responsible for the administration of the civil association Yeknemilis A.C. and is a member of the “Comité del Ordenamiento Territorial Integral” of the Municipality of Cuetzalan, Puebla, representing the union of “Cooperativas Tosepan”.

Plaqueta, Tamara De Anda | Ciudad de México (México) | Journalist and activist
Plaqueta studied communication at UNAM, and is one of the most widely read bloggers in Mexico. Today she is the host of Itinerary on Channel 11 and part of the feminist comedy group Standuperras, with whom she does the radio program # ggg at NoFM. She is co-author of the books #AmigaDateCuenta (2018) and #TuBarrioTeRespalda (2020), published by Planeta.

Porfirio Gutiérrez | Zapoteca, Teotitlan del Valle, Oaxaca (México | Zapotec textile artist and natural dyer
His life’s work has been to revitalize and preserve traditional Zapotec natural dyeing techniques by reinterpreting traditional textiles and materials to reflect his distinctive creative vision. The history of his art has been told in international media. In 2015, he received the Artist in Leadership Award from the Smithsonian Institution. His work is in the collection of the National Museum of Popular Cultures, Fomento Cultural Banamex and the Smithsonian’s National Museum of American Indian. A selection of Gutiérrez dye materials was also documented and incorporated into the Forbes Pigment Collection of the Harvard Art Museums, the world-renowned archive of materials for artists.

Yásnaya Elena Aguilar Gil | Mixe, Oaxaca (México) | Linguist and author
She is part of COLMIX, a group of young Mixe people who carry out research and dissemination activities on Mixe language, history and culture. She studied Hispanic Language and Literature and received a Master’s degree in Linguistics from UNAM. She has collaborated in several projects on the dissemination of linguistic diversity, development of grammatical content for educational materials in indigenous languages, and documentation and attention to languages at risk of disappearing. Has been involved in the development of written material in Mixe and in the creation of Mixe-speaking readers and other indigenous languages. Has been involved in activism for the defense of the linguistic rights of indigenous language speakers, in the use of indigenous languages in the virtual world and in literary translation.