In Warsaw, there exists a community that calls itself Slonecznik, which means ‘sunflower’ Polish. I am an active participant in this community, which was created on the 24th of February 2022, when Russia invaded Ukraine. The initiative came from local performer and activist Taras Gembik, a Ukrainian citizen who has lived for a long time in Warsaw. He works for the Museum of Modern Art here in the city, and the institution ended up providing the space and financial support needed for the community.

As you might have guessed, Slonecznik is a community that was formed to support all kinds of refugees who were passing through Warsaw to find a safe place outside of Ukraine. The first activity that we took on was the preparation of meals for people who were standing in line at the Polish border or who had just arrived at a Polish railway station. All day long we kept the doors open as volunteers came to help: bringing more ingredients, making more sandwiches, and delivering them to those in need. We received people from Ukraine, Nigeria, Chechnya, and Iran — and everybody was welcomed with hot drinks and sandwiches. On weekdays, people would stay late to participate in events like poetry reading and drawing sessions. Very quickly, Slonecznik became a place for people to express themselves and raise their voices again after being silent and shocked by the terrors of war. 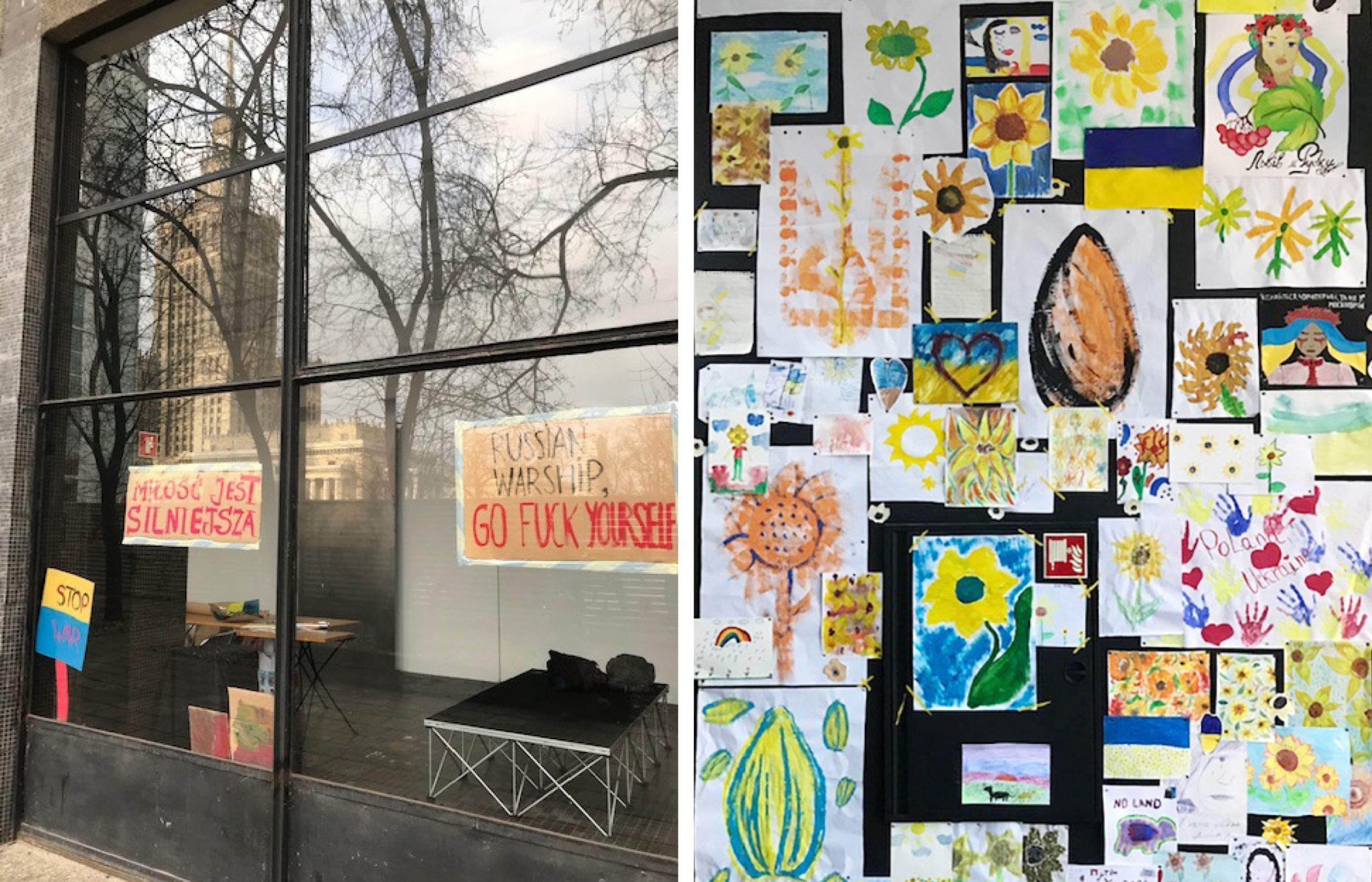 Left: The Slonecznik community centre from the outside. Right: A wall of art made by participants. Both taken in March 2022.

As the sunflower has many little seeds that effortlessly take flight, so the community started to grow and attract many creative and culturally-oriented people. We hosted several cooking sessions, where there was a possibility to cook and taste Ukrainian dishes. There were also a number of workshops where people could make a new piece of garment from old clothes, experiencing in practice the benefits of upcycling. On another day, we planted sunflower seeds in the neighbourhood. The idea has a more political rather than environmental message, but either way new sunflowers now decorate the streets of Warsaw.

When summer came, open kitchen workshops and charity picnics were organised by the community. People were invited to sell old clothes, handmade things, artworks, vinyl, and sweets. The money went to the needs of the Ukrainian army, and local charity organisations which helped people to overcome the devastating consequences of war. These events brought so much joy, strengthened connections among people, and let them create beautiful memories of the summer. For many of us, Slonecznik has started to feel more like a family than the solidarity cultural community it was designed to be at the beginning.

Still, the main purpose of Slonecznik is to make arts and culture more accessible during a difficult time, as well as to establish social and political discourse on topics like decolonisation, gender equality, and post-war consequences. We’ve had many guests visiting the community centre and sharing their artistic practices and visions, leading entertaining workshops and discussions. 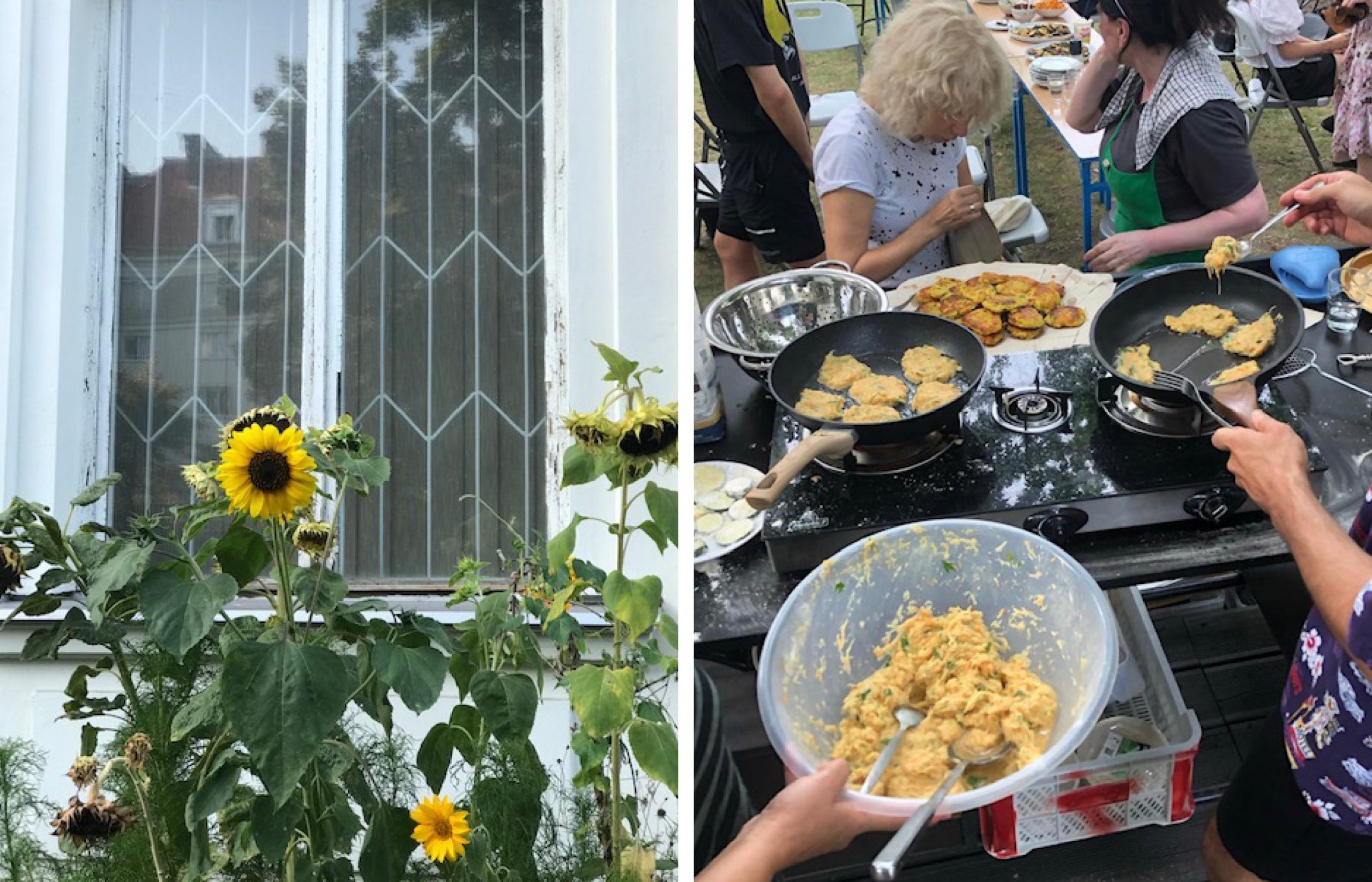 There is little or almost no explicit discussion about climate change or the environment within these activities. However, I am realising now that these conversations do take place at Slonecznik — only in an unconscious way. Last month, Yuri Yefanov, a Ukrainian artist and filmmaker, visited Slonecznik to give a lecture about his unique practice. Nature was a core inspiration for Yuri. One of his projects involved observing the clouds in the sky and documenting their shapes and movements. He also shared a short movie he made, which was a sort of a parody about the ‘unethical usage’ of plants and animals by various artists. It was funny and a little bit absurd, but it also raised awareness among the community about how humans treat nature, whether in pursuit of art or profit.

Slonecznik also hosts movie nights, where contemporary Ukrainian films are shown and then there is a possibility to discuss and share impressions. One that we recently watched is called Atlantis. The film tells the story of Donbas, the consequences of war, and people’s undying desire to live and love. It shows a different post-war reality where there is a limited amount of clean water, where the majority of the land is mined, and the homeland becomes a dangerous place to live. It struck us that this is what is happening at this moment in Ukraine, where large hectares of land are bombed and destroyed, where there is no supply of water in occupied cities, where zoos, parks, lands, and forests are disappeared forever. When it comes to the impact that the Russian invasion has had on Ukrainian nature and on climate change, the full extent of the damage is still yet to be revealed. What could be more destructive and harmful for the planet, than war? In Slonecznik we talk about this and we grieve together. We have also started to gather donations to send to activists and environmentalists in Ukraine. 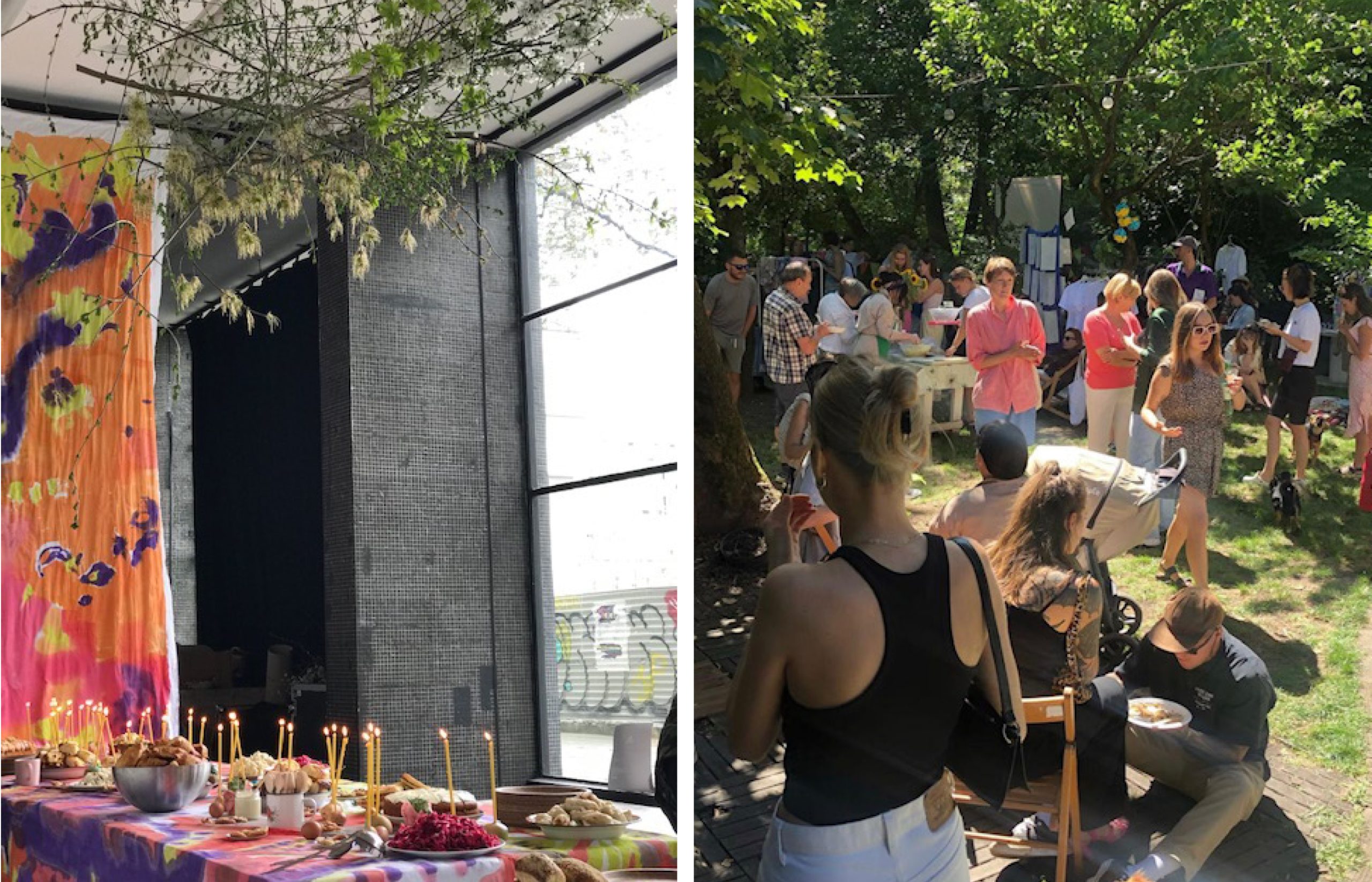 A COMMUNITY WITH AN OPEN DOOR

As it has grown, Slonecznik has opened its doors to many different people. Everybody is welcome: Polish, Belarussian, English, Canadian, from Kazakhstan and Georgia. We also have a Russian refugee, who is a part of our family too. Everyone can find support in Slonecznik. It is a multi-disciplinary community that covers many goals. The main one is to use art as a means to support the Ukrainian people through the war. Another goal is to educate others about the current situation on the frontline and break through the Russian propaganda spreading around Central Europe. Slonecznik is also a platform that allows people to share their opinions, and points of view, to tell their stories about their countries and people, to feel free and have a possibility of self-expression. Many projects and initiatives are done together.

In writing this, I realise that I could have paid more attention to the topic of climate action, and how our community relates to it. But putting an end to the war would be the best solution to stop the potential climate crisis in Ukraine and Europe caused by Russian threats to commit a second Chernobyl or even worse. Obviously, our focus has shifted a bit. But there are still sunflowers being planted, lectures being made about nature from artistic perspectives, reflections on the post-war environmental problems, as well as workshops on repair and recycling and the organisation of regular flea markets. We also try to make our day-to-day choices as environmentally conscious as possible. When we host our charity picnics, we leave no waste behind. When it comes to food, we only serve and cook vegetarian and vegan dishes. It might sound funny that I mention this, but it is a big deal for people from Ukraine and Poland, where the majority of dishes in the national cuisine are meat-based. Serving plant-based food at community events is also an educational point to raise awareness about the environmental impact of our meals. 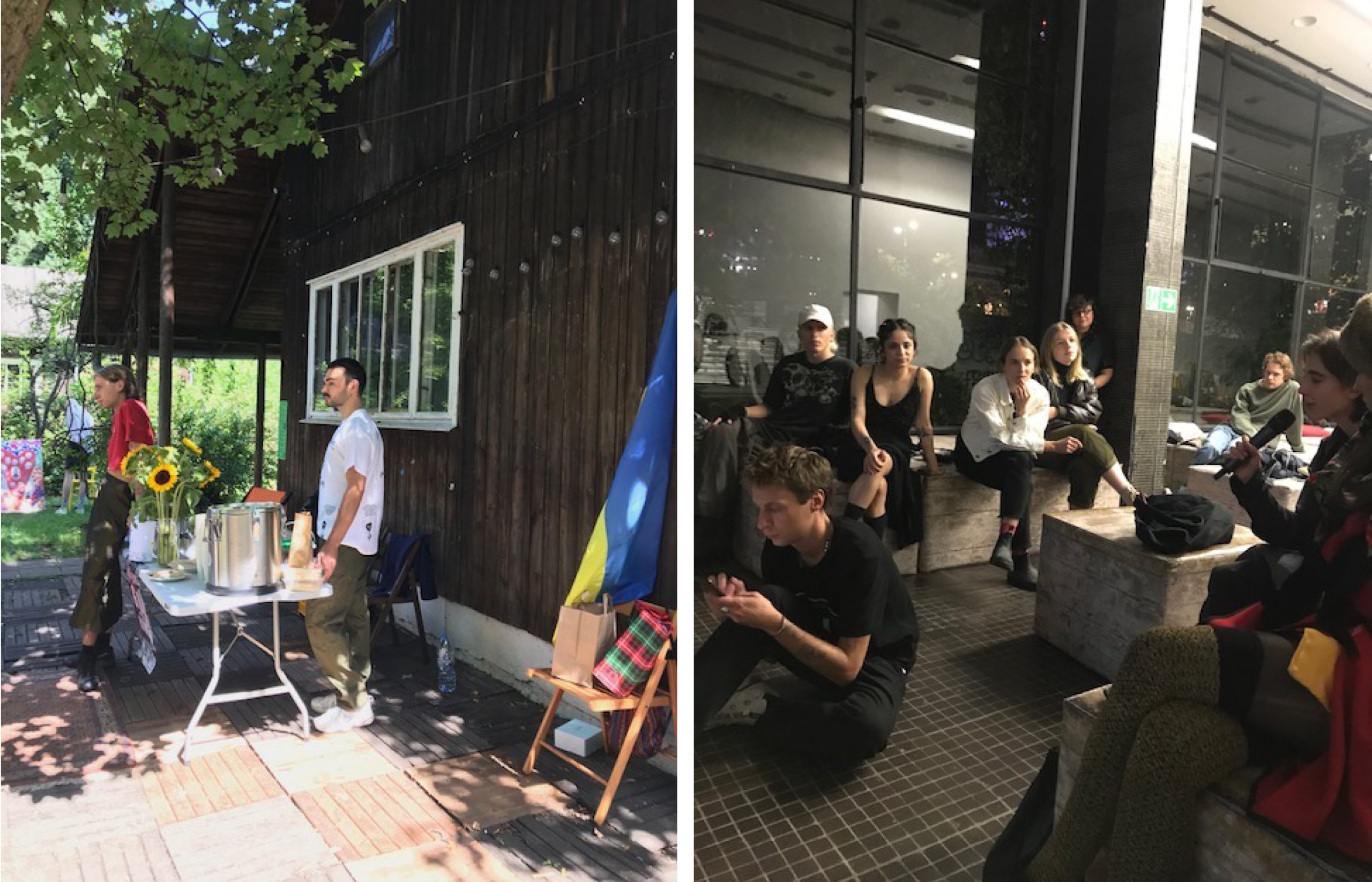 Left: Preparing for a charity picnic, August 2022. Right: Discussions during the lecture at Slonecznik, September, 2022.

Today the people of Slonecznik are floating around Warsaw and beyond as beautiful sunflower seeds. Where we are planted, we give love, support, and understanding to all people who we meet. I am one of the sunflower seeds and I felt an urge to talk about this amazing community with you. Come and visit Slonecznik in Warsaw! You are more than welcome.

Top image courtesy of Slonecznik. All other images by Maria Miakotsina.

Maria Miakotsina is a Belarussian-born, Warsaw-based activist and art lover. She takes active part in the Ukrainian solidarity community Slonecznik, that helps diverse groups of immigrants find home and safety in Warsaw. Currently, Maria is training in curatorial practices, moving towards organising social and cultural Belarussian events in Warsaw.