What Design Can Do is teaming up with Dezeen to present a programme on social justice in design. This Friday, we’ll talk about power, privilege and change in the creative industries, during three live conversations as a part of Dezeen’s Virtual Design Festival.

We’re hosting a roundtable around Decolonising Design with Anoushka Khandwala and Sunny Dolat, to unpack how colonialism has shaped the way we teach, value, and practice design. To emphasise the need for radical systemic change, we’ll also discuss the ways that we — as individuals and as an industry — can champion processes that empower instead of oppress. Designer and writer Anoushka Khandwala introduces what it means to decolonise design and how to contextualise this within the recent mobilisation of the Black Lives Matter movement.

There’s an article published on AIGA Eye on Design, on the topic of the cult of hero worship within graphic design culture, where Aggie Toppins articulates something that I’ve been struggling to do myself. ‘As a field, we should stop perpetuating the idea that designers are singular change-agents who act on culture from outside of it. Rather, we should make visible the complex social worlds in which designers practice.’

Design does not exist in a vacuum. It disappoints me that in many art schools, this is how the discipline is taught—the idea that graphic design, alone, can save the world, is a frustratingly myopic view. Toppins writes about the ‘social forces that surround design as a practice’, such as ‘labor, technology, or politics’.

In recent months, it’s safe to say that our culture has undergone a massive shock. There have been plenty of articles written about how the coronavirus will impact the design industry, so I won’t dwell too much on that. Instead, I’ll focus on the mobilisation of the Black Lives Matter movement following the murder of George Floyd.

On May 25th, 2020, George Floyd was murdered by a police officer (and watched by three others who were complicit in his killing). In him, we saw the continuous loss of Black life as a result of police brutality, which in turn is borne of systemic racism. As I write this, three weeks later, the Black Lives Matter movement has gained a worldwide momentum that the world hasn’t witnessed since Michael Brown was shot in Ferguson, Missouri, in 2014. There’s been an online outcry, particularly from white people, who have been once again awakened to the idea of systemic racism and want to do better. 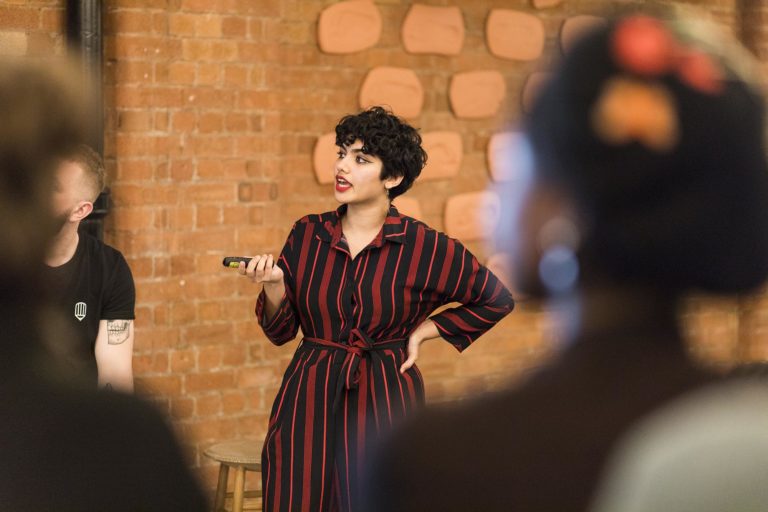 Recently I was privy to a discussion where people expressed the fear of being called out online for saying the ‘wrong’ thing. This is understandable. We live in a culture where what we post online, or how we act in our personal lives, can have life-wrecking consequences. However, this fear can often overwhelm our ability to act—it’s easier to sit silently, than to stick your neck out with good intentions only to be called out. This is not to denounce or to validate this culture, but to contextualise the society in which we’re living. In fact it’s the perfect metaphor for the difficult, messy fight against racism. To be called out is to experience a learning opportunity and, albeit scary, the accountability will make you a better ally.

So what the hell does this have to do with design? Since penning an article for AIGA Eye on Design last year on what it means to decolonise design, the events of the last few weeks have forced me to shift my understanding of decoloniality and anti-racism. I’ve previously written about the importance of decolonising design history, labour and values (you can read more here), however, what I’ve come to realise, is that in anti-racist work, it’s more important to focus on who we are as human beings, rather than just as designers.

it’s more important to focus on who we are as human beings, rather than just as designers

Recently, designer Vanessa Newman (@fiveboi), launched Design to Divest, a group of designers who meet weekly to design graphic material for Black organisers. Over 500 people signed up, of which 6%, Newman estimated, were Black. Newman posted again a week later, shrewdly cautioning non-Black designers against offering pro-bono services to Black causes unless they are actively doing the work to be an ally, and decolonise their design practice.

In times of crisis, designers rush to offer our services—as if we can adapt to any design challenge, without truly understanding our audience and purpose. We think our livelihood is the most valuable thing we can contribute to any given cause. This distances who we are from what we design, as if lived experiences and privileges don’t actively inform what we make. We forget that it may be more valuable to first contribute in terms of self-education, money, emotional support, or voluntary services. Design is not always the answer to everything. This simple truth goes against what we’ve been educated to believe: the cult of hero-worship, and that graphic design can save the world.

Studying history helps us understand how wider culture shapes design trends. Toppins writes about how modernism introduced an aesthetic of simplicity in reaction to a culture of scarcity following two World Wars. Rather than just looking at the Bauhaus as a particular style, we must consider its context. Studying the cultural context that we’re in today, means learning about the history that has shaped these discourses.

In fact, to truly design successfully, we must cast design from our minds momentarily, and think about what we can do to understand the world in which we’re designing. To contribute to social change, we need to acknowledge that we are deeply flawed humans who inhabit a complex network of oppressions and privileges. It’s integral to understand this system, if we’re going to design within it.

To educate yourself on anti-racism is to understand that by simply existing you are complicit in a structurally racist system. Once you understand this, you will realise that if we do not work to disrupt this system, we will reproduce the same ideas, aesthetics and politics that perpetuate white supremacy. This insidious beast manifests in different ways, from murders instigated by police brutality, to microaggressions in the workplace. We need to invest our time, money and emotion into disruption of the status quo, from researching the history of Black culture and identifying when it’s being appropriated, to speaking out when a colleague makes a racist statement under the guise of ‘humour’ and regularly buying from black owned businesses.

Decolonising design practice and diversifying design labour are two powerful tools to utilise in this fight to disrupt—one cannot happen without the other. The industry has seen a shift in recent years where people understand that diversifying their staff team is important, but creating an environment where a person of colour can thrive, rather than just survive, has been overlooked. A diverse staff team working towards the same aims as a homogenous one, and not using their skills to educate and disrupt, will fail in their fight against white supremacy—they are just as complicit. Conversely, decoloniality is difficult to achieve without a diverse range of voices in the room. And so to disrupt, we must diversify and decolonise, for one without the other will result in superficial change, which is not true change at all.

Anoushka Khandwala is a designer, writer and educator exploring what it means to diversify the design industry and decolonise design practice. Anoushka’s work has appeared on Creative Review, AIGA Eye on Design and Elephant. She’s spoken at Airbnb HQ for Grand Matter, ustwo with Ladies Wine Design and at University of the Arts Berlin as part of the ‘Don’t Mention BRxxxt’ lecture series. She currently teaches at Central Saint Martins and Camberwell College of Arts.

In partnership with Virtual Design Festival, What Design Can Do is excited to present a programme of three urgent conversations around social justice in design on Friday June 19. Join us as we invite leading voices in the creative industry to discuss the essential work of creating a more sustainable, inclusive and fair world.