Cycling activist and WDCD-alumnus Aline Cavalcante from São Paulo is in the Top 5 of Urban Visionaries selected by Americas Quarterly. Cavalcante is depicted on the cover of the magazine and heralded for her persistence in promoting bicycle use in her city.

A traffic accident with fatal consequences for a cyclist caused Aline Cavalcante to start campaigning for more space for cyclists in São Paulo in 2009. She co-founded the cyclist’s association Ciclocidade to promote bicycle use in the city where only 1 percent of the inhabitants travel mainly by bike. A quarter use cars, while another 48 percent travel daily by bus. A 2015 research showed that São Paulo was the fourth most deadly for cyclists among 18 Latin American cities. 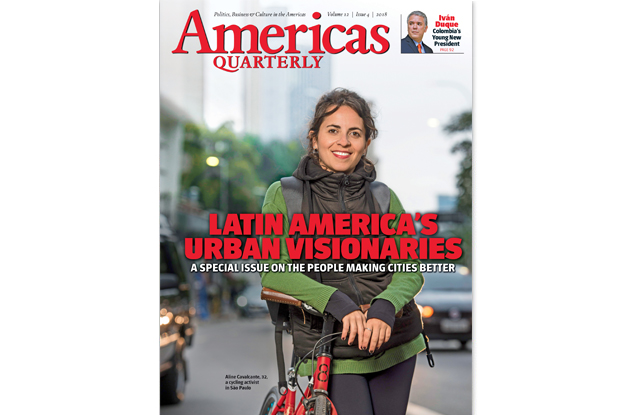 Aline Cavalcante on the cover of Americas Quarterly

In 2015 Cavalcnte celebrated her biggest victory when she convinced mayor Fernando Haddad to close São Paulo’s central road, the Avenida Paulista, on Sundays for road traffic. Shop owners along the road, who were concerned at first, discovered the opening of the road to cyclists and pedestrians actually meant better business. Mayor Haddad of the Worker’s Party also decided to build 250 additional miles of bike lanes in the city.

When Haddad in 2016 lost elections to João Doria, a businessman from the more conservative Brazilian Social Democratic Party, the bike lane building programme was stopped. However, in April of this year Doria decided to run for governor, reason why he was replaced by a new mayor, Bruno Covas. Covas surprised by proposing the construction of more than 850 additional miles of bike lanes in the next decade. New bike sharing programs have also been announced.

But Cavalcante was sceptic, because no bicycle organisations were involved in the plans. With fellow activists she was able to enforce a meeting with the Covas. Afterwards she was confident that things would turn for the better. ‘We demonstrated strength, coherence and a will to contribute,’ she told Americas Quarterly. ‘Now we have to keep the pressure on.’

We’re confident Cavalcante will succeed in doing so.

The other urban visionaries

The other Top 5 Urban Visionaries are Buenos Aires mayor Horacio Rodríguez Larreta, who invested heavily in infrastructure and education to reduce inequality, Jhony Fernando Fernández, a former gang member from Cali, Colombia turned into community leader and peacemaker, Ricardo Mora, a Mexican entrepreneur who created a start-up incubator to attract talent and investment to the depressed border region, and Raisa Banfield, a Panama City architect-turned TV host raised her voice in defence of the environment.