If you were on The Internet this week, you’ve probably seen a video of kids playing on a set of pink seesaws installed on the border wall between the US and Mexico. Architecture studio Rael San Fratello, by Ronald Rael and Virginia San Fratello, brought life to the ‘Teeter Totter Wall’, after making the first sketches back in 2009.

The artful play installation, which was set up temporarily for 30 minutes on Sunday at the border of Colonia Anapra, a community on the western side of Ciudad Juarez, Mexico and Sunland Park, New Mexico. Although it was a temporary installation, Ronald Rael’s video of the playing kids at both sides of the wall on Instagram went viral within a day.

After working on the idea for ten years, the message might be more relevant than ever: “The trade and labor relationships between the U.S. and Mexico are in a delicate balance. Mexicans throng to the U.S. to find work, but often long to live comfortably in their own country. U.S. industry and agriculture is dependant upon immigrant labor pools, yet the Department of Homeland Security, Border Patrol, and Immigration and Naturalization Services have made it increasingly difficult to attract foreign labor. The Teeter Totter Wall demonstrates the delicate balances between the two nations.”

The partners, both architects and professors in California, had been working on the topic long before the Trump Administration started their war against asylum seekers. The idea for the installation was born as a result of the Secure Fence Act of 2006, Virginia San Fratello told KTVU in an interview: “What happens to someone on one side of the border, affects someone on the other.” Regardless of which president is in power, San Fratello said that the pop-up playground was created to expose the ridiculousness of separating people. 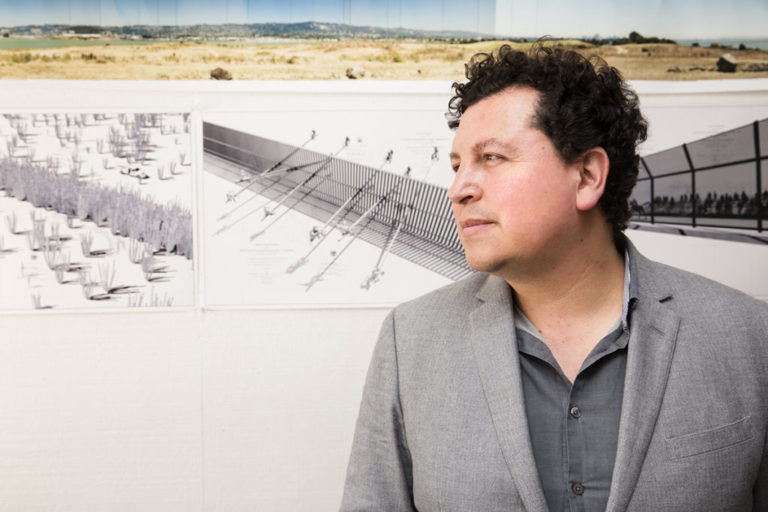 As a result of the media attention the seesaw received, Rael’s latest book ‘Borderwall as Architecture: A Manifesto for the U.S.-Mexico Boundary’ stormed to the top of many best-seller lists and even sold-out on Amazon. Drawings and models from the book are in the permanent collections at the Moma in New York and San Francisco. As an architect, Rael reimagines the physical barrier that divides the United States and Mexico, from satirical and activistic ideas to serious works of art inspired by the borderlands. “There are not two sides defined by a wall. This is one landscape, divided,” Rael says.

“I think it’s important that architects are paying attention to the spaces in between the borders. They should be designing for the places, people and landscapes that the wall endangers.”

His ideas about borders were inspired by a quote by architect Hassan Fathy, who said: “Architects do not design walls, but the spaces between them.” In a TED Talk Rael gave last year, he challenges the idea of a border and the role architects play in this concept: “I think it’s important and urgent that architects are paying attention to the spaces in between borders. They should be designing for the places, people and landscapes that the wall endangers. While the purpose of a wall is to keep people apart and away, it’s actually bringing people together in some really remarkable ways.” reimagines the physical barrier that divides the United States and Mexico — sharing satirical, serious works of art inspired by the borderlands and showing us the border we don’t see in the news. “There are not two sides defined by a wall. This is one landscape, divided,” Rael says.

One of the most incredible experiences of my and @vasfsf’s career bringing to life the conceptual drawings of the Teetertotter Wall from 2009 in an event filled with joy, excitement, and togetherness at the borderwall. The wall became a literal fulcrum for U.S. – Mexico relations and children and adults were connected in meaningful ways on both sides with the recognition that the actions that take place on one side have a direct consequence on the other side. Amazing thanks to everyone who made this event possible like Omar Rios @colectivo.chopeke for collaborating with us, the guys at Taller Herrería in #CiudadJuarez for their fine craftsmanship, @anateresafernandez for encouragement and support, and everyone who showed up on both sides including the beautiful families from Colonia Anapra, and @kerrydoyle2010, @kateggreen , @ersela_kripa , @stphn_mllr , @wakawaffles, @chris_inabox and many others (you know who you are). #raelsanfratello #borderwallasarchitecture