As with every year, March 8 marks International Women’s Day. This date is a chance to reflect on the progress made on women’s rights, and a reminder of the constant risk and oppression in which many women still find themselves around the world. A problem that remains present—exacerbated, even—in the abnormal conditions of a global pandemic. It is becoming increasingly clear that we need to do more than ask for the change we want; we have to demand it or, rather, create it. In that sense, it is about making space for ourselves in a place which historically erases our stories and ideas.

To shine a light on this work, today we will meet two Mexican artists who are taking their industries by storm, and seeking to weave support networks for those who come after them.

Clayre created fashion label Casilda Mut ten years ago. Since then, she has committed to building a collaborative practice with local artisans from Chiapas (the state in which she was born), and to the generation of a local garment industry. Through the creation of each piece of clothing, she spins a story between women who bring creativity and talent at every step. Aguacatenango artisans make embroideries that gather a blouse; while pattern makers in the workshop create new volumes and seamstresses delicately finish each piece. 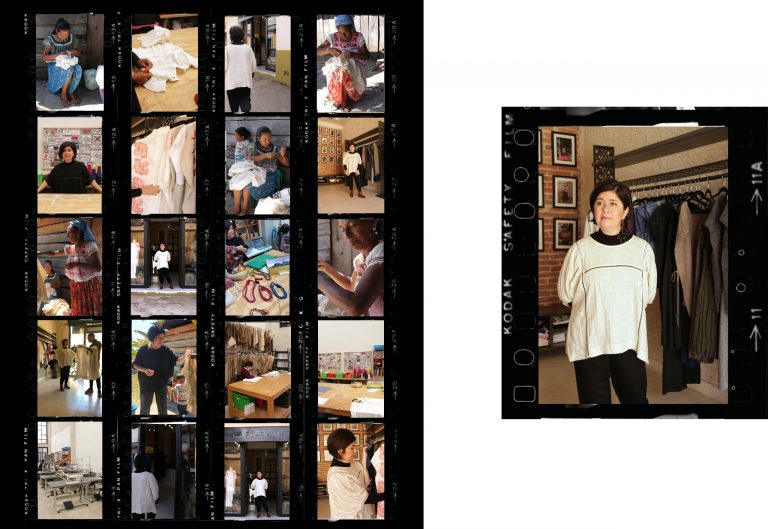 Based in a state far from Mexico City, Clayre sometimes feels like an alien in her industry. In Chiapas, little is visible about what happens in terms of fashion in other cities, but for her this isolation has been a creative trigger. For example, for Endemic, her previous collection, Clayre’s team conducted an ethnobotanical study of plants from Los Altos, Chiapas. Now, through Woman Bird, the brand communicates a sense of reinvention based on the connection of each woman with her own vulnerability.

On weaving networks between women

Over the years, Clayre has become a skilled entrepreneur. She understands her industry and is prepared to take risks; she seeks to develop a business model that allows her to make an impact in a conscious way. She believes that social networks allow us to better know and understand our market, to be empathetic to our customers and to communicate our work ethically.

One of Clayre’s main objectives is to maintain the close-knit production chain she has created in her workshops. She also seeks to motivate and uplift other women in the community by promoting the development of trades. And Casilda Mut is also always looking to connect with other women in their points of sale and e-commerce so that a network emerges.

Clayre believes that there are still many spaces that must be won by women; political, social, economic and cultural. Of course we need more women leaders, that’s for sure. But speaking particularly of the women of her community, there is a long way to go.

“In our experience working with women from indigenous communities, we have noticed that through gainful employment and remuneration, they begin to access a different role in society, where they contribute significantly. For us, the development of our art goes beyond the creative process, it is the means to empower women in our field. I know it seems like a utopia—but I imagine women breaking paradigms, finding freedom and a deep love for herself.” 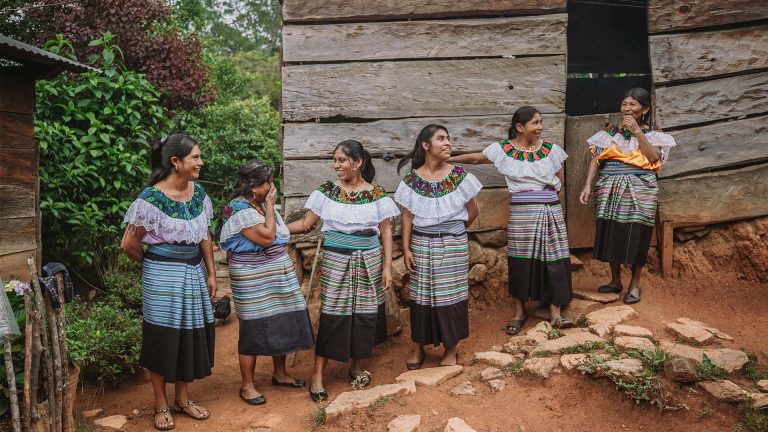 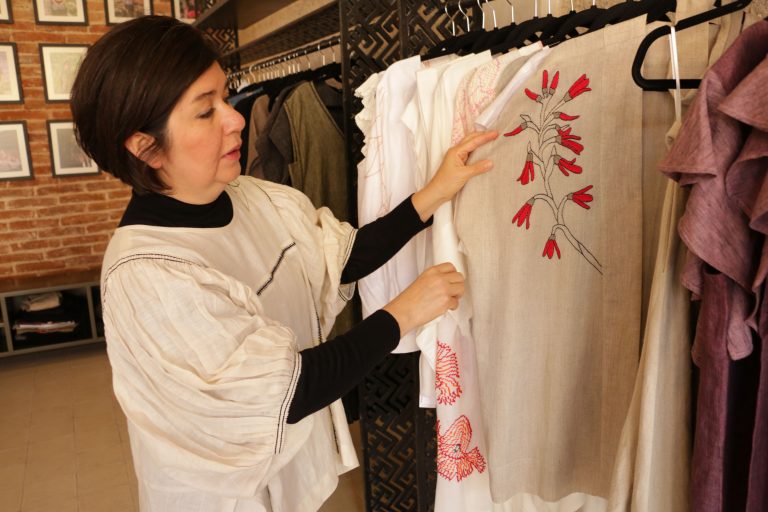 Carmen Serratos is an artist from Hidalgo. She seeks to highlight issues such as gender roles and femininity, exploring how institutions, family and religion continue to shape society. In her work, she uses textiles and drawing as the main medium to make very personal readings of the context in which she finds herself.

For Carmen, textiles have always been present in her life. She grew up watching her grandmother sew for her. Her mother always told her that the most important skill or trade to have was the capacity to make your clothes yourself. However, it was not until later in her career that she remembered how much textiles meant to her. 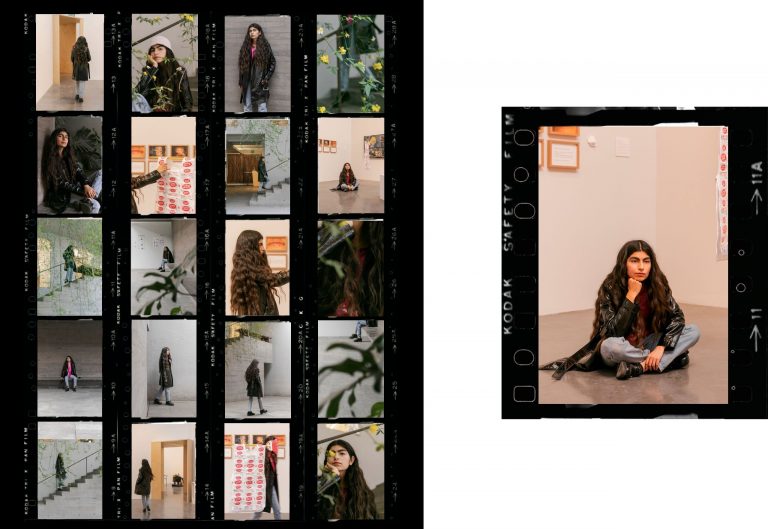 From there she began to experiment, appropriating techniques that over time have been dismissed for ‘belonging’ to women or the feminine. She reworks them to create unique interpretations of everyday objects. Through her art, pre-established concepts are questioned, and dialogues are opened, seeking to visualize other possible paradigms. In works such as: “Fama de Casa” (2018) and “Envoltura Doméstica” (2020), which is currently exhibited in the exhibition SEXwork at Salón Silicón at the Kurimanzutto Gallery, Carmen makes space for herself in a place where she would not traditionally be visible. 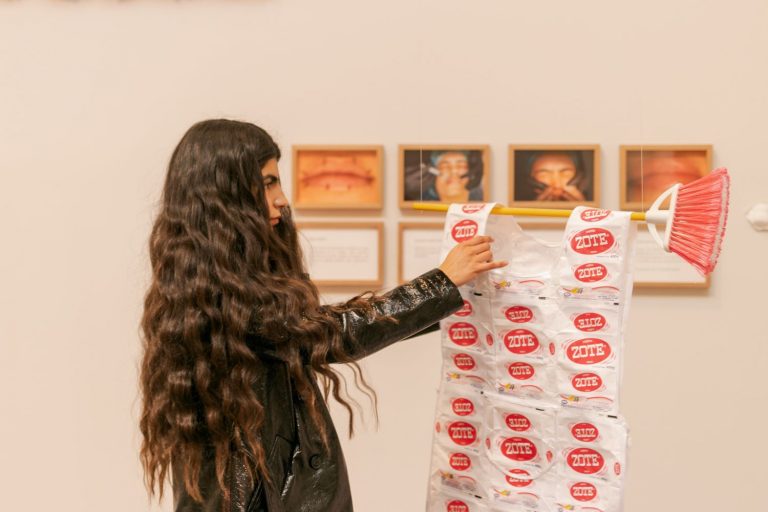 “It is important not to wait for other spaces to invite us or make us visible, but rather, to do it ourselves, and to generate our own spaces. And well, little by little, it is difficult but I think it is important to make ourselves visible.”

With this belief, at the beginning of the pandemic Carmen joined forces with a friend to create a collective on Instagram with the name of Caprichosas. In it, they invite other women artists to exhibit their work, providing a platform for them to sell their work.

Still, Carmen believes that there is a long way to go for women when it comes to gaining space and equal opportunities. For example, politically, in regards to the enforcement of laws and commissions that really protect women in Mexico. Reports of abuse must be taken seriously and processed. At the same time, she does not forget the positive changes that have been made, such as the approval of the Olympia Law, a set of legislative reforms in some states of Mexico aimed at recognizing digital violence.

For now, Carmen will continue studying visual arts at La Esmeralda, and showing her work in different exhibitions around the country.

For more profiles of visionary women in Mexico’s creative industries, follow the complete series at Coolhuntermx.