Dronecoria (Dronechory) is a collection of tools for a revolutionary ecological restoration. Dones, precision aerial seeding of seedballs, and efficient microorganisms create green, large-scale landscapes at a low cost. The technology allows for industrial scale restoration, with the potential to sow a combination of millions of trees and herbaceous plants for carbon fixation. The power of open-source technology, digital fabrication, and a worldwide community of ecologists, combine to create huge reach and accessibility.

Dronecoria represents a new area of symbiotic species, produced by biological and technological processes. It reveals the potential impact of interaction between ecologies and robotic systems on critical environments. Mechanisms borrowed from cybernetics, robotics and permacultureinspire the affordable wooden drones to sow seeds. Each seedling has the best chance at survival, as the drones accurately determine the best location and eliminate any competition.

The restoration is divided in two phases. First a precision map is made, which uses machine-learning to understand the optimal spot for each seedball. Then the sowing process is made in a flight-path. The open-source model allows the project to be scalable, so that a diversity of organisations can plant thousands of trees.

The team is formed by a small group of enthusiasts: a drone engineer, a conservationist, and an architect, whose shared expertise developed this tool to boost forest restoration. 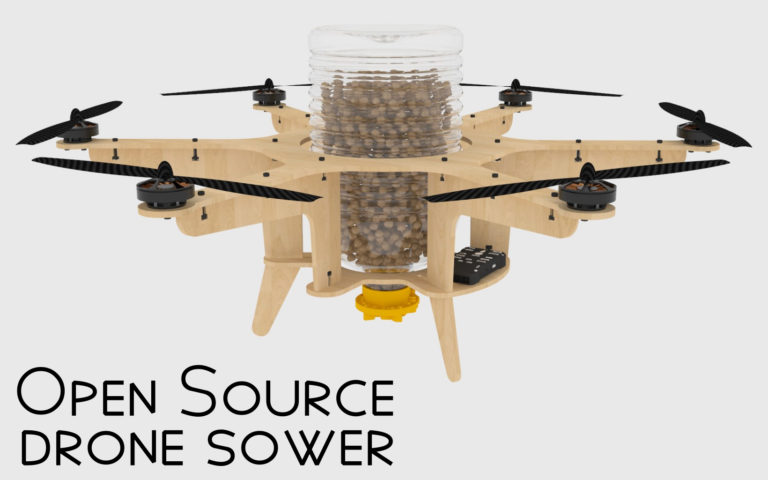 Co-Founder Richard Van der Laken and Radu Dumitrascu, of WDCD’s partner IKEA Foundation, spoke on the success of this project; For Van der Laken, projects like Droncoria represent the ‘seductive power of design’‘getting people on your side for ideas because of the attractiveness of the way they are designed.’, while Dumintrascu acknowledged its diversity and potential reach; ‘This was thought up by two Spanish designers to counteract the effects of the forest fires on the Iberian peninsula, but it could be equally effective in Romania, where I am from. Our national parks there are also being affected by deforestation due to climate change.’

Since 2013, the project has moved from proof of concept, to experimentation with microbiology and seedballs, to developing a seed dispenser for drones, to Climate Action challenge winners.

Lot Amoros, one of Droncoria’s founders,  reflected on the challenge process ‘thanks to the challenge, we had the resources to share our story’

Thanks to the funding and publicity gained from the Challenge, Lot was able to develop the first real-scale prototype of his sower drone. Over the next few years, Dronecoria traveled the world, experimenting with different funding pathways including private donations and Crowdfunding. During this time, the project formed partnerships with Universities in Brazil and Thailand, and continued testing their technology in various countries, and publishing their research on their open source platform. In 2019 they were contracted by Spanish non-profit Alvelal to perform their first official reforestation project, with the goal of dropping 100,000 seeds along 20 hectares of land in the province of Almeria. Follow their blog to learn more about all of their experiments and projects!

Instructions for building your own drone have been published, and are available to anyone to share. Tutorials, expenses, materials and videos on each step are provided, making the project more accessible than ever. Check it out for yourself!

Dronecoria has sown over 9000 seeds in nine locations in Spain.

Five organisations around the world have made use of Dronecoria’s open source plans to build drones.

Their team has grown from two to eleven members since the start of the Challenge programme.

Dronecoria has raised over 20,000 USD since the start of the Challenge programme.