‘People should talk about food as an aspect of culture — as the most important good, as business, as a design product of daily life.’ That’s according to Austrian designers Martin Hablesreiter and Sonja Stummerer. ‘It’s not good that the US president’s wife deals with food, while he does the ‘important politics’. Food is the most important thing we deal with!’

The duo, working under the name of Honey & Bunny, arrived at this conviction after years of studying food production and food design. Struck by the notion that the desire to design food is what separates humans from all other beings, they became interested in the fields of gastronomy, food marketing, psychology, cultural history and anthropology. So far, they have presented their surprising findings in a documentary film and five thought-provoking books, including Food Design (2005), Food Design XL (2010), and Eat Design (2014).

In recent years, Honey & Bunny have become known for their high concept ‘eat design / eat art’ performances, which take on topics like the politics of table manners or the sustainability of modern dining. ‘As designers we have to discuss ethical, sustainable and fair ideas for the daily bread of civilisations’, they explain. Now, more than ever, ‘we have to discuss all the rituals around eating.’

Originally trained as architects, both Hablesreiter and Stummerer continue to combine their work with food with interior, product and stage design projects. They are also regular contributors of newspapers like Neue Zürcher Zeitung and Frankfurter Allgemeine Zeitung. 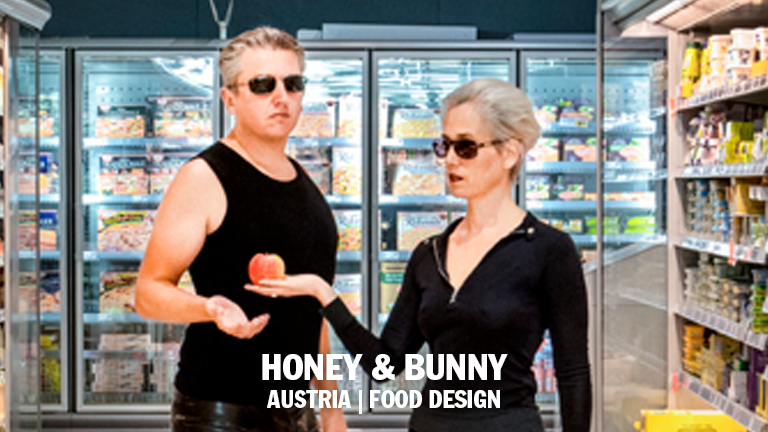